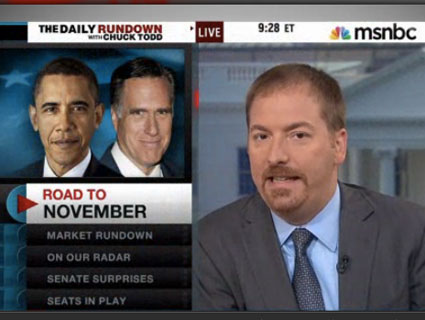 I like Chuck Todd, but he missed the mark this morning when he tweeted:

Immediately folks on Twitter, including yours truly, challenged Todd to specify what he meant regarding the Romney video. (The recently disseminated Obama video showed the president in 1998 supporting “redistribution at a certain level,” but it left out the next sentence in which he talked about the need for fostering competition in the marketplace.) Todd later clarified his tweet a bit: “The only missing Romney context to video I was referring to was on his Mideast remarks. Doesn’t disqualify tape itself folks.” And he referred to an item in NBC News’ First Read tip sheet that noted, “Republicans yesterday jumped all over a Politico piece, noting that a portion of Romney’s comments in that Mother Jones video on Middle East peace (where Romney acknowledges that there could eventually be peace) had been omitted.” First Read noted that the absence of these few sentences did not “negate what Romney also said about the Middle East (that Palestinians don’t have an interest in peace and that a two-state solution isn’t feasible),” but it added that the “whole story” wasn’t told.

Todd did go further in his initial tweet by saying “important context” was missing. Here’s why he was wrong: In the clip Mother Jones originally posted, Romney was asked by one of the guests at the May 17 private fundraiser what he would do about the “Palestinian problem.” In his long and detailed answer, he made these points:

Those statements were all news. Romney has not said this in public, and these remarks contradict his official position (and that of GOP platform). Add that all up and it is clear Romney does not believe the peace process in the Mideast can produce a positive outcome.

After showing Romney explaining all of this in great detail, we ended the clip when Romney started saying that the United States should not lean on Israel. That was merely a reiteration of what he has said many times in public. It was not notable.

Following the release of all the video I had obtained from the source, the Romney camp pointed to a statement Romney uttered after that declaration of support for Israel, when he said that if the US shows “resolve”—by backing Israel to the hilt—”the Palestinians will some day reach the point where they want peace more than we’re trying to force peace on them. Then it’s worth having the discussion. So until then, it’s just wishful thinking.”

The Romneyites claim—a-ha!—that this was missing context and indicated that Romney does not believe peace is impossible.

But how do these vague remarks contextualize his answer to the “Palestinian problem” question? In his reply, Romney said the peace process, as it has been widely envisioned, cannot work because the Palestinians don’t want peace and the two-state solution isn’t feasible. And how significant is a remark noting that some day, at an undetermined point in the future, the Palestinians (whom Romney denigrates as wanting nothing but the end of Israel) may finally come around and then peace might theoretically be possible? The bottom line for Romney: peace is not possible for the foreseeable future.

Romney’s “missing” remarks were vague and not relevant to what he specifically said about the peace process here and now. Imagine if a politician remarked, “there’s no way we can balance the budget in the years to come, but I hope at some point in the future the circumstances might be right.” In that case, a journalist would obviously report that the politician has said budget-balancing was not possible. The rest would mean little. The sentences that the Romney camp is clinging to (as a lifeline) do not provide any greater understanding regarding Romney’s denigration of the peace process and the two-state solution.

It’s no small matter to say that a journalist—and a colleague—has reported news that lacks “important context.” Thus, the need to explain and to take issue with Todd.

The Romney crew, in its post-47-percent desperation, has mounted a disingenuous pushback campaign concerning this one portion of the secret Romney video. It even tried to use this slim point to debunk the entire video—and found itself debunked for doing so. But the real—and big—story is that the original clip and the full video show with no ambiguity that Romney would dramatically alter US policy in the Mideast and that he has not been straight with the public about his real views regarding this important hot spot. There is no missing context that changes any of that.