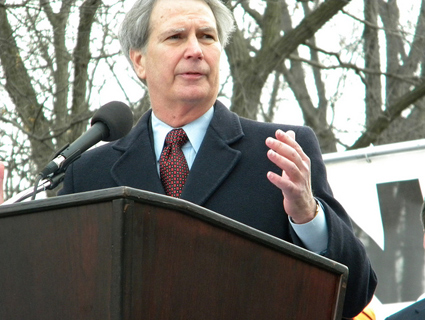 A North Carolina Republican congressman appeared on a notorious white nationalist radio program on Saturday to talk up legislation he coauthored accusing President Barack Obama of committing impeachable offenses. Rep. Walter Jones, a fiercely anti-war congressman who often breaks with his party on key votes, appeared on the Political Cesspool, a Memphis-based program hosted by ardent white nationalists James Edwards and Eddie Miller. The show has been condemned by groups like the Anti-Defamation League and Southern Poverty Law Center for promoting racist, homophobic, and anti-Semitic beliefs. Jones is the first member of Congress to appear on the program.

An avowed white nationalist who says David Duke is “above reproach,” Edwards has referred to African Americans as “heathen savages” and “subhuman” and suggested that slavery was “the greatest thing that ever happened” to blacks. The show’s mission statement is blunt: “We represent a philosophy that is pro-White and are against political centralization,” it declares. It then outlines a series of issues the show exists to promote. “We wish to revive the White birthrate above replacement level fertility and beyond to grow the percentage of Whites in the world relative to other races,” reads one plank. Another bullet point endorses the Confederacy: “Secession is a right of all people and individuals. It was successful in 1776 and this show honors those who tried to make it successful in 1865.”

Edwards’ rhetoric has caught the attention of the Southern Poverty Law Center, which argues that he has “probably done more than any of his contemporaries on the American radical right to publicly promote neo-Nazis, Holocaust deniers, raging anti-Semites and other extremists.” As the SPLC notes:

“The Political Cesspool” in the past two years has become the primary radio nexus of hate in America. Its sponsors include the CCC and the Institute for Historical Review, a leading Holocaust denial organization. Its guest roster for 2007 reads like a “Who’s Who” of the radical racist right. CCC leader Gordon Lee Baum, Holocaust denier Mark Weber, Canadian white supremacist Paul Fromm, American Renaissance editor Jared Taylor, neo-Nazi activist April Gaede, anti-Semitic professor Kevin MacDonald, Stormfront webmaster Jamie Kelso and League of the South president Michael Hill have all been favorably interviewed on the “Political Cesspool” this year, along with former Klan leader and neo-Nazi David Duke, the show’s most frequent celebrity racist guest, who has logged three appearances.

Edwards’ bigotry runs the spectrum. As Media Matters has documented, Edwards has alleged that Jews “run Washington, Wall Street, and the news and entertainment media” and that they’re “using pornography as a subversive tool against” Christians. He defended Mississippi voters who say that interracial marriage should be illegal. (He’s called interracial sex “white genocide.”) Jones is hardly the first prominent conservative to call into the Cesspool. Paul Babeu, a prominent anti-immigrant sheriff who was forced to step down as Mitt Romney’s Arizona co-chair after a gay sex scandal, praised the host in a 2010 appearance on the show. Conservative commentator Pat Buchanan has also appeared on the show; Rep. Ron Paul (R-Texas) had been booked to appear on Edwards’ show but canceled at the last minute, citing a scheduling conflict.

Jones, a shoo-in to win a 10th term in November, is an arch-conservative with an independent streak. An early supporter of the Iraq war—he even went so far as to rename French fries in the House cafeteria “freedom fries”—he had a change of heart (as we explained in a 2006 profile), in large part due to the burden shouldered by families in his eastern North Carolina district, which includes Camp Lejeune. (He supported Paul during the GOP presidential primaries.) Edwards, like Jones, is an avowed proponent of “noninterventionism” who, on his website, calls on the federal government to “stop interfering politically, militarily, and socially outside of the borders of the United States of America.” On the Cesspool, Jones briefly discussed his bill, HR 107, which states that President Obama’s handling of the military intervention in Libya is an impeachable offense.

Jones made a positive impression with his hosts, whom he engaged in friendly banter over the merits of musician Frankie Valli and the musical Jersey Boys. “This is your debut appearance and hopefully the first of many to come,” Edwards said.

Multiple calls and emails to Jones’ office on Monday were not returned.

Update, 9/11/12, 10:20 a.m.: Erik Anderson, Jones’ Democratic challenger, told Mother Jones the congressman needs to clear the air about what happened. “It’s unbelievable that a sitting congressman would think that’s appropriate,” said Anderson, a Marine Corps veteran. “I really would like to hear his reasoning for why he went on there. You just don’t go on a radio show like that and not know who you’re talking to. I’ve been on conservative radio shows, but never a white supremacist one.” But he has one theory: “I’ve said [the impeachment resolution] was racially motivated and that’s absolutely what it was for because why else would he go on that show if it wasn’t?”