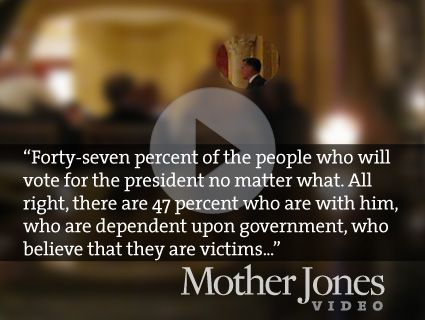 On Monday, my colleague David Corn published exclusive video of remarks Mitt Romney made at a closed-door fundraiser for big-money donors, in which the GOP presidential nominee declared that 47 percent of Americans—that is, those who support President Obama—are “dependent upon government” and “believe that they are victims.” (And, according to Romney, Obama backers don’t pay income taxes either.) Now, the Obama campaign is looking to turn those statements into a major campaign issue. Here’s the statement from campaign manager Jim Messina that was emailed to reporters on Monday afternoon:

“It’s shocking that a candidate for President of the United States would go behind closed doors and declare to a group of wealthy donors that half the American people view themselves as ‘victims,’ entitled to handouts, and are unwilling to take ‘personal responsibility’ for their lives. It’s hard to serve as president for all Americans when you’ve disdainfully written off half the nation.”

It was also blasted out to Obama’s 19 million Twitter followers. For Romney, this may be only the beginning of his problems: more clips from this private fundraiser are coming soon.

Mitt Romney wants to help all Americans struggling in the Obama economy. As the governor has made clear all year, he is concerned about the growing number of people who are dependent on the federal government, including the record number of people who are on food stamps, nearly one in six Americans in poverty, and the 23 million Americans who are struggling to find work. Mitt Romney’s plan creates 12 million new jobs in four years, grows the economy and moves Americans off of government dependency and into jobs.

Update II, 9/17, 10:23 p.m.: In a rare and hastily scheduled press conference in Orange County on Monday night, Romney stood by his remarks. “This is the same message I give to people,” Romney said of his dig at the 47 percent. His only failing, he said, was in the delivery. “It’s not elegantly stated, let me put it that way,” Romney said. “I’m speaking off the cuff in response to a question and, I’m sure I can say it more clearly”

Romney added, “I hope the person who has the video would put out the full video.”

See the full remarks below:

21:57:30: Good evening. I understand there’s been a video that’s been on the internet for a few weeks that has attracted some attention and I thought I would make some comments about it. Apparently it’s got a snippet of a question and answer session at a fundraising event. It doesn’t capture the question so I don’t know precisely what was asked but I think it was about my campaign and how I would be able to get a majority of voters to support me. By the way, whoever has released the snippets would, I would certainly appreciate if they would release the whole tape so we could see all of it. I believe the point I was made is that the president starts off with a large number of the voters, 47, 48, 49 percent, something like that. These are people who are in his camp and uh they will vote for him almost no matter what, and I also have a large number of people who will vote for me almost no matter what, at least I hope so, and my campaign effort is to focus on the people in the middle. The people I will try and draw into my campaign are largely people who voted for Barack Obama last time around and who I want to have as part of my campaign (a little jumbled on my audio here, but think he says “if it is to be successful”).

21:58:30 So it’s a question and answer as I recall about the process of the campaign and how I’m going to get the 51 or 52 percent I need and I point out it’s by focusing on those folks that are neither in his camp nor in my camp.  Of course there’s a very different approach of the two different campaigns, as I point out I recognize that among those that pay no tax, approximately 47 percent of Americans, I’m not likely to be highly successful with the message of lowering taxes.  That’s not as attractive to those who don’t pay income taxes as it is to those who do.  And likewise those who are reliant on government are not as attracted to my message of slimming down the size of government.  And so I then focus on those individuals who I believe are most likely to be able to be pulled into my camp and help me win the 51 or 50.1% that I need to become the next President.

21:59:15 This is, of course, something I talk about a good deal in rallies and speeches and so forth, which is the president and I have very different approaches to the future of America and what it takes to ignite our economy and put people back to work.  The president believes in what I’ve described as a government centered society where gov’t plays a larger and larger roll, provides for more and more of the needs of individuals and I happen to believe instead in a free enterprise, free individual society where people pursuing their dreams are able to employ one another, build enterprises, build the strongest economy in the world.  I happen to believe that my approach is the approach that will put 23 million people back to work again.  We’ve watched the results of the Presidents approach over the last 3 ½ , 4 years, and his government-centric, larger and larger government approach has meant that we have 15 million more people on food stamps, 23 million people out of work or stopped looking for work or underemployed.  We have had 43 straight months with unemployment above 8 percent and my view is that the right approach for our nation is not to adopt a government centered approach, but instead a free, free people, free enterprise, free market, consumer driven approach and that will build the strongest economy for ourselves and for the coming generation.

A: Well, you said a number of things there and I’m talking about the political process of drawing people into my own campaign. Of course, individuals are going to take responsibility for their lives. My campaign is about helping people take more responsibility and becoming employed again, particularly those who don’t have work. This whole campaign is based on getting people jobs again, putting people back to work. This is ultimately a question about direction for the country. Do you believe in a government centered society that provides more and more benefits or do you believe instead in a free enterprise society where people are able to pursue their dreams….

22:01:57 Q2 (Holland/Reuters): Are you not stepping away from anything and do you worry you’ve offended this 47 percent you mentioned?

A: Well, um, It’s not elegantly stated let me put it that way I’m speaking off the cuff in response to a question and I’m sure I can state it more clearly in a more effective way than I did in a setting like that and so I’m sure ill point that out as time goes on but we don’t even have the question given the snippet there nor the full response and I hope the person who has the video would put out the full material. But it’s a message which I’m going to carry and continue to carry which is look the president approach is attractive to people who aren’t not paying taxes because frankly my discussion about lowering taxes isn’t as attractive to them and therefore I’m not likely to draw them in to my campaign as effectively as those who are in the middle. This is really a discussion about the political process of winning the election and of course I want to help all americans, all americans, have a bright and prosperous future and I’m convinced the presidents approach has not done that and will not do that.

22:03:13 Q3 (Haake/NBC): What insurance can you give to voters that you’re not saying different things to people that fund your campaign than you do to people on the stump?

A: “You’re coming to my fundraiser and this is the same message that i give to people which is that we have a very different approach the president and i between a government dominated society and a society driven by free people pursuing their dreams I’m talking about the process of campaigns, typically i don’t talk about process in speeches because I think candidates are wiser to talk about policy and their vision than to talk about how they’re going to win a election, at a fundraiser you have people say governor how are you going to win this? And so I respond well, the president has his group I have my group I want to keep my team strong and motivated and I want to get those people in the middle, that’s something which fundraising people who are parting with their monies are very interested in knowing can you win or not and that’s what this was addressing.”