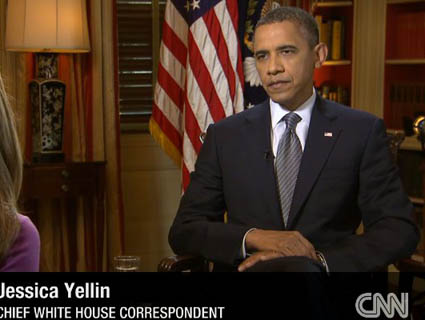 Barack Obama’s administration is still insisting in court that its worst-kept secret—the use of unmanned aircraft to target and kill suspected terrorists—is classified information. But that didn’t stop the president from openly defending the program to CNN reporter Jessica Yellin in an interview that aired Wednesday. Here’s an excerpt from Obama’s remarks, transcribed by Chris Woods at the Bureau of Investigative Journalism:

It has to be a situation in which we can’t capture the individual before they move forward on some sort of operational plot against the United States. And this is an example of where I think there has been some misreporting. Our preference has always been to capture when we can because we can gather intelligence. But a lot of terrorist networks that target the United States, the most dangerous ones operate in very remote regions and it’s very difficult to capture them. And we’ve got to make sure that in whatever operations we conduct, we are very careful about avoiding civilian casualties, and in fact there are a whole bunch of situations where we will not engage in operations if we think there’s going to be civilian casualties involved.

So we have an extensive process with a lot of checks, a lot of eyes looking at it. Obviously as president I’m ultimately responsible for decisions that are made by the administration. But I think what the American people need to know is the seriousness with which we take both the responsibility to keep them safe, but also the seriousness with which we take the need for us to abide by our traditions of rule of law and due process.

As Woods notes, while the administration has tried to keep its “license to kill” secret, this interview actually lays out in some detail what the administration thinks the legal parameters actually are: It can target suspected terrorists with lethal force when they are in “remote regions” where they are difficult to capture, force is necessary to “stop them from carrying out plots,” and civilian casualties won’t be significant. Still, these factors are all evaluated by a secret process within the executive branch, rather than the kind of public and adversarial process used to, say, put someone in prison for life.

Obama also specifically addressed the issue of targeting American citizens—like Anwar al-Awlaki—although he did not mention al-Awlaki by name.

I think there’s no doubt that when an American has made the decision to affiliate himself with al Qaeda and target fellow Americans, that there is a legal justification for us to try and stop them from carrying out plots. What is also true though is that as an American citizen, they are subject to the protections of the constitution and due process.

Understand that when Obama says “due process,” he is referring not to courts, but to an internal executive branch review. Following Attorney General Eric Holder’s speech in March explaining how “due process” here means that nationals security officials evaluate the evidence against an individual before asking higher-ups for permission to vaporize them, comedian Stephen Colbert quipped that “due process just means there’s a process that you do.”

The ACLU is suing the government to force the disclosure of records related to the targeted killing of suspected terrorists, but the government has insisted that this information is secret despite acknowledging, defending, and bragging about the program. In their response brief, the government wrote that “whether or not the CIA has the authority to be, or is in fact, directly involved in targeted lethal operations remains classified. And that is so notwithstanding the unsourced, unofficial statements and media reports that plaintiffs have identified.” The ACLU called this “absurd.”

Obama’s interview with CNN probably won’t alter that position. Moreover, as Wired‘s Noah Shachtman notes, the president has the authority to declassify anything. “If the president felt like talking about the drone approval process, he could,” Shachtman writes. “Obama doesn’t have to leave the discussion up to unnamed officials, former subordinates, and authored leakers.” But then it would be harder to control the public image of the program, which the administration insists doesn’t kill civilians despite the overwhelming evidence that it does.

“A president who doesn’t struggle with issues of war and peace and fighting terrorism, and the difficulties of dealing with an opponent who has no rules, that’s something that you have to struggle with,” Obama told CNN. “Because if you don’t, it’s very easy to slip into a situation in which you end up bending rules, thinking that the ends always justify the means. And that’s not been our tradition, that’s not who we are as a country.” Given the secrecy behind the program however, it’s impossible to know whether the administration is even following its own rules.