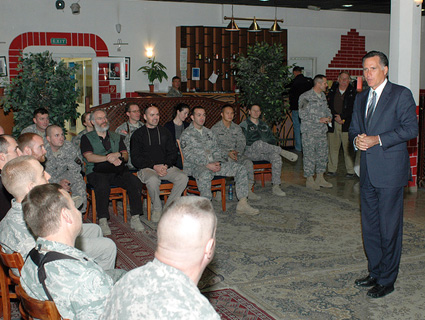 We're pretty sure this is a photo of Mitt Romney planning the raid that killed Osama bin Laden.<a href="http://www.flickr.com/photos/isafmedia/5338992830/">ISAFmedia</a>/Flickr

In what some (one guy on Twitter) have called “a stroke of comic genius,” Public Policy Polling decided to ask Ohio Republicans who they thought “deserved more credit for the killing of Osama bin Laden: Barack Obama or Mitt Romney. In what some (my colleague Tim Murphy) have called “the greatest thing ever,” a full 15 percent of Ohio Republicans surveyed said Romney deserved more credit than the president. Another 47 percent said they were “unsure.” This led to all sorts of funny quips on Twitter:

The secret’s out: Seal Team Six referred to Romney and his five sons.

This is amusing, but no one should take it particularly seriously. Significant percentages of Americans claim to believe all sorts of crazy things, and it’s possible that a large percentage of the people who told PPP that Romney deserves credit for the bin Laden raid simply wanted to say eff-you to the president.

The poll didn’t offer an option for “the Navy SEALs” or “the troops,” who undoubtedly would have blown out Romney and Obama if they were options. The news in this poll—as much as any one poll can be news—is that it found Obama leading Romney by five percentage points in Ohio. (The full poll results are here.) No Republican has ever won the presidency without winning Ohio. Here’s a reality check on the state of the presidential race: Nate Silver, the New York Times‘ polling guru, now gives the president a nearly 80 percent chance of winning reelection.