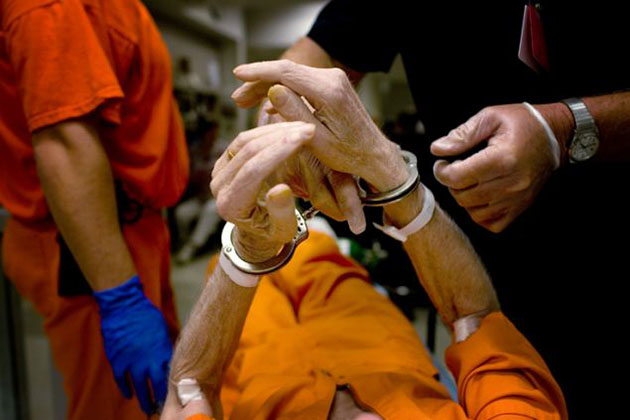 Albert Caroll, then 74, is admitted to the hospital for care beyond what the prison’s nursing unit can provide.  All photographs by Tim Gruber

LaGrange, Kentucky, July 9, 2008 — Words or images cannot capture what I felt today as I watched a old prisoner I’d gotten to know die right before my eyes. He was the second man I have seen pass away since I began shooting in the nursing/hospice unit of the Kentucky State Reformatory while my wife, filmmaker Jenn Ackermann, works on a documentary in the prison’s psychiatric unit.

Seeing these men die, just as one of the hospice workers had told me it would, simply makes your heart drop to the floor.

Some of these men did heinous things once, but I’m not here to judge them. As the warden said, they’ve already been judged.

A nurse stopped Jenn and I today as we were walking out and told us she hoped his death didn’t affect us too much. It did, Jenn said. It is our hope that the raw emotions we’re feeling will be ingrained in every photo and every bit of video footage we shot of this man—who despite our presence died alone.

I feel helpless today—nearly as helpless as some of the aging inmates I’ve come to know. Photographers often say that a camera creates a barrier between the shooter and the subject. That’s true. But it doesn’t shield you from the hopelessness you feel once you lower your camera. 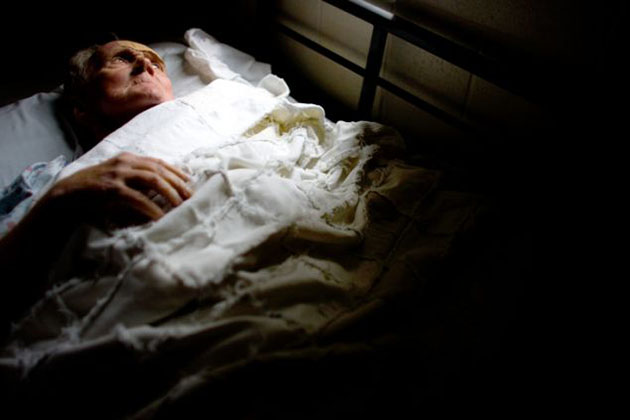 John Foote, then 69, in bed at the Kentucky State Reformatory. Foote fell out of bed after having a stroke. He had been in prison since 2003.

Some of the inmates have asked us how our projects will help them. I’m never sure how to respond. The best strategy, I’ve found, is to be as honest as I can. I learned early on that these men will remember every little thing you tell them. Their word is the only thing they’ve got in here, and so they hold everyone else to theirs. I can’t promise them that these photos will do anything help them.

I’m not even sure how to answer when they ask whether the project is helping me, at least. When I say I’m not getting paid for this work, they think I’m crazy. But that doesn’t matter much. After all, I’m working on a project I love with the person I love. Photography just happens to be a part of the process. I’ve gotten to the point where I want to work for only three people: myself, those I love, and my subjects.

I guess these are the emotions you wrestle with on a long-term project. Your heart gets involved. True, some of these men did heinous things once, but I’m not here to judge them. As the warden said, they’ve already been judged.

I did learn one thing today, though. Prison is no place to die. 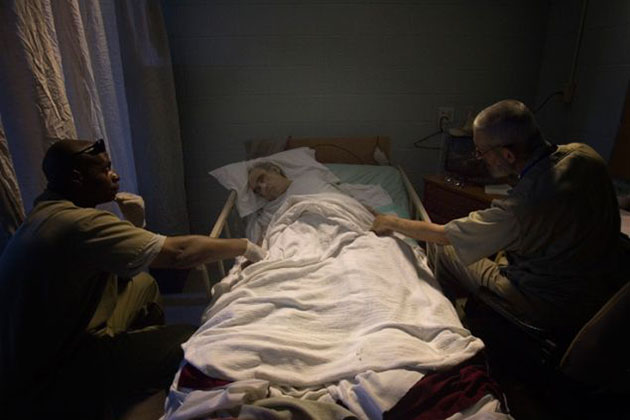 An elderly prisoner passes his final hours in the hospice unit. He died that same afternoon and was buried in the prison cemetery. 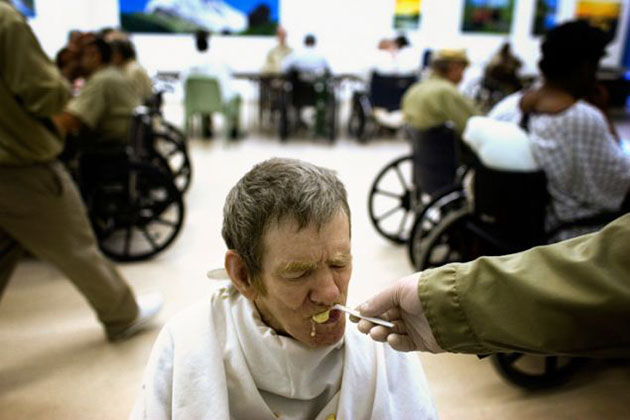 Charlie Coffey, then 65, is fed lunch at the Kentucky State Reformatory. He had been in prison for more than three decades. 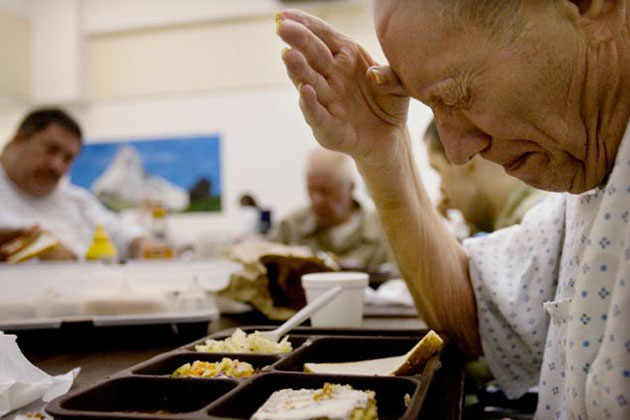 Charles Webb, then 74, shields his eyes from light. Webb had been losing his eyesight after 17 years in prison. 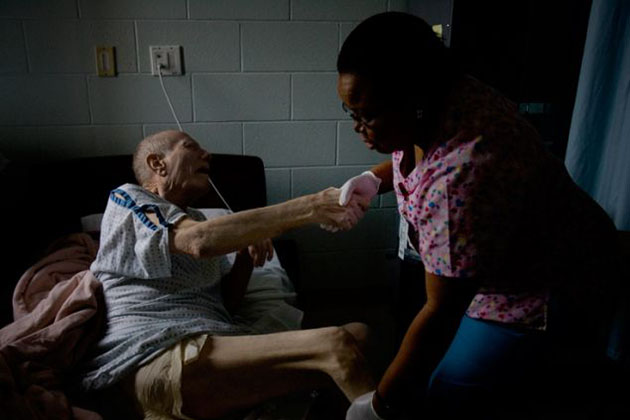 A prison nurse helps Charles Webb, then 74, into bed. 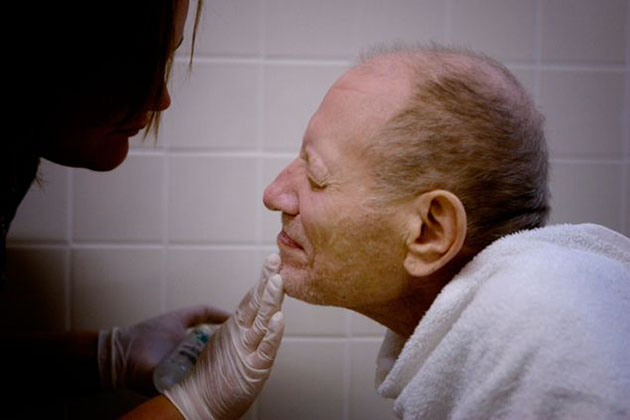 Charles Webb gets a shave from a prison nurse. 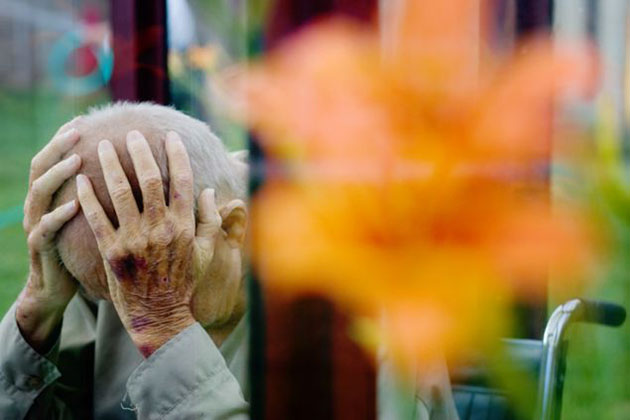 Shirley Goode, then 73, sits outside the nursing care unit. “This place is going to kill me. I’ll be lucky if I make it out of here alive,” he would repeat day after day. 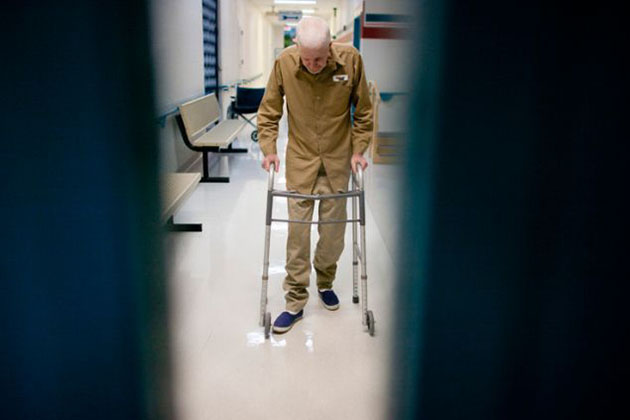 Albert Caroll, then 74, makes use of a walker during physical therapy at the Kentucky State Reformatory.

Read our companion piece, “The Other Death Sentence,” on the moral, practical, and financial implications of the more than 100,000 Americans now destined to spend their last days behind bars. And click here to see more of Tim Gruber’s photos and Jenn Ackermann’s films—including her Emmy-winning documentary.