Organizers of the 2012 Democratic National Convention were determined not to be outdone. “This roster of performances only adds to the excitement building in Charlotte for the historic week ahead of us,” Democratic convention chair Antonio Villaraigosa said. “[B]e ready for quite a show.”

Here’s your side-by-side comparison of the bands playing in Charlotte this week, and the ones that took the stage in Tampa last week.

1) A Tale of two taylors

Taylor Hicks: On the last night of the Republican National Convention, Hicks sang Michael McDonald’s 1976 hit “Takin’ It to the Streets.” The American Idol season 5 champion is famous for competently covering Stevie Wonder, being damned by TMZ‘s faint praise, and for his baffling, harmonica-laced cameo on Stephen Colbert’s cover of Rebecca Black’s signature song:

When asked about his performance by the Huffington Post, Hicks got bashful about his politics: “I don’t really talk about my party or political affiliations. I’m an entertainer; that’s what I was invited to do.” (His most political lyric is probably in “The Distance,” which goes, “[s]eems we’ve taken different sides, all caught up in politics and pride.” That is about as middle-of-the-road as it gets.)

James Taylor: Taylor, who grew up in Chapel Hill, North Carolina (roughly a 3-hour car ride from the site of the Democratic convention), arrived in Charlotte to entertain convention-goers on the final day. Taylor also wrote that song that has something to do with North Carolina. Along with marrying Carly Simon and guest-starring on The Simpsons space exploration episode, the singer-songwriter is known for being pretty hilarious in Judd Apatow’s Funny People:

James Taylor is a die-hard liberal; he played on the anti-Bush “Vote for Change” tour in 2004, along with Bruce Springsteen, Bonnie Raitt, and Pearl Jam. His pet causes include the environment, cancer research, and not destroying rainforests.

Kid Rock: Standing in for the indefinitely postponed Reagan hologram, Robert James Ritchie performed a 75-minute set outside the GOP convention site last Thursday. During the gig, he ad-libbed the following rap lyrics: “They say Obama is lyin’ / That’s why I’m voting for Romney and Ryan.” (Ironically enough, during the whole performance Rock was wearing a “Made in Detroit” t-shirt that wasn’t actually made in Detroit.)

Kid Rock is also famous for purportedly putting his marriage on the rocks by blowing up at his now ex-wife, Canadian actress/activist Pamela Anderson, over her cameo in Borat.

Mary J. Blige: The R&B singer is also scheudled to take the stage at the Time Warner Cable Arena on the last night of the Democratic gathering. Since last year, she’s been pulling for Obama’s reelection, telling CNN’s Piers Morgan that “I believe he’s capable of doing [great things]—of having another chance…He was given such a big pile of…And I think we have to ride and respect and support him, because that’s a lot.”

Also, she performed her cover of “Lean on Me” at President Obama’s 2009 inauguration:

Blige recently appeared as a virtuous, singing strip-club manager in the Rock of Ages adaptation.

Here’s Adkins on Real Time With Bill Maher, talking about how his “cows are still fucking”:

Jeff Bridges: The ever-abiding Dude entertained crowds in Charlotte ahead of the start of the Democratic convention. The Oscar-winner/part-time country singer came to town to promote the No Kid Hungry campaign, a cause he also promoted in Tampa in the spirit of bipartisanship. (For the record, he tends to lean left on political issues.)

Here he is at Carolinafest, singing “I Don’t Know,” from 2009’s Crazy Heart (in which Bridge’s played an old-school, washed up country star who has sex with Maggie Gyllenhaal): 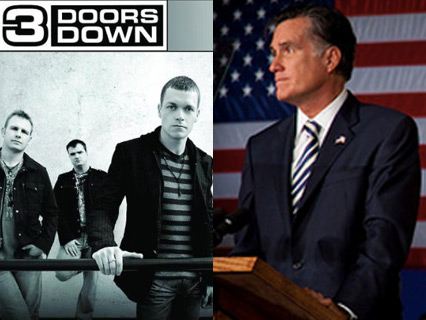 Foo Fighters: On Thursday afternoon, Dave Grohl and company performed their brand of Cheap-Trick-meets-Nirvana hard rock on the arena stage. Foo Fighters have performed in support of Obama before, and in February the president declared that he does indeed “love the Foo Fighters!“

Band leader Grohl is a devoted liberal, who was enraged when George W. Bush used two of his songs during the 2004 campaign. Watch the band perform an Obama fundraiser in Los Angeles:

Journey: The ’70s/’80s arena rockers (minus their signature lead singer Steve Perry) were in Tampa simply for the cash money. “It’s not an endorsement of any candidate and/or party—it’s just another private show,” a spokesperson for the band told Rolling Stone. The off-site fundraising event netted Journey half a million bucks. 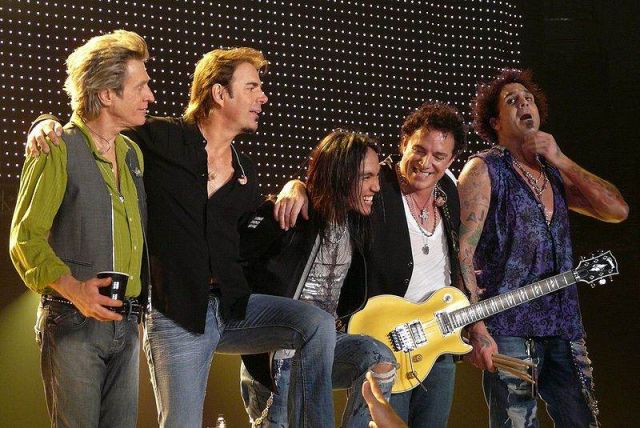 Earth, Wind & Fire: The soul/funk/disco veterans were set to open for Barack Obama on Thursday evening, before the final night of the convention was moved indoors to avoid anticipated rain. (A campaign official said that the band’s “physical footprint” couldn’t be accommodated at the smaller venue.) In the past, they’ve played the Obama White House, at the president’s first formal dinner. Following that performance in The White House’s East Room, Newsweek ran the headline “How Obama Made Earth, Wind & Fire Cool Again.”

Seven: They describe themselves as seven dudes who formed a group that produces “the best singing ever heard on stage and recordings.” Their background is primarily in opera and musical theater.

Here’s an example of that modesty:

Marc Anthony: The salsa/dance-pop Grammy winner has been big on the president for a while, having performed at a high-profile 2012 fundraiser, and starred in this Latinos for Obama video. (Due to his relationship with the president, Anthony has even been targeted by conservatives for his tax evasion.)