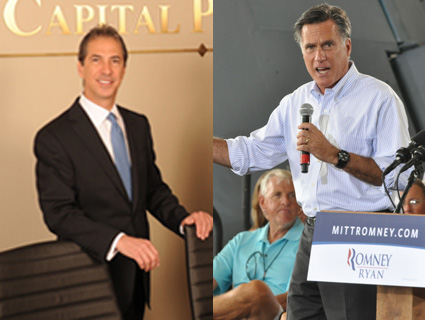 When Mitt Romney at a private fundraiser dismissed all Barack Obama voters as moochers and victims—showing disdain for nearly half of the American electorate—he was speaking at the home of controversial private equity manager Marc Leder in Boca Raton on May 17, 2012. (It was Romney’s second fundraising event in Boca that day.) This is evident from references made by Romney within the full video recording of the event that has been reviewed by Mother Jones.

When Mother Jones first disclosed secret video of Romney’s remarks, we were obliged to not reveal details regarding the time and place of the event. That restriction has been lifted, as the story has garnered attention throughout the media.

At the fundraiser, Romney was asked how he could win in November, and he replied:

There are 47 percent of the people who will vote for the president no matter what. All right, there are 47 percent who are with him, who are dependent upon government, who believe that they are victims, who believe the government has a responsibility to care for them, who believe that they are entitled to health care, to food, to housing, to you-name-it. That that’s an entitlement. And the government should give it to them. And they will vote for this president no matter what…These are people who pay no income tax…[M]y job is is not to worry about those people. I’ll never convince them they should take personal responsibility and care for their lives.

Romney made those remarks before donors who had paid $50,000 a plate to attend the dinner at Leder’s swanky house.

Leder has long been a fan of Romney. In January, the New York Times reported:

Years ago, a visit to Mr. Romney’s investment firm inspired Mr. Leder to get into private equity in the first place. Mr. Romney was an early investor in some of the deals done by Mr. Leder’s investment company, Sun Capital, which today oversees about $8 billion in equity.

The paper noted that Leder is something of a poster boy for private equity—and not in a good way:

Mr. Leder personifies the debates now swirling around this lucrative corner of finance. To his critics, he represents everything that’s wrong with this setup. In recent years, a large number of the companies that Sun Capital has acquired have run into serious trouble, eliminated jobs or both. Since 2008, some 25 of its companies—roughly one of every five it owns—have filed for bankruptcy. Among the losers was Friendly’s, the restaurant chain known for its Jim Dandy sundaes and Fribble shakes. (Sun Capital was accused by a federal agency of pushing Friendly’s into bankruptcy last year to avoid paying pensions to the chain’s employees; Sun disputes that contention.) Another company that sank into bankruptcy was Real Mex, owner of the Chevy’s restaurant chain. In that case, Mr. Leder lost money for his investors not once, but twice.

But Leder does differ from Romney in one significant fashion: how he likes to have a certain sort of fun. In August 2011, the New York Post reported,

It was as if the Playboy Mansion met the East EBond at a wild party at private-equity titan Marc Leder’s Bridgehampton estate, where guests cavorted nude in the pool and performed sex acts, scantily dressed Russians danced on platforms and men twirled lit torches to a booming techno beat. The divorced Sun Capital Partners honcho rented a sprawling beachfront mansion on Surf Side Road for $500,000 for the month of July. Leder’s weekly Friday and Saturday night parties have become the talk of the Hamptons—and he ended them in style last weekend with his wildest bash yet. Russell Simmons and ex-wife Kimora Lee attended a more subdued party thrown by Leder—who’s an event chair for Simmons’ Art For Life charity—on July 29 together. But the revelry hit a frenzied point the next day before midnight when a male guest described as a “chubby white meathead” and a “tanned” female guest stripped and hopped into the pool naked.

At Romney’s fundraiser at Leder’s Boca Raton home, not a single sex act was recorded.