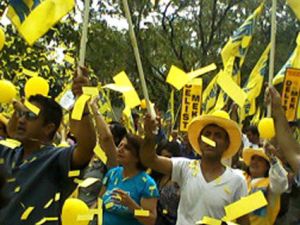 MEK supporters in front of the US State Department on August 26, 2011.Photo by Asawin Suebsaeng

After a few months of will-they-won’t-they tension, the US State Department decided on Friday to officially remove the Mujahideen-e-Khalq (MEK) from the Foreign Terrorist Organizations list, which the Iranian exile group has been on for the past 15 years.

Secretary of State Hillary Clinton is expected to notify Congress as early as Friday that she intends to take the [MEK]…off a State Department terror list, three senor administration officials told CNN…MEK was placed on the US terrorism list in 1997 because of the killing of six Americans in Iran in the 1970s and an attempted attack against the Iranian mission to the United Nations in 1992. However, since 2004, the United States has considered the residents of Camp Ashraf [in Iraq] “noncombatants” and “protected persons” under the Geneva Conventions. The group is in the final stages of moving from a refugee camp in Iraq where they’ve lived for more than 25 years is nearing completion under the auspices of the United Nations Assistance Mission for Iraq.

The Paris-based MEK—which enjoys a solidly low level of popular support among Iranians—is also called the The People’s Mujahideen of Iran, and was founded in Tehran in the mid-1960s as a synthesis of Islamic principle, left-wing populism, and violent resistance to the Shah. It has since been blasted by critics as a totalitarian, hero-worshipping cult with a history of engaging in indiscriminate mass murder (a particular sore spot is the allegation that MEK fighters acted as a death squad for Saddam Hussein during the 1991 Shiite and Kurdish uprisings in Iraq). Today, the group is reportedly on the frontlines of assassinating Iranian nuclear scientists, and has a long, bipartisan list of powerful friends in the US who pitch the group as the Western-friendly and pluralistic antidote to the Islamic republic.

As I reported last year, well-funded MEK backers also received a lobbying assist from high-powered international PR firm Brown Lloyd James—a company that has something of a reputation for sanitizing the records of dictators with names like Qaddafi and Assad. (Other clients have included AARP, the state of Qatar, the Washington embassy of Ecuador, Al Jazeera English, Russia Today, Forbes, and the famous composer Andrew Lloyd Webber.)