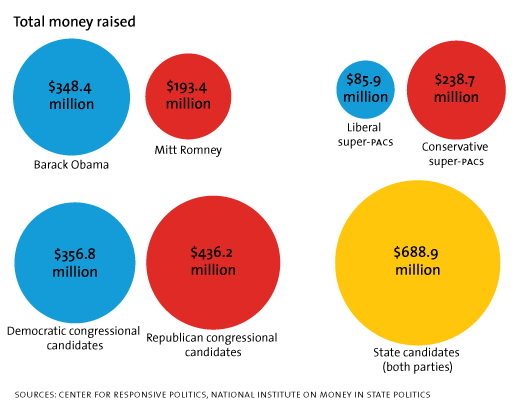 “At the Democratic convention, you can get a lot of work done just walking down the street.”
—Bill Burton, cofounder of the pro-Obama super-PAC Priorities USA Action, on wooing donors at the Democratic National Convention. Speaking on ABC, he warned liberal donors to “be very nervous” about outraising pro-Romney groups. That’s basically why Chicago mayor and former White House chief of staff Rahm Emanuel decided this week to step down from an honorary position with the Obama campaign to raise funds for Priorities.

The conservative super-PAC Campaign for American Values is out with a new ad attacking President Obama for supporting gay marriage. In a stilted conversation, a couple decides it won’t vote for Obama again because he lacks the values of Mitt Romney. Watch the ad below, and also take a look at these other comically bad anti-gay marriage ads.

$75,000: The amount spent by the dark-money Republican Jewish Coalition on an attack ad in the Charlotte Observer ahead of Obama’s speech Thursday night at the DNC. The ad, which is slated to run next week in four swing-state Jewish newspapers, hits Democrats for omitting in their 2012 platform the pro-Israel rhetoric they included in 2008. Reportedly at Obama’s request, language recognizing Jerusalem as the capitol of Israel was reintroduced to the platform in a convention floor voice vote, a contentious move that may have violated party bylaws.

The election’s 10 weeks away, but spending from outside groups has already eclipsed the $301.6 million spent in 2008. They’ve spent at least $306.2 million so far this election, but as the Center for Responsive Politics notes, that’s a conservative estimate. 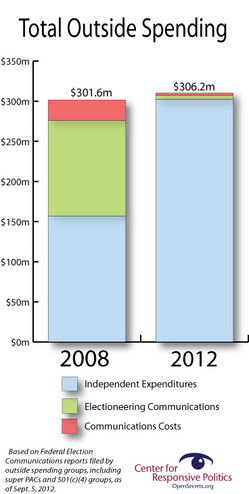 • How Nonprofits Spend Millions on Elections and Call It Public Welfare: It’s spending by nonprofits, not super-PACs, that may sway this election.
• Americans for Prosperity Chief: We Don’t Know If $27 Million in Anti-Obama Ads Has Any Effect: The president of AFP, the conservative group founded by David Koch, also cast doubt on future politically charged ad blitzes.
• Karl Rove Jokes About Murdering Rep. Todd Akin: Rove’s Crossroads groups intend to spend $200 million to boot Obama out of the White House.

• Did a Republican appeals court just make Citizens United even worse? ThinkProgress
• Democrats work behind the scenes at the DNC to compete with the GOP’s fundraising advantage. Washington Post
• Democratic strategist Paul Begala rails against super-PACs, while asking donors to give to one supporting Obama. Center for Public Integrity
• 501(c) groups are set to disregard a federal court’s order that they disclose donors by today. Reuters