Earlier this week, the New York Times‘ Nate Silver wrote about the gaping “gender gap” at the heart of the presidential race, specifically the degree to which women are breaking for Barack Obama and men are breaking for Mitt Romney. On average, polls show Obama beating Romney by 9 points with women, while Romney has a 9-point advantage with men. All in all, that’s an 18-point gender gap, a powerful indicator of just how much each candidate’s chance of victory depends on one sex or the other.

(Update: Does a new AP poll mean the gender gap is gone? Not so fast.)

The red-blue gender gap has grown during the past two decades, but women and men’s presidential preferences have often diverged. According to historical Gallup survey data, in 1952, women supported Republican Dwight Eisenhower by more than 5 points over men; likewise, men broke toward Democrat Adlai Stevenson by 5 points. (Total gender gap: 10 points.) By the ’80s, women supported Democratic candidates much more solidly than men. In the 2008 election, 57 percent of women voted for Obama, compared with 50 percent of men; 50 percent of men voted for John McCain, while 43 percent of women did. (Total gender gap: 14 points.) 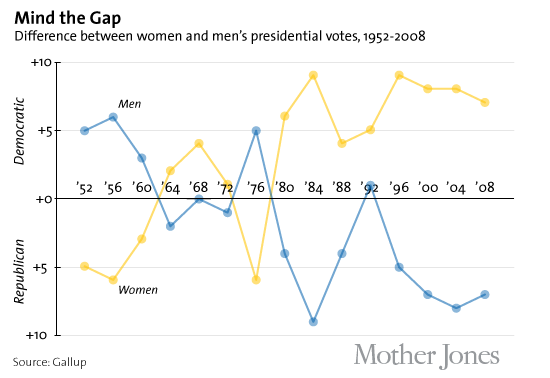 In short, women have been increasingly backing Democrats by the binderful. Nearly 30 years of exit-poll data tells the story: 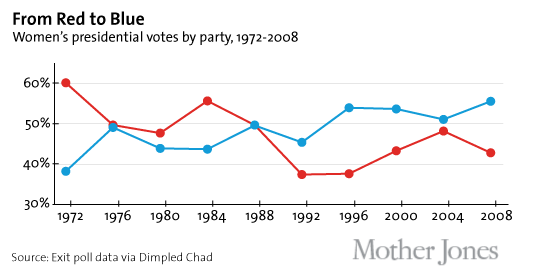 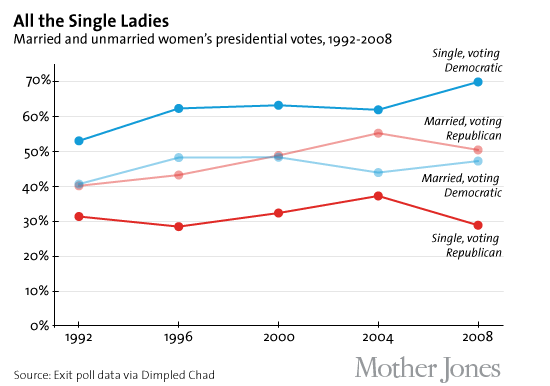 The gender gap helps explain why this year’s race is so tight. A slice of recent swing-state polling by Public Policy Polling shows that it’s very pronounced in key battleground states, including Ohio, Florida, Wisconsin, Virginia, and Iowa. (And that’s just one pollster’s results.) 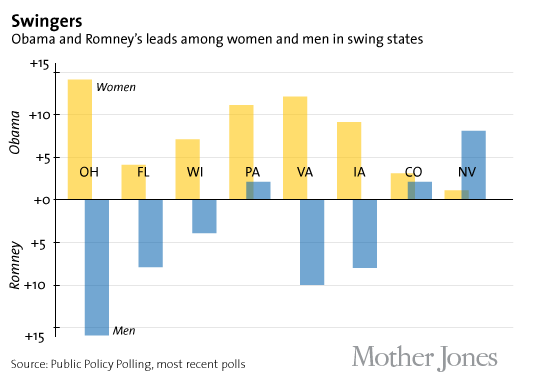 So why are more women flocking to Democratic presidential candidates (and fleeing Republicans)? The answer doesn’t seem too complicated, what with stuff like this, this, and this. A recent Gallup poll in 12 swing states found that more than half of female voters said that abortion or equal opportunity were their top election priority—issues that the president’s campaign has repeatedly hammered Romney, Paul Ryan, and Republicans on.

Update, 10/25: According to a just-released AP poll, Romney has erased his 16-point disadvantage with women and his lead with men has shrunk to 5 points. However, this is is just one poll; it will be interesting to see if other nationwide tracking polls show similar shifts in the week ahead. As Nate Silver’s post explained, nine major polls show a significant gender gap; the 18-point split he cited was an average of those. It didn’t include AP. If you factor in the new AP poll, Obama has an average 8.5-point advantage with women; Romney’s average advantage with men is 8.7 points.