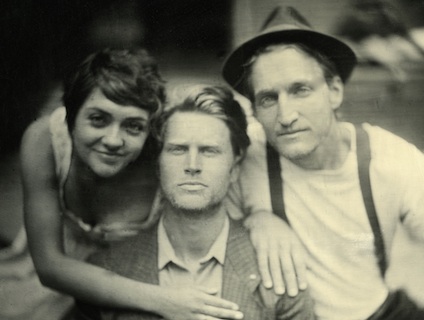 On the right, The Lumineers' Jeremiah Fraites.Mark Sink

The scene preceeding The Lumineers’ early afternoon set at San Francisco’s Hardly Strictly Bluegrass Festival was just about as competitive as that portrayed in local news coverage of shoppers streaming into Walmart on Black Friday. Attendants barked at twenty-somethings ducking ropes in pursuit of a view, the grass section in front of the stage held about one fan per square foot, and the aisle up through the middle of the meadow transformed into a slow-moving mosh pit. It wasn’t even 3 p.m. I slinked through the crowd and miraculously landed an edge of someone’s tarp.

Jeremiah Fraites, the Denver-based folk band’s drummer, remembers the afternoon in much the same way: “When we actually took the stage, every single vantage point, every spot where a human being could be, there was one—surrounding us.” The entire Eucalyptus-shaded hill behind the stage was covered with humanity, as were the bushes flanking the sides of the small outdoor arena. I spotted two shirtless dudes draped over tree branches, ready to soak it in. “It made us feel pretty damn good about that being our first time at Hardly Strictly,” Fraites told me a few days after the performance.

Why all the fuss? The Lumineers started with two Jersey boys, Fraites and frontman Wesley Schultz, heading West in search of a new setting. They plucked classically trained cellist Neyla Pekarek from a Craigslist ad. (She’s credited in the band’s bio for softening “Wes and Jer’s rough edges.”) And though the group grew popular in Denver, frequenting open-mic nights at the Meadowlark club, it was mostly unheard of nationally—until this year, when the wild success of their song “Ho Hey” put this rootsy, bright-eyed trio on the map.

“Ho Hey” first made waves after appearing on Hart of Dixie‘s season finale last December, and the tune has since climbed its way up to being named the most shared song on Spotify in Manhattan this October. It has become an anthem for souls lost, confused, but somehow optimistic: I dunno where I belong/ I dunno where I went wrong/ but I can write a song, Schultz sings in the second verse. The tune has spent 20 weeks on the Billboard’s Top 40 chart, which hasn’t hurt the band’s recent tours—almost every national and international appearance as of late has sold out. Radio stations, what Fraites deems “the missing link” to the band’s launch to fame, gave the number lot of love through the summer. I prodded Fraites to divulge more about the song’s provenance.

It was written back when Fraites resided in New Jersey and Schultz called Brooklyn home and “times weren’t really that great. We were just trying to make ends meet and imagine a better life for ourselves.” When they started playing “Ho Hey” in Denver, Fraites remembers, “that song really represented us with our backs against the wall.” Fans seemed to identify with it, and the song became a secret weapon. “That was a really good song to get in people’s faces and scream ‘Ho’ and ‘Hey’ at them,” Fraites says, “I don’t think I’ll ever get sick of that song for that reason.”

Let’s face it: “Ho Hey” is this year’s “Home“—that hand-clapping folk anthem from Edward Sharpe and the Magnetic Zeros. Does its popularity mean The Lumineers have staying power? The energetic performance at Hardly Strictly served as proof of the band’s ease with the front-porch folk genre and their ability to spin out popular tracks harnassing the hope of the underdog. Now they’re gearing up for a European tour with the Civil Wars and a dream-come-true opportunity starting in December: opening for one of Schultz’s idols, the Dave Matthews Band.

As they played live in Golden Gate Park, though, the trio often struck me as young and inexperienced. At one point Fraites, wearing black suspenders and a crisp white shirt, tripped over the mic stand and twirled back to keep himself from falling, smiling sheepishly while trying to continue. Yet they also conveyed passion and yearning and sung with their whole bodies, making it hard to look away. Though sardined and sweaty in the Golden Gate Park sunshine, audience members held their arms in the air for much of the performance. When the set was over, I heard people near me humming “Ho Hey” as they elbowed their way out of the packed grove. Staying power, who knows, but the song is certainly sticking pretty hard for the time being.