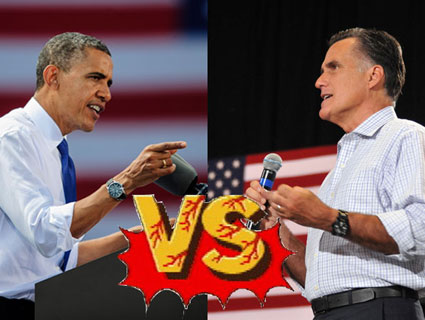 On November 6, the fate of the free world will be decided by a handful of voters in Iowa, Virginia, Ohio, and Colorado, many of whom will have made up their minds at the last minute after a frantic bout of Googling (“Mitt Romney” + “Gangnam style”). If all goes as planned, the losing candidate will call to graciously congratulate the winning candidate sometime before the East Coast has gone to bed, the losing party will begrudgingly accept the result, and the transfer of power will continue in peace, as it has without exception every four years since 1860.

Probably. But there’s another possible outcome: Instead of a smooth transition, the nation could be thrown into a constitutional crisis, or at the very least, a few more weeks of waiting. Here’s a look at what could happen, in no particular order of probability:

Unpopularly elected: President Obama wins the Electoral College by the narrowest of margins—but loses the popular vote to Mitt Romney. That could trigger a coordinated challenge to the legitimacy of the election. As CBS News’ Scott Conroy notes, “In the days before the 2000 election, George W. Bush’s campaign reportedly prepared talking points to dispute the democratic fairness of what was then seen as a more likely outcome—that Al Gore would win the Electoral College while losing the popular vote.” (When the opposite scenario unfolded, Gore pushed wary Democrats to accept the outcome.) The New York Times‘ Nate Silver projects that there is a 5.2 percent chance of Obama winning the Electoral College while losing the popular vote—and a 2 percent chance of the reverse.

Romney-Biden: Barack Obama wins the popular vote on November 6, winning every state John Kerry did in 2004, plus Iowa and Virginia, getting him every state he needs to clinch the election. But there’s a catch: Romney pulls off an upset in Maine’s second congressional district, the state’s most conservative (Todd Palin campaigned there in 2008). Maine is one of two states to split its electoral votes, and the victory would put Romney and Obama in a 269-269 Electoral College tie.

Or: Obama loses every swing state but Ohio.

Or: Obama wins Virginia, Colorado, Nevada, and New Hampshire. But he loses two blue states—Wisconsin and Iowa—along with Florida and Ohio.

The presidential tie then goes to the Republican House of Representatives. (Silver’s model gives this an 0.3 percent chance of happening.) Each state delegation gets one vote. Romney wins easily.

But it’s not that simple. In the event of an Electoral College tie, the Constitution stipulates that the vice president be chosen by the Senate—which is in Democratic hands until at least January. Even if a few Democrats peel off (we’re looking at you, Joe Manchin), a 50-50 tie would be settled by the vice president. Voting for yourself to be second-in-command to your ideological opposite? Sounds like the ultimate Biden move.

President Boehner: Thanks to a combination of lame-duck congressmen and turncoats, the House ends up in a 25–25 tie, making Speaker of the House John Boehner (R-Ohio) president. He immediately breaks into tears.

Nader 2.0: Democrats fall flat on November 6. Romney wins the big three—Florida, Virginia, and Ohio—plus Iowa, and Obama falls below the 50 percent mark in Colorado and Nevada. But aided by disaffected Ron Paul supporters who feel they’ve been pushed around by the GOP one too many times (and a marijuana referendum in Colorado), Libertarian Gary Johnson has one of the best performances in his party’s short history, taking in 4 percent of the vote in both states. It’s enough—barely—to put Obama over the top.

Recount! With visions of hanging chads still fresh in everyone’s heads, the presidency once more comes down to one or two pivotal states. On November 7, it’s still too close to call. Likely candidates include Iowa, whose GOP caucus last January was marred by vote-counting troubles, or—perish the thought—Florida. In Colorado and Ohio, a recount is automatically triggered if the difference between the two candidates is half of 1 percent or smaller. In Virginia, a recount can be requested if the margin between the two candidates is less than 1 percent of the non-write-in vote. Minnesota Sen. Al Franken wasn’t seated until July of 2009, after an eight-month legal battle and recount process.

Going rogue: In September, the Associated Press reported that at least three Republican electors were considering not voting for Mitt Romney in the Electoral College should he win their state in November. (A fourth resigned his position in protest.) In a close race, those three votes—which would likely go to Ron Paul—could make all the difference. They could also lead to messy legal action, since Nevada, home to one of the potentially wayward electors, requires electors to abide by the popular vote result.

November surprise: Biblical prophesy guru and Michele Bachmann confidante Jan Markell has warned that this election would have “apocalyptic” consequences. And she was right. As the nation awaits the returns on election night, President Obama reveals that he is really one of the therion, a seven-headed, 10-horned sea beast prophesied in the Book of Revelation. The world immediately plunges into war, ending, after many years of violent upheaval, with the therion being thrown into the Lake of Fire. Interestingly, the Constitution makes no provisions for this kind of scenario, although presumably it will end with Virgil Goode seizing power.