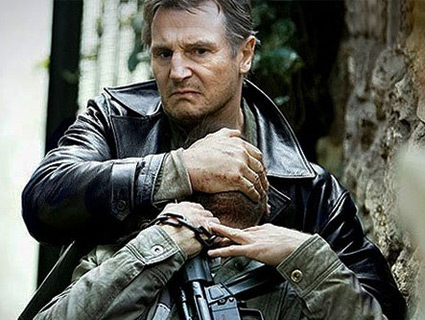 Taken 2 is an unqualified dud, and it has taken two hours of my life that I will never get back. Despite being the sequel to 2008’s Taken (which is forever awesome) and starring the elder statesman of ass-kicking Liam Neeson, this entry into the series is nothing to be taken seriously.

In the first film, Kim Mills (Maggie Grace), daughter of good-natured CIA torturer Bryan (Liam Neeson and Liam Neeson’s stunt double) was taken by human-trafficking Albanians and chauvinist Arabs. He eventually un-takens her, using his very particular set of skills; namely the ability to massacre ethnic caricatures at will. In the second film, the families of the slaughtered Albanian stereotypes have taken it upon themselves to plot brutal vengeance. And so Bryan and ex-wife Lenore (Famke Janssen) get taken, too, in Taken 2.

I was taken aback by the conspicuous sparseness of the action; the set pieces that do crop up are lazily staged and disjointed. All of the actors seem listless and detached, like many scenes were shot during coffee breaks taken during other, better movies. (Also, in Taken 2, Bryan and Kim at one point attack an American embassy, which may seem somewhat tone-deaf to viewers who have been watching the news lately.)

Taken together, the movie is an hour-and-a-half stretch of anti-climax. If you haven’t taken two Provigil right before walking into that dark theater to see Taken 2, you risk slipping into a spout of narcolepsy. Do not allow yourself to get taken to Taken 2.

Never again will I take the original for granted.

Take a look at the international trailer for part deux, regardless:

** To take a serious tack for a minute: If box office returns are good enough to warrant another installment, what would it be called?

Unless the studio hires a champ like William Friedkin to take over and make the series wonderful again, I have zero interest in finding out.

Taken 2 gets a wide release on Friday, October 5. The film is rated PG-13 for generic Takening. Click here for local showtimes and tickets.