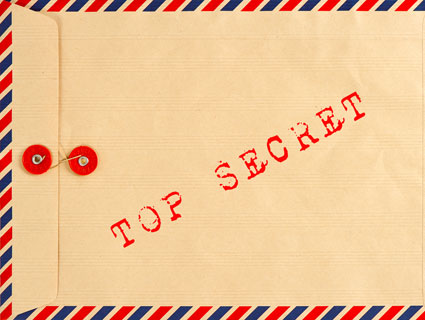 On Monday, as Hurricane Sandy shut down most of the rest of the federal government, the black-robed justices of the Supreme Court gathered to hear a case that embodies the post-9/11 paradox: Can the government violate your rights as long as it does so in secret?

In 2008, Congress, with the support of then-Sen. Barack Obama, passed a bill called the FISA Amendments Act that retroactively legalized the Bush administration’s warrantless spying program. Ever since, a coalition of civil libertarians and human rights activists—including Amnesty International, the American Civil Liberties Union, attorneys for Guantanamo Bay detainees, and journalists—have been seeking to challenge the program as unconstitutional.

Unfortunately for these plaintiffs, they have so far been unable to challenge the FISA Amendments Act directly because the government says that they can’t prove the government has actually spied on them. Now the Supreme Court has to decide who’s right.

“If you buy the government’s argument, this statute will never be tested in a public court,” says Alex Abdo, an attorney with the ACLU, which is representing the plaintiffs in the case, Amnesty v. Clapper. “No one would be able to challenge the statute, because no one would be able to prove their communications were intercepted, precisely because the government refuses to disclose whose communications it picks up.”

Here’s what the civil libertarians and human rights activists are upset about: The FISA Amendments Act authorized the warrantless surveillance aimed at targets abroad, including correspondence where one of the points of contact is within the United States. That means the government could spy on American citizens without a warrant or probable cause. Surveillance in cases targeting suspected foreign agents previously had to be approved by a special court. The FISA Amendments Act allowed the government broad latitude to spy without ever needing to ask a judge’s permission, even if that means picking up Americans’ emails and phone calls.

The arguments before the Supreme Court on Monday weren’t about whether this kind of surveillance violates Americans’ constitutional rights. Instead, the justices are deciding whether or not the lawyers, journalists, and human rights activists involved in the case can sue at all. To move forward with their case, the plaintiffs need to prove they have what lawyers call “standing”—they have to prove that the law will affect them. That’s hard because whom the government spies on is by definition a secret.

Obviously the ultimate question of whether or not the government’s behavior is constitutional is important. But just as important is the question of whether the plaintiffs can argue before a court that the government’s behavior is unconstitutional. Until now, “it’s a secret” has been an easy way to avoid even discussing the expansive powers of the post-9/11 security state in court. Americans on a “kill list”? It’s a secret. Sending people to other countries to be tortured? It’s a secret. Listening to Americans’ phone calls? It’s a secret.

The plaintiffs argue the harm caused by the assumption they could be spied on are very real. Among the plaintiffs are lawyers for Gitmo detainees (including one defending accused 9/11 plotter Khalid Sheikh Mohammed), journalists, and human rights activists who say they’ve gone so far as to travel overseas in order to avoid their communications being intercepted. Moreover, they argue, the fact that the government has this authority in the first place has an impact on what people say, because they have to assume the government is listening. We say, act, and even think differently when we know we’re being watched.

The government’s response? You people are just paranoid. Those lengthy trips abroad to avoid government eavesdropping, the government argues, are just “self-inflicted injuries” based on “speculative beliefs and fears” about being spied on. But if the plaintiffs were actually spied on, they wouldn’t know. Because it’s a secret.

Some of the justices seemed skeptical of the government’s argument that efforts to avoid surveillance were “self-inflicted” burdens, however. Justice Anthony Kennedy, who in the past has been a key swing vote on war on terror cases, said attorneys for suspected terrorists would be guilty of “malpractice” if they talked on the phone with their client with this statute in place. It’s often hard to know where the justices stand based on oral arguments—but they seemed at least somewhat sympathetic to the ACLU’s argument that the law made life more difficult for the plaintiffs. “The court was able to appreciate the dilemma that this statute puts our clients in,” Abdo says.

Even if the Supreme Court decides the plaintiffs have standing to sue, that doesn’t indicate who will end up winning the case. The current composition of the court isn’t exactly friendly to civil liberties in the war on terror—Bush’s appointees shifted the court to the right on these issues, and the legal views of Barack Obama’s recent appointees have yet to be tested. Solicitor General Donald B. Verrilli Jr. suggested that if it came to that, they could just fall back on an old argument.

“Wouldn’t the government then say as far as the merits of the complaint, this information is classified, is a state secret, we can’t—we can’t go forward with the litigation?” Justice Ruth Bader Ginsburg asked. “That is a possibility,” Verrilli replied.

In other words, even if the government loses this argument before the Supreme Court, it still has a way to win the case on the merits: Just say it’s a secret.