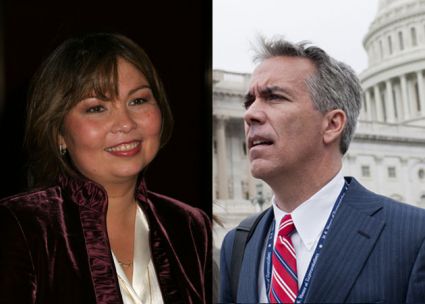 Foes of America’s big-money politics often warn that cash-flush super-PACs and dark-money nonprofits are trying to “buy our elections.” In reality, that’s all but impossible at the presidential level. The Obama-Romney race is expected to cost $2.5 billion, which means no single group can dream of buying it. But move down the ballot and you’ll find that, in a competitive House race, a million dollars can make a major impact. It may even decide the race.

That appears to be the goal of a secretive super-PAC named Now or Never. In recent weeks, it has spent $1.7 million in Illinois’ 8th congressional district in support of Rep. Joe Walsh (R-Ill.) and against his challenger, Democrat Tammy Duckworth. Now or Never has so far spent twice as much as the tea-party-backed Walsh, and more than Duckworth, an Iraq War veteran with strong grassroots support. Now or Never has spent three times more than every other outside group in the race, according to the Center for Responsive Politics.

Walsh lags in the polls and makes headlines almost weekly for the bile he spews on the stump. The smartest political pundits have written him off. Can Now or Never save him? Or is it delusional for trying?

Now or Never’s involvement in Walsh’s race is a curious choice given the steep odds he faces. He won his 2010 race by just 0.15 percent of the vote, and he’s now running in a redrawn congressional district with a built-in seven-point Democratic advantage. Walsh’s string of controversial comments haven’t helped. A sampling: Mitt Romney’s “47 percent” comments were right; Democrats “want Hispanics to be dependent upon government just like they got African Americans dependent upon government”; President Obama is dumb and a “tyrant”; and Duckworth, a veteran who lost her legs in a helicopter crash, talks too much about her service—unlike “true heroes.”

On September 17, Now or Never made its first investment in the race—a staggering $810,150 media buy to support Walsh, the biggest single investment in the race up to that point. Days later, a survey released by the left-leaning Public Policy Polling showed Duckworth ahead by 14 percentage points. It followed up its initial ad buy with another $936,318 of TV ads and direct mail backing Walsh and bashing Duckworth between September 20 and October 3.

The RealClearPolitics website, Washington political guru Charlie Cook, and numerous other pundits still predict a Duckworth victory in November. Yet it’s not unheard of for a super-PAC to play a decisive role in a House campaign. In 2010, Rep. Dan Maffei (D-N.Y.) led Republican Ann Marie Buerkle by 12 points with two weeks till Election Day. Then Karl Rove’s American Crossroads super-PAC spent more than $400,000 on ads bashing Maffei. Lifted by Crossroads, Buerkle surged in the polls and ended up winning—by 648 votes.

“Just like some lottery winners have no idea what to do with their money, some delusional super-PACs have no sense of political strategy or viability.”

Now or Never is cloaked in secrecy. Spokesman Tyler Harber refuses to identify the people who run the group; he says only that they’re “a group of business owners and political operatives who have worked in Washington, DC, and across the Midwest.” Now or Never has no office, listing only the name and address of its attorney, James Thomas of Kansas City, Missouri, on its federal filings. Reached at his office, he said he’s a “very politically active person” but doesn’t have “authority to speak on behalf” of the super-PAC.

Now or Never first arrived on the scene this summer as a player in Missouri’s Republican Senate primary. In a two-week span, it dumped nearly $700,000 into advertisements supporting former state treasurer Sarah Steelman, a tea party favorite endorsed by Sarah Palin. When it wasn’t boosting Steelman, Now or Never hammered one of her opponents, businessman John Brunner.

Brunner led the Missouri primary field with 33 percent of Missourians’ support, according to a statewide poll released at the time Now or Never appeared. Steelman had 27 percent, and in distant third was Rep. Todd Akin (R-Mo.) with 17 percent. But the super-PAC didn’t appear to help Steelman one iota: She finished last in the primary while Akin surged to grab a narrow, surprising victory. (Akin, of course, immediately torpedoed his campaign by claiming that victims of “legitimate rape” don’t get pregnant.)

Another mystery is who’s bankrolling Now or Never’s foray into the Walsh-Duckworth race. Because the super-PAC discloses its donors on a quarterly basis, the last contribution reported by Now or Never is a July 11 check for $7,500 from Capital Health Management in Columbia, Missouri. In fact, every donation disclosed by Now or Never to date has come from Missouri, including $250,000 from Missouri businessman Stan Herzog, $100,000 from businessman and philanthropist Rex Sinquefield, and $50,000 from Maxine Steelman, the mother-in-law of Sarah Steelman.

All the donations reported by Now or Never add up to only $484,000. Now or Never’s Illinois spending is three and a half times what it has disclosed in contributions. (Harber says Now or Never will file its next disclosure documents around mid-October.)

An aide to Duckworth notes that she offered to sign a pledge with Walsh discouraging any super-PAC spending in their race. The pact was modeled after Democrat Elizabeth Warren and Republican Sen. Scott Brown’s pact in Massachusetts to keep outside spending out of their race. Walsh, who supports the Supreme Court’s Citizens United decision, declined.

David Wasserman, an expert on congressional races and the House editor of the non-partisan Cook Political Report, says Now or Never’s support for Walsh is the most glaring example of a super-PAC wasting money on a race it can’t dream of flipping. Wasserman says he’d be surprised if Walsh claimed 45 percent of the vote in November. “Just like some lottery winners have no idea what to do with their money, some delusional super-PACs have no sense of political strategy or viability,” Wasserman says. “Joe Walsh simply is not competitive in his reelection bid against Duckworth in a redrawn district.”

Yet Harber, the Now or Never spokesman, says the super-PAC is confident it can swing the Walsh-Duckworth race. The group’s internal research “allows us to ‘war game’ races to determine where we can have the greatest effect.” That research, he says, showed that Now or Never “can turn the tables” in Walsh’s favor.