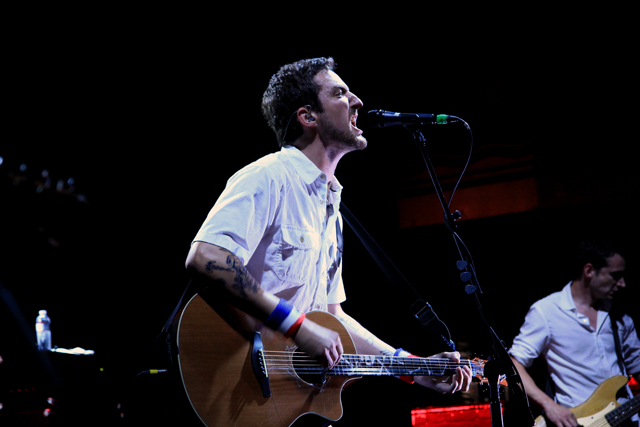 Greg Walker was sweating bullets. As the longtime tour bus driver for Frank Turner & The Sleeping Souls, he’d survived his fair share of long nights and rock and roll hijinks. But he’d never been onstage. Tonight that would change: Turner had asked his trusted chaffeur to jump in on harmonica for the final number. “And that’s the problem,” Walker told me on Saturday night, as he nervously lit another cigarette outside New York City’s Webster Hall. “I don’t play harmonica.”

He needn’t have worried. Walker’s debut was a smashing success; he huffed and puffed with great aplomb. Not that it mattered much. For Turner, the technical execution of the harmonica solo was far less important than the chance to lodge a stick of dynamite into the wall that separates artistes from their blue-collar crews and rockstar from audience member. You see, Turner doesn’t care much for walls. Since the launch of his solo career in 2006, the 30-year-old British punk-rocker-turned-folk-rocker has built many of his songs around themes of radical inclusivity: He writes songs about the value of friendship, about uniting the unruly rabble, about pacifying class warfare, and about the importance of not simply being a spectator in life. If he’s going to play music in front of hundreds of New Yorkers, why shouldn’t the bus driver? 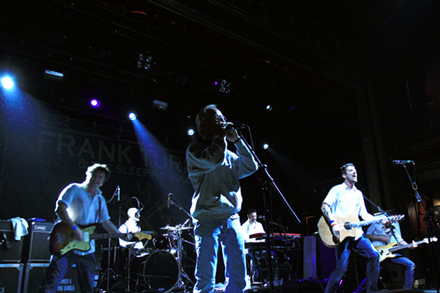 Bus driver Greg Walker on the harmonica. Tim McDonnell/Mother JonesThe full depth of Turner’s songbook was on display Saturday, in the first of two NYC shows capping off a US tour in advance of his newest release, Last Minutes & Lost Evenings, a “hand-picked” CD+DVD compilation of his last six years’ choicest tunes. If Turner is new to you, Last Minutes… (out this week) is a bangup place to start, consisting of the backbone of the Turner canon to date. The songs deal plainly with the triumphs and tribulations of urban life as a young adult: loneliness and the euphoria of reversing it, helping friends who go off the rails, confronting fears of aging and wasted time, and, of course, learning how to fight off a raging hangover and find the right bus on Sunday morning after you’ve crashed in some completely foreign part of town. 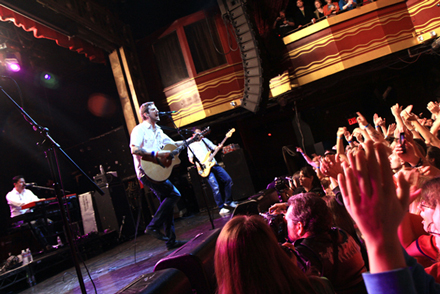 One of the best tracks on the record (and live) is “Long Live the Queen,” a true story about a friend who is losing a battle with terminal illness and who convinces Turner to bust her out of the hospital for one final drunken hurrah in the streets of London. Behind me in the audience, a pale, emaciated woman with close-shaved pate sobbed and sang along. Indeed, the audience knew at least as many of the song lyrics as Turner did—and in some cases more.

Yes, Turner sings, life sometimes blows. Sometimes broken hearts and disillusionment are manifest in ways that are the more miserable for their mundanity: “I was longing for a shower, some clean sheets / And a charger for my phone.” But who hasn’t been there? The important thing is to remember that the problems we face privately are universal, that you aren’t the only one to have sighed into the bottom of a pint glass, and that if any one of us is going to make it, we’re going to all have to make it together.

On Saturday night, no one put it better than Turner himself: “The whole point of what we’re doing here,” he told the adoring crowd, “is to take a roomful of strangers and turn them into friends.”

Click here for our profile of Frank Turner, here for a review of his last album, England Take My Bones, and here for all of our music coverage.