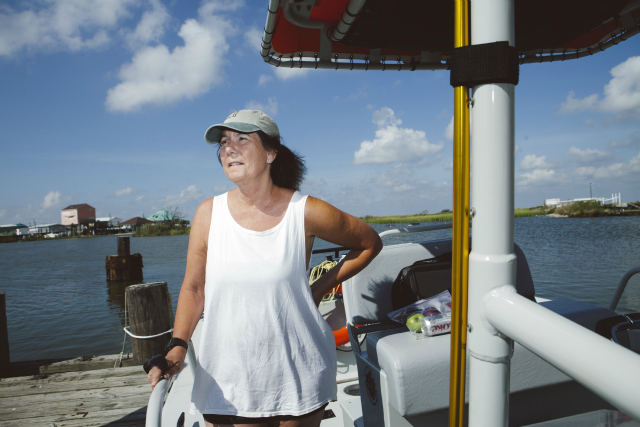 Nancy Rabalais: Courtesy of the John D. & Catherine T. MacArthur Foundation.I was very happy to hear that one of this year’s MacArthur’s Fellows is Nancy Rabalais, executive director and professor at the Louisiana Universities Marine Consortium (LUMCON). I profiled Nancy’s work in my MoJo cover story “The Fate of the Ocean” after her research facility in Chauvin, Louisiana, had been hammered by Hurricanes Katrina and Rita, and again in my MoJo piece “The BP Cover-Up” when her facility was slammed by an oil spill and oil-dispersant catastrophe, and this year in my profile of Keystone Ladies in science and conservation. I’ve also blogged regular updates on her pioneering work on dead zones and on her receipt of a prestigious Heinz Award last year.  I honestly can’t think of anyone more deserving of a MacArthur Fellowship in light of her constant efforts against the odds in the near-war zone of the Gulf of Mexico.

Here’s what the MacArthur Foundation has to say about her career so far:

Nancy Rabalais is a marine ecologist who is dedicated to documenting and mitigating the effects of hypoxic zones—aquatic areas with low dissolved oxygen levels commonly known as “dead zones—that have expanded dramatically in the Gulf of Mexico and many other coastal systems around the globe. Since the mid-1980s, she has led a long-term monitoring program to study the size, intensity, and seasonal occurrence of dead zones in the waters off the Louisiana continental shelf; she has also analyzed the relationship between the extent of hypoxia and the increasing quantities of nutrients such as nitrogen and phosphorus flowing into the Gulf from the Mississippi River watershed. When concentrated in coastal waters, the nutrients from farmland fertilizer and other sources spur the growth of an overabundance of algae, the decomposition of which consumes oxygen vital to sustaining an enormous spectrum of aquatic species. Over the past three decades, Rabalais’s studies have evolved to include collaborations with researchers from many different disciplines and have used methods from physical oceanography, hydrology, geochemistry, and paleoecology to make ever more precise assessments of hypoxia dynamics and their impact on a range of fragile, interconnected ecosystems. In addition to her scientific contributions, Rabalais has played a prominent role in informing strategies to restore the degraded waters of the Gulf by reducing nutrient pollution from urban and agricultural runoff upstream and has focused national attention on the environmental and economic consequences of large-scale eutrophication. Her outreach efforts have included lecturing throughout the United States about the effects of hypoxia on those far from its waters, testifying before Congress, and working with federal, state, and tribal agencies on an action plan for improving water quality in the Mississippi River basin. While weathering the destruction of her research facility in catastrophic hurricanes and treacherous diving conditions due to oil spills, Rabalais continues to deepen our understanding of this profound oceanographic problem that threatens the well-being of the entire Gulf region.