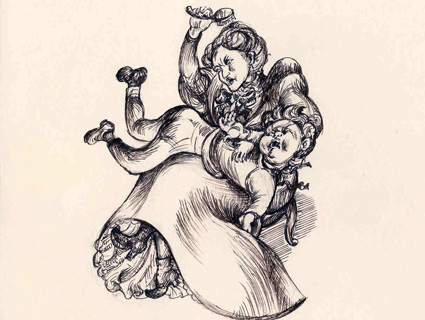 Mitt Romney is a man of many pledges. He’s pledged to sign a constitutional amendment banning gay marriage. He’s pledged to appoint a presidential commission to investigate the intimidation of gay marriage foes. He’s pledged to “look at every government program and ask this question: Is this so critical that it’s worth borrowing money from China to pay for it?” But over the last few weeks, as he’s tried to move to the center and reneged on many of his most contentious past promises, there is one pledge he hasn’t backed away from. It involves spanking.

In July, the GOP presidential nominee wrote a letter to Virginia conservative activist Michael Farris, an evangelical power broker in the critical swing state, outlining his opposition to the United Nations Convention on the Rights of the Child, which commits ratifying nations to protect children from discrimination. “My position on that convention is unequivocal: I would oppose Senate approval of the convention, and would not sign the convention for final ratification,” Romney wrote. “I believe that the best safeguard for the well-being and protection of children is the family, and that the primary safeguards for the legal rights of children in America is the U.S. Constitution and the laws of the states.”

The UN CRC hasn’t received much mainstream attention, but it’s becoming a rallying cry on the far right, mostly because social conservatives fear that its passage would imperil the rights of parents to, among other things, use corporal punishment on their kids. The first bullet point in Farris’ 2009 fact sheet explaining his beef with the treaty warned that “[p]arents would no longer be able to administer reasonable spankings to their children.” (The second was that juveniles could no longer be sentenced to life in prison.) Thanks to the efforts of Farris and others, at least 37 GOP senators have announced their opposition to the treaty.

The fear of a national spanking ban extends beyond the realm of international law. When the Supreme Court upheld most portions of the Affordable Care Act, Farris fretted that “Congress can regulate every aspect of our lives so long as there is a tax involved. Congress can ban spanking by enacting a $1,000 tax on those who do. Congress can ban homeschooling in a similar fashion.”

Romney has good company when it comes to pandering on the treaty. President George H.W. Bush refused to sign it, and President George W. Bush opted against pushing ratification. Opposition to the UN CRC has long been red meat for social-conservative activists. But if Republicans are united on the treaty, so is the rest of the world. Amnesty International, which is pushing the United States to change course, notes that “it is the first international treaty to guarantee civil and political rights as well as economic, social, and cultural rights.” As of 2008, when then-candidate Barack Obama lamented the United States’ dalliance on the topic, only one other nation had failed to ratify the treaty—Somalia. (No other UN treaty has received such near-unanimity.) Since that time, however, Somalia has signaled its intent on approving the CRC. Should newly minted nation South Sudan follow suit, the United States will be an exceptional nation once more.