In 2010, Rep. Paul Ryan (R-Wis.), now Mitt Romney’s running mate, called the Cayman Islands “the place you hide your money,” arguing that the United States needs to slash tax rates below those of other countries in order to make this country “a haven for capital formation.” But in previously unreported comments, from an interview with American Business Magazine in August 2011, Ryan went even further on the same topic, saying, “let’s make this country a tax shelter for other countries instead of having other countries be a tax shelter for America.”

Romney has been criticized for his use of controversial tax techniques and overseas investment vehicles, including some in the Caymans—where he has at least $30 million in assets—and other well known tax havens. Here’s how one expert described tax haven countries to our colleague Stephanie Mencimer:

James Henry, a former chief economist at McKinsey & Co., describes offshore tax havens like the “bar scene in Star Wars.” He explains, “Dictators and kleptocrats used them to conceal stolen loot. Arms dealers and drug dealers use them to launder their deals. Google and Apple and Pfizer use them to park their intellectual property and pay themselves tax-free royalties. Banks use them to park lousy loans and stash the offshore accounts and assets under management of their wealthy individual clients, many of which are paying zero taxes back home…And so on.”

Here’s the transcript of the full Ryan interview; the “tax shelter” line, which was pointed out to Mother Jones by a tipster, begins at 18:22 in the full video, which you can see here. You can also jump down to the full Q&A. 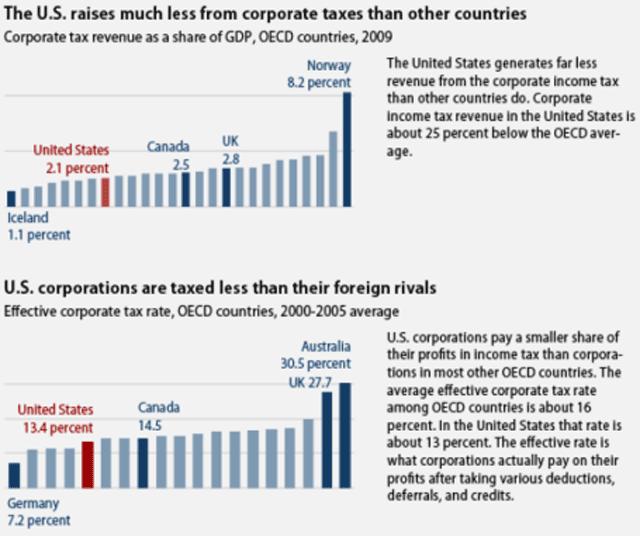 The United States’ reliance on corporate taxes has fallen dramatically over the last 60 years. In 1952, the government got over 30 percent of its revenue from corporate taxes; today, that number is less than 10 percent. Many big companies, including Boeing, General Electric, and Verizon, had negative effective tax rates between 2008 and 2011, despite raking in billions of dollars of profits.

Parts of the United States are already effectively global tax shelters. Delaware, which has very lax business formation requirements and disclosure rules, as well as low corporate taxes, “today regularly tops lists of domestic and foreign tax havens,” according to the New York Times. (Multiple entities associated with Romney and Bain Capital, the private equity firm he founded, were established in Delaware.) The Times‘ Leslie Wayne has more:

“What is so galling about secrecy in the United States is that there is no attempt to document who owns a corporation,” said Richard Murphy, a senior adviser at the Tax Justice Network, an independent organization based in London that researches tax havens. “Two million corporations are formed each year in the United States, more than anywhere else in the world. Delaware, in turn, is the biggest single source of anonymous corporations in the world.”

Mr. Murphy adds: “Why go to the Caymans when you can just go down the street?”

In 2009, the Tax Justice Network named the United States as No. 1 on its Financial Secrecy Index, ahead of Luxembourg and Switzerland. It cited Delaware as one of the reasons.

That, Mr. Murphy says, elicited howls in Wilmington. “The reaction was: ‘This cannot be true.’ Not only can it be true, it is true.” (The United States has since fallen to fifth place, behind Switzerland, the Caymans, Luxembourg and Hong Kong, after the group changed its method.)

Delaware subsidiaries are especially popular with global energy and mining companies like Exxon, Chevron and Rio Tinto. Among the top 10, some 915 subsidiaries have been set up in Delaware, compared with 51 in Switzerland and 49 in the Caymans, according to a report last September by the Norway chapter of Publish What You Pay, a London-based group that studies natural resources. The study said that this allows these resource extraction companies to put up a “wall of silence” about their far-flung operations and profits, especially from poor countries that may want a greater slice of the revenue. Exxon, Chevron and Rio Tinto declined to comment.

So, to review: The United States already collects comparatively low amounts of corporate tax. But Ryan wants to make the whole country like Delaware. He says this “would ultimately raise revenues and promote economic growth.” But if the US lowers its rates, there’s nothing to stop other countries—including the Caymans and Switzerland—from slashing their taxes and fees and making their restrictions on corporations even lower, too.

ABM: What would you do to limit or slow the migration of domestic business overseas?

PR: I would go to a territorial tax system. We should make the top American tax rate 25 percent for individuals and businesses. As you know, all the partnerships and LLCs are taxed at the individual rate. What the past Republican budget says is bring those tax rates down to 25 percent on the corporate side, as well. I think we’re shooting ourselves in the foot the way we tax ourselves. The rest of the world has moved toward a territorial system and we have not.

I just met with the chief of staff to the Council in Britain who stated not only have they just moved to a territorial system, they’re moving their top tax rate on businesses down to 23 percent. Ireland is at 12.5 percent. The international average corporate tax rate is 25 percent. We are the highest now at 35 percent. So, we are, literally, pushing capital overseas. Corporations are looking overseas and the US government is making it impossible for them to come back with their capital. That’s giving an incentive to keep capital overseas, not to domicile your company here, and we’re making ourselves ripe for takeover targets. Foreign companies are taking over US companies. This is occurring at an alarming pace—eventually the loyalties of these corporations will leave, as well.

The way we should look at increasing revenues to the government should not be class warfare or a bigger than ever tax increase approach. Economic growth comes from job creation and better economic growth policies that raise revenue through higher growth. Lowering tax rates at a broader base of income brings in more revenues and would help us close our fiscal gap.