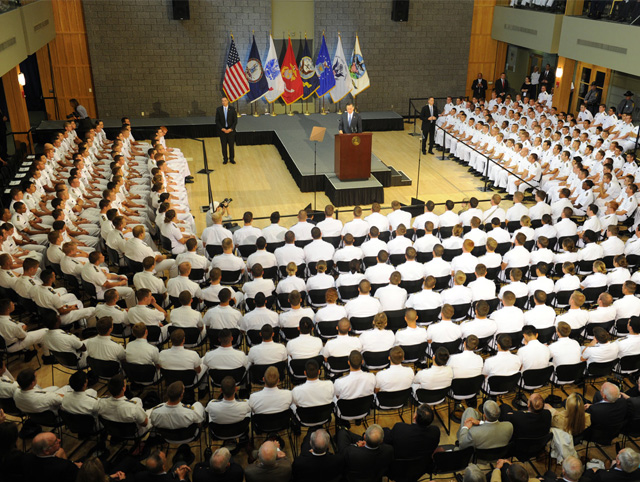 When Mitt Romney addressed a crowd of cadets at Virginia Military Institute on October 8, he was supposed to give a major foreign policy speech that steered clear of partisan politics. That’s because VMI personnel observe the US military’s tradition of political neutrality when in uniform. But internal emails obtained by Mother Jones show that Romney’s campaign pushed to burnish his commander-in-chief credentials by maximizing military optics around the event. Members of Romney’s staff sought to use the VMI logo in their campaign materials, requested that uniformed cadets be let out of class early to attend Romney’s speech, and asked VMI “to select a few cadet veterans and give them a place of honor” standing behind Romney during his address.

As the campaign pushed for these requests, VMI officials pushed back, concerned that they were for partisan purposes. Each request was denied by the state-run institution, whose students serve in the US military’s Reserve Officers Training Corps, so that VMI would not be seen as endorsing Romney’s candidacy. The Romney campaign also pressured VMI to play host to “15 to 20” retired admirals and generals at the school who traveled there to endorse Romney; VMI eventually relented to that request.

The nearly 70 pages of email communications between VMI and Romney’s staff were released to Mother Jones as part of a Virginia Freedom of Information Act request. They show that even as VMI officers agreed to host the speech and give their cadet corps what they saw as a once-in-a-lifetime educational opportunity, they were wary of the campaign’s intentions.

“I am very concerned about this,” Susan Rabern, a retired Navy captain who runs VMI’s ethics program, wrote in an email to senior staff prior to Romney’s speech. “The Center for Leadership and ETHICS cannot engage in political ‘in kind’ campaign contributions,” she stated, adding that “this is a political event in a building that only is rented to outside entities for a fee. This is a campaign speech, arranged by a political campaign.” (Rabern declined to comment to Mother Jones about the email.)

That wasn’t the intent of the event as it was first described to the school by campaign staffers. “[The] Speech will be a sober foreign policy vision for a Romney Administration. It is not a stump or a rally,” Romney defense policy adviser (and VMI alumnus) John Noonan assured VMI’s chief of staff in his initial email asking VMI to host the speech. Referring to a distinguished graduate of the school, who received a Nobel Peace Prize for championing US financial assistance to postwar Europe, Noonan added: “It is designed as Presidential event [sic] that invokes the legacy of George Marshall.”

But Romney is not the president—he’s a private citizen actively seeking office, and VMI officials expressed concern accordingly. “We are ensuring that this is not a VMI endorsed campaign stop,” the superintendent’s executive assistant wrote to the school’s board of visitors. “No campaign literature will be passed out.”

Romney’s people pushed political requests, however. Noonan later asked VMI to accommodate “no more than 20” retired senior military officers, who would endorse Romney while he was at the school for the speech. Calling this a “new twist” on the original request, VMI Chief of Staff Jeffrey Curtis seemed unenthusiastic. “This isn’t something where we’re going to roll out a red carpet for them,” he wrote to a coworker. Nevertheless, the Institute found a place to host the officers, after setting ground rules “that allow us to remain non-partisan, non-political.”

Later that day, Noonan emailed Curtis with another request:

Just a few days prior to the speech, Romney handler Craig Handzlik asked a VMI official if there was “any way we might be able to let those cadets out of class” to attend the address. The official responded: “We can’t require cadets to miss class for the event or professors to excuse cadets/cancel classes for the event.”

The following day, Romney staffer Jon Palmer asked the school’s public affairs director “if you have a high-resolution copy of VMI’s logo that we can use?” The official rebuffed that request:

McDonnell ended up handling the introduction. (Noonan declined to comment on his role in planning the event. “I’m a policy guy,” he told Mother Jones.)

In his speech, Romney thanked General Peay for “his invitation,” but the emails dispute that, and Colonel Stewart MacInnis, VMI’s director of public relations, says that wasn’t how the event came to be. “We didn’t invite [Romney], the campaign approached us,” he says, adding that the Institute was excited to host such a high-profile speaker on international affairs, a favorite major for cadets. But he acknowledged that the school was walking a fine line: Romney’s speech was “certainly in keeping with the political message in a campaign year,” but “we did not want it to be perceived that we were endorsing this candidate or any other candidate.”

MacInnis says that after Romney called the Institute, officials at the school reached out to the White House to invite President Obama to address the cadet corps, too.

Sitting politicians customarily get a considerable amount of latitude in delivering policy speeches at public universities, from John F. Kennedy’s “Flexible Response” speech at West Point in 1962, to the delivery of the famed “Bush Doctrine” there by George W. Bush in 2002, to multiple appearances at military academies and state schools by President Obama and Vice President Biden.

While campaigning as a presidential candidate in spring 2007, Sen. John McCain delivered a hawkish national security speech of his own at VMI. McCain, however, was (and still is) the ranking member of the Senate Armed Services Committee, who had recently completed his fifth trip to Iraq and could be credibly seen as a powerful government voice on US policies abroad.

As a retired governor and active political candidate, however, Romney can claim no such bona fides. “There’s no doubt that this [was] a campaign event,” says Mike Breen, head of the left-leaning Truman National Security Project. “His only job is right now is running for president.”

UPDATE, Wednesday, October 17, 10:35 a.m. EDT: Virginia Military Institute released these public records to Mother Jones with personal contact information of Romney campaign staffers intact. We have redacted personal cellphone numbers as a courtesy to those staffers in accordance with a post-publication request from the campaign.