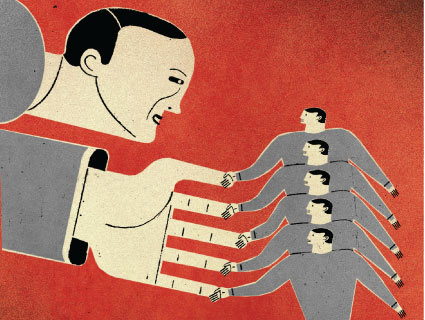 On a Tuesday afternoon in early September, the lobby of the Ritz-Carlton in Charlotte, North Carolina, hummed with the sound of well-heeled Democrats chatting amiably over white wine and hors d’oeuvres. It was the first day of the Democratic National Convention, and donors, lobbyists, and party heavyweights had commandeered the Ritz as their de facto headquarters. Two silver-pated politicos, House Democratic Caucus chair John Larson and former Connecticut Sen. Chris Dodd, now Hollywood’s top lobbyist, shared a hug before gliding toward the lobby bar. American Bridge 21st Century super-PAC founder David Brock huddled with an aide near the cupcake bar, waiting for a pause in the pouring rain outside.

Tieless in a navy suit, hunched over one of his two iPhones, Sean Eldridge blended in effortlessly. In less than two years he’s donated nearly $100,000 to a slew of Democratic candidates, including President Obama and House Minority Leader Nancy Pelosi, as well as the Democratic Congressional Campaign Committee. Seated around a candlelit table, Eldridge and I talked politics and money. But the catch is that Eldridge wants to get big money out of politics. And his game plan for cleaning up New York state’s noxious politics is arguably the best shot for fighting corruption anywhere in America.

A strikingly handsome Ohio native who turned 26 in July, Eldridge is no full-time activist. He runs his own investment fund in the Hudson Valley, where he lives with his husband, Facebook cofounder and New Republic publisher Chris Hughes. And he knows the world of big campaign money from the inside out: He’s a member of the Democracy Alliance, an exclusive group of wealthy progressive donors, and has hosted fundraisers for New York Gov. Andrew Cuomo and Sen. Kirsten Gillibrand.

Eldridge backed into New York’s political money wars. In 2009, he dropped out of Columbia Law School the day after the state Senate defeated a same-sex marriage bill. He joined Freedom to Marry, a national organization backed by gay philanthropist Tim Gill, which helped oust three unfriendly New York lawmakers and whose pressure on Albany proved crucial in passing same-sex marriage on the second try in 2011. Freedom to Marry and other outside groups also rallied the public behind the cause, creating a groundswell that helped lift the bill to passage.

While in the trenches of the marriage equality fight, Eldridge had an epiphany: Money influences every policy fight, large and small. Control the spigot of campaign cash and you can get the policies you want. “Voters will list the 10 issues they care about most, and none of them is campaign finance,” he told me. “But what I realized is that campaign finance underpins every one of those issues.”

The annual cost to taxpayers for a statewide version of this public financing system would $3 or $4 per New Yorker. For the cost of a latte, citizens can curb big-money politics.

In June, Eldridge took a cue from the marriage equality fight by launching Protect Our Democracy, a PAC/nonprofit focused on promoting the issue of political money reform. Protect Our Democracy’s main goal: introducing publicly financed matching campaign contributions to New York state. It plans on working with a coalition of progressive groups to replicate New York City’s practice of matching every dollar given by small campaign donors (up to $175 each) with $6 in taxpayer money. By supersizing small-dollar gifts, the thinking goes, candidates will listen to ordinary supporters more than corporations, unions, lobbyists, and trade groups. Such a plan would also encourage candidates who aren’t wealthy or well connected. According to an analysis by the Campaign Finance Institute, New York City’s system works as intended: The number of small donors to competitive candidates has spiked by 29 percent, and the overall share of small donations (not including public matching funds) has jumped 26 percent.

The annual cost to taxpayers for a statewide version of this public financing system, Eldridge says, would be negligible—$3 or $4 per New Yorker. That’s central to his pitch: For the cost of a latte, citizens can curb big-money politics.

New York could use the overhaul, critics say. Between 1976 and 2010, more public officials in the Empire State were convicted for corruption than anywhere else in the United States, according to researchers at the University of Illinois-Chicago. Reformers blame this rampant sleaze on the state’s lax campaign laws: Individuals can give candidates up to $150,000; corporations and their subsidiaries can give up to $5,000. The State Integrity Investigation project recently gave New York a D- for campaign finance on its Corruption Risk Report Card. Albany, for many New Yorkers, is shorthand for dysfunction and graft.

This fall, Eldridge says, his group’s PAC will run ads attacking anti-reform lawmakers and backing advocates of change. Then, postelection, its nonprofit 501(c)(4) (which does not have to disclose its donors) will build support for the overhaul. Eldridge notes the irony of this well-funded strategy, but he says it’s necessary to rouse the public. Ideally, he explains, the Legislature will take up campaign reform in December, when memories of super-PACs and the big money behind this year’s election are still fresh. Americans already say they’re disgusted with the influence of money in politics; 67 percent of respondents in an Associated Press poll said there should be limits on federal campaign contributions.

Of course, none of this matters without Cuomo’s support. During his 2010 campaign, he declared that New York’s existing laws “fail to prevent the dominance of wealthy contributors and special interests in our government” and called for public financing. In August, he previewed three policy priorities for the rest of his term; public financing was one of them. Activists believe that Cuomo thinks campaign reform can boost his already stratospheric approval rating—and his visibility outside the state. Reformers also see him as a future presidential candidate who could take the fight against special interest cash national. (A spokesman for the governor did not respond to interview requests.)

Ultimately, Eldridge, his donors, and his allies see their effort in New York as a potential model for other states. “It’s like the old showbiz line,” says Nick Nyhart, president of the pro-reform group Public Campaign. “If you can make it here, you can make it anywhere.”