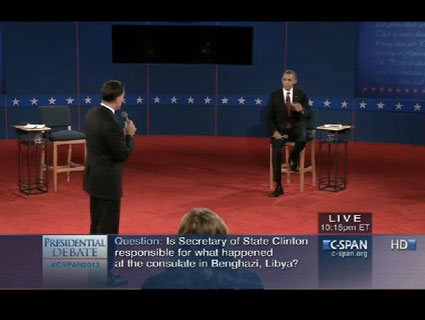 Mitt Romney tried to catch the president of the United States in a lie last night and ended up kicking himself in the pants.

Sparring with Obama over Libya, Romney said that “it took the president 14 days before he called the attack in Benghazi an act of terror.” In fact Obama had referred to the attack as “an act of terror” in a speech in the Rose Garden the day after four Americans were killed at the US consulate in Benghazi. Moderator Candy Crowley ended up fact-checking Romney in real-time, to applause from the audience, as Romney himself looked on in disbelief.

Here’s what Obama said in his Rose Garden speech:

No acts of terror will ever shake the resolve of this great nation, alter that character, or eclipse the light of the values that we stand for. Today we mourn four more Americans who represent the very best of the United States of America. We will not waver in our commitment to see that justice is done for this terrible act. And make no mistake, justice will be done.

Conservatives, angry over what was an obviously embarrassing exchange for Romney, have tried to argue that somehow this reference didn’t count. Some reporters have already been successfully spun on this—Slate‘s John Dickerson wrote that “If you look at the president’s statement in the Rose Garden, he does use that phrase, but it’s a throwaway cliché. Indeed, it arguably wasn’t about the attack at all, just a bromide about more general acts of terror.” But if you look at the above context, there’s absolutely no way the president is referring to anything other then the attack in Benghazi, because his subsequent sentences refer to the victims and include a vow that “justice will be done.” In context, it’s impossible to read that as a reference to Dickerson’s “general acts of terror.” The speech was, in its entirety, a response to the attack in Benghazi.

No matter how you slice it, Romney’s claim that Obama took two weeks to refer to the Benghazi attack as “an act of terror” was flat wrong. As Foreign Policy‘s Josh Rogin notes, Obama referred to the Benghazi incident as “an act of terror” a second time at a campaign event in Colorado just a day after the Rose Garden speech. Politico‘s Josh Gerstein was the first reporter to note that the conservative talking point here was false weeks ago—but his observation went largely ignored.

So how did Romney end up getting it so wrong? As the Washington Post‘s Erik Wemple notes, Romney was simply repeating what’s been written ad nauseam in the conservative media. For conservatives, the administration’s insistence—chiefly UN Ambassador Susan Rice’s remarks shortly after the attack—on pointing to a widely seen anti-Islam video on YouTube as a cause was the same as claiming the attack was not an act of terror. But that’s simply not true, because Obama had identified the incident as “an act of terror” even when the administration said it believed the video was the cause. The idea that blaming the video meant not acknowledging the attack as an act of terrorism is a false distinction. They’re not mutually exclusive. Republicans had convinced themselves otherwise.

The larger conservative criticism is that the administration lingered on the video explanation because it didn’t want to acknowledge a failure in its record on terrorism: It failed to identify and prevent a premeditated attack on American citizens. That’s a fair argument for conservatives to make, but it’s an argument—it’s not amenable to fact-checking. Had Romney simply made that larger point accusing the administration of misleading in its accounting of events in Benghazi, it’s doubtful Crowley would have said anything at all. Instead, Romney foolishly focused his attack on an easily verifiable fact that he got wrong.

Partisanship can be helpful in the search for accountability. But conservatives have been so eager to exploit the incident in Libya for political advantage that they’ve focused on inconsequential details like what the president said when. The facts surrounding the Benghazi attack are damning enough on their own. But thanks to their penchant for cherry-picking information, the GOP left their presidential nominee on stage with his mouth agape, struggling to understand how something he knew for a fact wasn’t a fact at all.

UPDATE: A previous version of this post mistakenly referred to Erik Wemple as “Eric Wemple.”