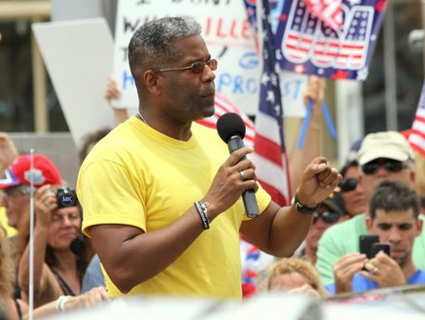 Update: The Associated Press has called Minnesota’s 6th district for Rep. Michele Bachmann, who held off Jim Graves by one point. With 100 percent of precincts reporting, Rep. Allen West trails by about 2,500 votes, but the race has not yet been called.

Adding to the GOP’s misery on Tuesday night: The continued demise of the tea party wave. Reps. Michele Bachmann (R-Minn.) and Allen West (R-Fla.) were both locked in tight races with their Democratic challengers as of early Wednesday morning, with recounts possibly forthcoming. (Update: As of 4 a.m. EST, the district’s final tally showed West losing by just under 2,500 votes.) A third ringleader, Rep. Joe Walsh (R-Ill.), lost to Iraq war veteran Tammy Duckworth by nine points.

Bachmann’s poor performance—she led by just 1244 votes with 91.4 percent of precincts reporting as of 4 a.m. EST—was a reflection of her own dimming popularity in a district she’s represented since 2006. She was expected to cruise to re-election after a non-partisan redistricting panel made her suburban Twin Cities seat, already Minnesota’s most conservative, even more red. But after a quixotic presidential campaign and a never-ending string of embarrassing statements (such as her assertion that a top Hillary Clinton aide was a Muslim Brotherhood plant), that’s not how it turned out. Bachmann faced off against Jim Graves, a Minneapolis hotel magnate who was able to give his campaign seed money and—critically, in a tight race—persuade the Independent Party not to field a candidate in the race. That the race was tightening was evident over the final weeks of the campaign, as Bachmann sought to redefine herself, improbably enough, as a independent-minded deal-breaker capable of working across party lines to bring home pork for her district.

West, a freshman legislator, sought to win a district that went to Obama by just three points in 2008. But he faced a formidable challenger in Patrick Murphy, a former Republican whose family runs a huge contracting business in South Florida. Murphy picked up the backing of national Democrats (Bill Clinton flew to West Palm Beach for a fundraiser) and raised more money than almost any other challenger in the country this fall. He also received a boost from a super-PAC, American Sunrise, seeded with $250,000 from Murphy’s father, Thomas. Like Bachmann, West tried to shift attention away from his bomb-throwing rhetoric, running campaign ads portraying himself as a defender of the social safety net, and a dyed-in-the-wool environmentalist. To wit:

In one of the campaign’s most memorable television spots, he drew a contrast between his two-decade military career and Murphy’s youth—seizing on a disorderly conduct arrest from 2003, when West was on the verge of shipping to Iraq. (Left unmentioned: The detainee abuse that sparked West’s return stateside.) Watch:

With 97 percent of precincts reporting, Murphy led West by just over 1,000 votes.