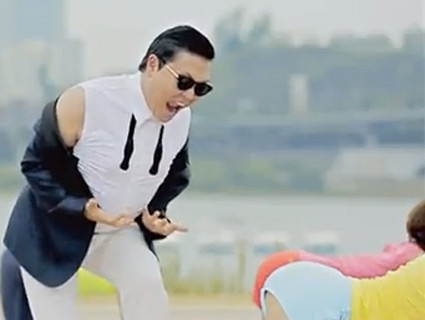 As the Obama reelection campaign wound down, the campaign committed him to a string of radio interviews noted for their focus on the big issues of our time, such as collateral damage resulting from the administration’s controversial drone program, spicy food, football teams, singer-songwriter Flo Rida, singer-songwriter Pitbull, his friendship with George Clooney, and Carly Rae Jepsen’s hit single “Call Me Maybe.”

And on the day he will find out if he will serve a second term, the president taped a segment with radio station WZID-FM in New Hampshire.

Via the AP, an election-day quote from the president:

During a radio spot with WZID-FM in New Hampshire, the commander in chief was pressed on whether he and first lady Michelle would do a rendition of the South Korean rapper PSY‘s hit [“Gangnam Style“], which has hundreds of millions of views on YouTube.

“I just saw that video for the first time,” Obama replied. “I think I can do that move. But I’m not sure that the inauguration ball is the appropriate time to break that out.”

“Maybe,” he concluded, “do it privately for Michelle.”

So if Obama loses his reelection bid, one of the last things he will have addressed before his defeat will have been “Gangnam Style.”

That is the way history will be written.

In case you’ve been living under a soundproof boulder for the past four months, “Gangnam Style” is PSY’s internationally recognized signature rap song. The term is also used to describe the PSY-originated style of dance shown in the song’s viral music video, in which the the Korean rapper and back-up dancers gallop in calculated, foot-alternating rhythm, whilst keeping their limp wrists crossed and flicking them in a loose but deliberate manner. (Think of it as a high-speed, modern-dance rendering of a performer riding atop a willing and shrunken steed.)

The lyrics (the vast majority of which are sung in Korean) include rhapsodic gems like, “I am a man who looks gentle but the time to play comes, then I can be willing to change in accordance with it  /  … I am a man whose thought is more rough and bumpy than muscles,” or, “I am a man who drink coffee bottoms up before it cools down.” (For full English translation, click here.)

Fine, you win. Here’s the music video, to better illustrate: