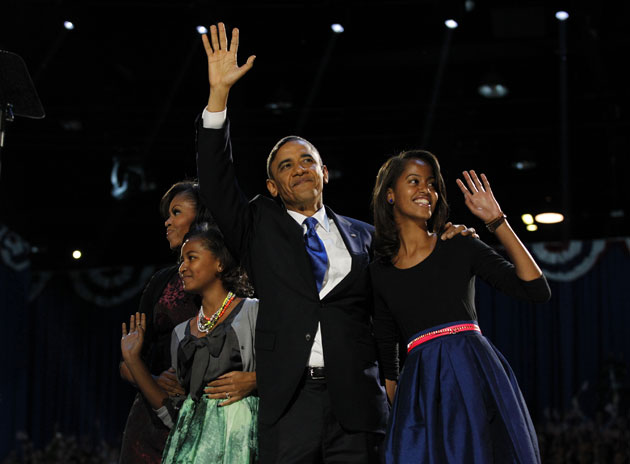 President Barack Obama greets the crowd at his election-night headquarters with his family.Brian Cassella/MCT/Zuma

On Tuesday night, a country that once sold black people as property elected a black man to its highest office for a second time. Twice now, Virginia, the seat of the old Confederacy, has given its electoral votes to America’s first black president. Although Barack Obama’s presidency has often departed from the best moral instincts of American liberalism, from his dismal record on clemency to his stewardship of an unaccountable national security state, the fact of his presidency represents a triumph of American liberalism’s ability to push the boundaries of what is possible.

Liberalism’s triumph in the 2012 election goes far beyond the reelection of the first black president of the United States:

The emerging Democratic majority, as Ruy Teixera once put it, seems to have emerged. But Obama owes that coalition, to an incredible degree, to the decision of Republicans to alienate every significant minority in the country.

Blind to their own identity politics, Republicans dismissed the concerns of gays and lesbians, and women and minorities, as wish lists from “special interests.” The right killed George W. Bush’s effort at immigration reform in 2006, and was then captured wholesale by immigration restrictionists whose naked hostility to Latinos meant that Obama could preside over more than a million deportations and still win the Hispanic vote in a landslide. American Muslims, who once overwhelmingly voted for Bush, became a toxic fixation for Republicans who began to regard them as a potential fifth column. Granted a majority in Congress with a mandate to heal a bleak American economy, Republicans chose to focus on restricting women’s access to abortion and birth control. Eager to deny Obama any legislative accomplishments whatsoever, the GOP attempted to filibuster the repeal of the military’s policy banning gays and lesbians from open service. Republicans shouldn’t blame Romney for his defeat, not after they paved such a narrow, winding road to victory.

The big question now is whether and to what degree 2012 heralds the emergence of a new liberal consensus, a tacit agreement that government has a responsibility to provide for certain basic needs but to stay out of people’s business when it comes to other matters. Ross Douthat, a conservative columnist at the New York Times, has described the Obama coalition of women, minorities, and young voters as a “realignment,” writing that “the age of Reagan is officially over, and the Obama majority is the only majority we have.”

To the extent that we are looking at a new Democratic governing majority, Obama didn’t build that—not by himself. He had a great deal of help from Republicans whose refusal to acknowledge a changing American electorate narrowed their political coalition. Because Republican intolerance played such a decisive role in the electorate that emerged Tuesday, it’s hard to draw a broad conclusion about a long-term ideological shift in the United States, or to see Obama’s coalition as a lasting one.

Absent a successful Democratic-led effort at immigration reform, for example, the Latino vote likely remains up for grabs. Young voters could grow disillusioned by an Obama administration that continues its aggressive prosecution of the war on drugs. Someday, religious conservatives may realize that observant American Muslims are natural allies rather than domestic enemies. The success and permanence of Obama’s new coalition, and of American liberalism, depends on what happens now—particularly whether the American economy recovers enough in the next four years for Obama and the Democratic Party to be able to claim credit for restoring prosperity, not just bringing the country back from the brink.

Douthat is right when he says that the Obama coalition, which seems likely to grow even stronger as the country grows more diverse, might “not last forever; it may not even last more than another four years.” Remember: The Democrats were once the party of the Deep South, and the Republicans were once the party of civil rights. In politics, no coalition is permanent.