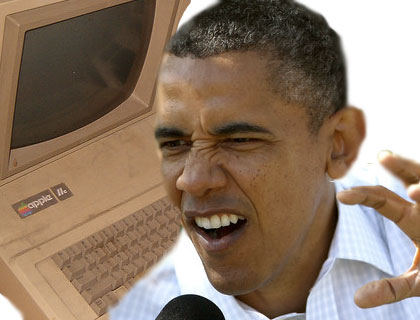 Imagine if someone like Lisbeth Salander, the computer hacker in the Girl With the Dragon Tattoo, decided to poison New York’s water supply or tried to turn off Washington’s power grid. Would America be able to defend itself? The Obama administration isn’t sure, so it’s moving to beef up cybersecurity measures and to require companies to explain how they plan to defend against cyberattacks. But some conservatives are accusing Obama of trying to take over the internet.

“If you let the government take over some part of the internet, it’s going to take over more and more,” says Julie Borowski, a policy analyst at the tea party group FreedomWorks. “The Founding Fathers wouldn’t support it.”

Congressional Republicans are worried, too. “We cannot afford a hasty, unilateral action that will only serve to bolster the efforts of less democratic nations to stifle the very free exchange of ideas and expression that has allowed the Internet to flourish,” a group of House and Senate Republicans warned in an October letter to the president.

Some internet policy groups have also expressed concerns. “Frankly, we don’t know” what sort of information the government might eventually request from companies, says Mark Jaycox, a policy analyst at the Electronic Frontier Foundation (EFF). “Information sharing is a slippery slope.”

At issue is an executive order on cyberterrorism that the White House is widely expected to issue at some point in the coming weeks. (Lawfare posted a September 28 draft of the order earlier this month.)

Some of the opposition to the planned order stems from the memory of the Stop Online Piracy Act (SOPA). That bill, which the Obama administration didn’t support, sparked widespread opposition and drew protests from internet giants Google and Wikipedia, which said that the bill included a free speech “kill switch.” But the administration insists its cybersecurity plans have nothing to do with that controversial bill. “The administration is focused on improving the cybersecurity of US critical infrastructure, not regulating the internet,” Caitlin Hayden, a White House spokeswoman, told Mother Jones.

Angela Canterbury, the director of public policy at the Project on Government Oversight (where I used to work), agrees with the White House that the reaction to the order is hyperbolic. “I think that it would be terrific to have more reporting on cybersecurity incidents.”

And experts say the problem the White House is trying to address is real. Utility operators are increasingly connecting their control systems to the internet, explains Richard Bejtlich, the chief security officer at Mandiant, a company that offers cybersecurity services for Fortune 100 companies. These systems, which run things like temperature, grids, and valves, are then left open for hackers to exploit them by say, injecting malicious code and messing up the water supply.

“In some cases, operators don’t even know they’re connected until something bad happens,” Bejtlich says. “And it’s not getting any better; these operators are 10 years behind everyone else.”

The September draft executive order asks that owners and operators of critical infrastructure participate in a “voluntary program” of adopting cybersecurity standards. It doesn’t include many incentives for companies to participate…yet. But that could change. The draft order gives the secretary of defense and the administrator of general services 90 days to decide whether the government has the power to award companies that participate in more federal contracts. If that happens, companies will have a big incentive to meet cybersecurity standards.

“Many large vendors have or strive to have federal business,” writes Paul Rosenzweig, a visiting fellow at the Heritage Foundation who served as deputy assistant secretary for policy in the Department of Homeland Security under George W. Bush. “Voluntary compliance would become effectively compulsory.”

But according to Bejtlich, the government is already asking companies to share information on cybersecurity incidents, without catastrophe. Last year, the Securities and Exchange Commission issued guidance requesting that publicly traded companies report significant instances of cyberattack. After companies still weren’t telling investors when they got hacked, the guidance essentially became a requirement for big companies like Amazon and Google, bringing new incidents to light.

“I’m a big fan of that approach,” Bejtlich says, although he would prefer legislation over an executive order. “As an investor, I want to know about these things.”

The Obama administration has tried the legislative route, but the latest cybersecurity bill the president backed failed in the Senate on Wednesday, making the White House even more likely to go ahead with the executive order. “The current prospects for a comprehensive bill are limited, and the risk is too great for the administration not to act,” Hayden says.

Even Jaycox, the EFF policy analyst who had worries about the order, notes that the government already regulates chemical plants, electric grids, and railroads. Obama’s executive order would simply put those practices in place in the virtual landscape.

“It will not destroy the internet,” he says.