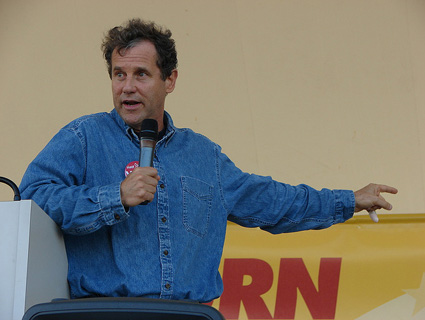 Republican super-PACs and dark-money groups hurled everything they had at Sen. Sherrod Brown (D-Ohio)—upwards of $40 million in outside money, according to the Brown campaign. Karl Rove’s Crossroads GPS, the Koch-backed Americans for Prosperity, the US Chamber of Commerce, you name it: The heavyweights in the GOP big-money universe blitzed Ohio with TV ads, mailers, and billboards bashing Brown and supporting his opponent, Republican Josh Mandel.

But Brown didn’t buckle. Instead, he defeated Mandel on Tuesday. The Associated Press called the race at 9:23 p.m. EST.

Brown’s defeat deals a blow to the GOP’s hopes of reclaiming control of the US Senate. (Democrats controlled 53 seats heading into Tuesday’s election.) A year ago, the Republican Party and powerful outside groups ranked Brown alongside Democrats Jon Tester of Montana and Claire McCaskill of Missouri as vulnerable incumbents ripe for ousting. The road to a Republican Senate majority ran through Ohio, Montana, and Missouri, as well as contested states like Massachusetts, Nebraska, Nevada, and North Dakota. That’s why GOP groups invested tens of millions of dollars in beating Brown and electing Mandel. In Ohio, Brown has left with them nothing to show for it.

Mandel, Ohio’s youthful treasurer and an Iraq war veteran, proved no match for the gravelly-voiced Brown. He was dogged by missteps and mini-controversies throughout his campaign: stubbornly refusing to take a position on the US auto bailout, racking up a miserable attendance record for boards on which he served, even confronting a Democratic tracker in the presence of a reporter and then misleading the public about it. At one point Mandel had amassed more “Pants on Fire” ratings from PolitiFact Ohio than any other candidate in Ohio.

Despite all the money poured into defeating Brown, Mandel never took the lead in the race. The closest Mandel got was a 3-point deficit in early September. Heading into Election Day, Brown led Mandel by 5 percentage points, 50 percent to 45 percent, in RealClearPolitics‘ polling average. Mandel’s lackluster support could have something to do with his refusal to stake out a position on the auto bailout. The bailout saved tens of thousands of jobs in Ohio, a state that’s home to car plants and auto suppliers, and the bailout itself was a salient issue in both the Brown-Mandel Senate race and the presidential race. Brown voted for the bailout and openly touted his choice throughout the campaign.

Brown’s victory puts the Senate Democrats one seat closer to keeping their slim majority. It also serves as a lesson: Even a staggering amount of political money can’t always propel a subpar candidate to victory.