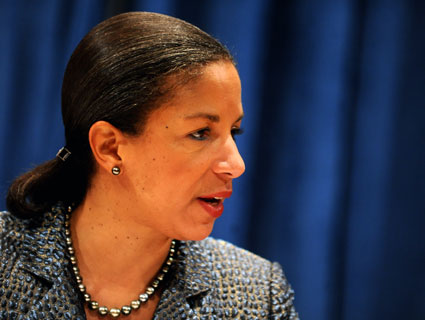 On Wednesday, Sen. Susan Collins (R-Maine) opened up a new front in the GOP war on Susan Rice. After Collins met with Rice, the US ambassador to the United Nations who may be President Barack Obama’s pick to replace Hillary Clinton at the State Department, the senator echoed the complaints her colleagues John McCain, Lindsey Graham, and Kelly Ayotte have hurled at Rice regarding her recitation on Sunday talk shows of administration talking points about the September 11 attacks on US facilities in Benghazi, Libya. Collins—who has now essentially endorsed the GOP’s oddly targeted crusade against Rice—went further and raised a new (but old) matter, questioning whether Rice was somehow partially responsible for security failures that led to hundreds of casualties in the 1998 bombings of US embassies in Kenya and Tanzania when she was assistant secretary of state for African affairs. Yet State Department reports undermine Collins’ expanded line of attack.

Up to now, McCain and his crew have concentrated their fire on one aspect of the Benghazi affair: Rice’s use of CIA talking points that described the terrorist assault as primarily caused by Muslim outrage over an amateurish anti-Islam film. As the New York Times reports, Rice “accurately recited the talking points the intelligence agencies prepared.” And the CIA had purposefully left out information, according to the Times, that “might tip off the malefactors, skew intelligence collection in Libya and interfere with the criminal investigation.”

Talking to reporters after meeting with Rice on Wednesday, Collins, one of the few moderate Republicans remaining in the upper chamber, repeated the McCain line, noting she was “troubled” by Rice’s appearances on those Sunday talk shows five days after the Benghazi attacks. She then noted she was also concerned about Rice’s actions prior to the 1998 bombings: “What troubles me so much is the Benghazi attack in many ways echoes the attacks on both embassies in 1998, when Susan Rice was head of the African region for our State Department. In both cases, the ambassador begged for additional security.”

With this remark, Collins was suggesting that Rice had screwed the pooch in 1998. It’s a powerful charge, suggesting Rice’s supposed inaction may have played a role in the deaths of hundreds. But that’s not what a State Department inquiry found.

On August 7, 1998, powerful truck bombs simultaneously exploded at the US embassies in Dar es Salaam, Tanzania, and Nairobi, Kenya. The explosion in Kenya killed 213 people; 44 were embassy employees, including a dozen Americans. Four thousand people were injured by the blast. In Tanzania,12  people, none Americans, were killed, and 85, including many Americans, were injured. Eventually, US intelligence and law enforcement linked Osama bin Laden and Al Qaeda to the bombings; bin Laden was indicted for his role in the attacks. (Several of the plotters were apprehended, tried in the United States, convicted, and sentenced to life without parole.)

As is standard procedure, after these bombings, the State Department established Accountability Review Boards to investigate each attack. Both were chaired by retired Admiral William Crowe, who had been chairman of the Joint Chiefs of Staff and later a US ambassador to England, and these panels produced classified and unclassified reports on the assaults. (Hillary Clinton has ordered such a review of the Benghazi assault.)

The reports noted numerous security failures and oversights that preceded the bombings. But they don’t back up Collins’ characterization. Neither mentions Rice, who was a policy person who would not be in charge of embassy or security operations. The report on the Tanzania attack says nothing about the US ambassador there begging for additional security. It notes that “the security systems and security procedures” at the embassy “were in accord with, and in some ways exceeded, Department of State standards for overseas posts assessed as having a ‘low’ threat rating for political violence and terrorism.”

The Kenya report recounts a more complicated tale than that of an ambassador crying for better security and Rice and others at State ignoring the pleas.

In late 1997, according to the report, the US ambassador to Kenya, Prudence Bushnell, sent a cable to the State Department noting that due to threats of crime, political violence, and terrorism, the embassy, located at the intersection of two of the busiest streets in downtown Nairobi, was vulnerable, particularly because it was not sufficiently set back from the street. She asked for a new chancery. The report notes:

The Department responded to the Ambassador’s cable in January, 1998, saying that after a review of the threat, the post’s current security rating for political violence and terrorism of ‘medium’ was appropriate, and that no new office building was contemplated by [the Department’s Foreign Building Operations]. The Department offered to send a security assessment team to assist the Embassy in identifying areas where security could be upgraded, and they found ways to reduce the number of embassy personnel, through re-assignments to Pretoria.

There would be no new chancery, but Foggy Bottom, which did send a security assessment team to the Nairobi embassy, responded to Bushnell’s concerns in other ways, according to the report:

[T]he Department was prepared to support all the post’s requests for upgrades, even beyond the normal standards required for a medium threat post. The embassy senior management, the [regional security officer], and the visiting team did not particularly focus on upgrades in the rear of the embassy [where the bombing occurred] or possible vehicle bomb attacks, but instead concentrated on ways to reduce the danger from crime and political violence. They approved a fence for the parking lot in front of the Embassy, as well as roll down doors for the chancery’s front entrance and the rear basement garage door. (The latter door, broken for several months, had been replaced by a temporary two panel swing door which remained open during the day.)

Following the security review team’s visit to the embassy, Ambassador Bushnell still pressed for a new embassy building. That matter was the purview of not Susan Rice but someone at a much higher pay grade: Undersecretary of State for Management Bonnie Cohen. According to the report, Cohen told Bushnell that “because of Nairobi’s designation as a medium security threat post for political violence and terrorism and the general soundness of the building, its replacement ranked relatively low among the chancery replacement priorities.” But Cohen noted the department would be spending $4.1 million to put in more secure windows.

Various security improvements were underway at the Nairobi embassy when the attack happened. But the report states, “As it turned out, they would have made no difference in mitigating the blast, given its size. Nor would they have deterred the terrorists from getting as close to the chancery as they did.”

The true security vulnerability at the embassy turned out to be its rear parking lot. That’s where the terrorist drove in the explosives-laden truck—and there had been no concerted effort to secure that part of the embassy. The report notes:

Sporadic efforts by the embassy to gain control over the back packing lot…met with limited success…That the embassy did not seek more actively to gain control of the back lot reflected the prevailing view in the embassy and in Washington at that time that the crime threat was far more serious than the terrorist threat. This conclusion was based in part on the judgment of intelligence officials in Washington and in Nairobi that the potential terrorist threats had dissipated by the latter part of 1997 and that no new threat had been uncovered specifically aimed at the embassy. Terrorism was seen as a serious but non-specific potential threat, whereas crime, including muggings and murder in the immediate vicinity of the embassy, was a daily reality that posed a continual threat to every member of the embassy family.

The Nairobi Accountability Review Board report sums up the issue this way:

The Ambassador alerted Washington to the embassy’s extreme vulnerability and called for and received assistance in 1998 from the Department of State for a few physical security upgrades beyond those required for a “medium” threat post for political violence and terrorism. In her messages to Washington, the Ambassador also requested that the chancery be relocated. Officials throughout the Department of State rejected this, citing lack of funds and the designation of Nairobi, as a medium threat post, as an unlikely terrorist target…Security systems and procedures at the embassy were implemented well within, and even beyond, the medium threat level established by the Department of State.

Obviously, there were numerous security failings prior to the attacks in Nairobi and Dar es Salaam. The Kenya review noted that the “most critical [shortcoming] was that no attention was paid to vehicle bomb attacks” in embassy security procedures and systems. Collins was correct to note that the ambassador in Nairobi had asked for additional security. Yet headquarters had indeed responded, though Cohen had not granted Bushnell her request for a new embassy. Even if Foggy Bottom had said yes, no new embassy complex would have been constructed before the bombings.

These reports undercut Collins’ insinuation that 14 years before Benghazi Rice was involved in (and bore some responsibility for) related screwups that also resulted in dead Americans overseas. Collins’ attempt to tie Rice to the 1998 attacks doesn’t bolster the Republicans’ thin case against Rice. It does provide more reason to ask, why are they going after her with such a vengeance?