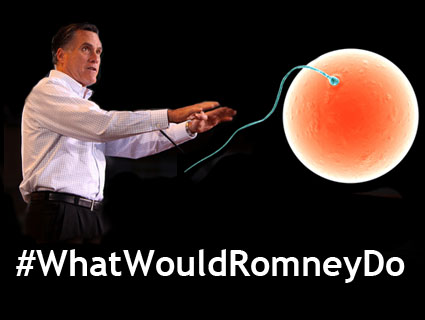 With Election Day now upon us, it’s worth weighing the impacts of a Mitt Romney win on reproductive rights and health care. In general, Romney seems likely to cater to the extreme anti-choice faction of his party. Here’s a sneak preview of possible scenarios:

1. The Supreme Court gets more anti-choice. All of the abortion-related decisions on the court in recent history have been a 5-4 (or 4-5) split, with Justice Anthony Kennedy as the swing vote. The court has four justices in their 70s right now, which means that the next president could have one or more opportunities to appoint new members. Romney has made it clear that he would like to see Roe v. Wade overturned, and would appoint federal judges and Supreme Court justices that feel that way, too. Even if those appointees don’t get to throw out Roe (at least, not right away), they could still make important decisions on state laws currently caught up in the court system, like laws requiring a sonogram before an abortion and other laws that ban abortions after 20 weeks. A Supreme Court ruling upholding those laws could set new precedents for the burdens states are allowed to impose on women seeking an abortion.

3. Health care reform gets overturned. Romney says he wants to toss out “Obamacare”—except for the parts that people like, such as making it illegal to deny coverage to someone because of a preexisting condition. The problem is, the parts Romney doesn’t like are required to make the other parts work. There are a lot of provisions in health care reform that are particularly helpful for women. For one, I’ve known women who were told that heavy periods or cramps qualified as a “pre-existing condition,” which the reform bill would outlaw. More broadly, under Obamacare, insurance companies can no longer charge you more just because you’re a woman—a practice known as “gender rating.” Birth control and other preventative care are now available without a co-payment. You can stay on your parents’ health care until you’re 26, which is particularly useful for women, who go to the doctor more often than men.

4. There’s no more co-pay-free birth control. Even if Romney doesn’t succeed in overturning health care reform, he has singled out the requirement that insurers cover contraception as an “assault on religion” that “will end” if he becomes president. Paul Ryan has promised that the birth control mandate “will be gone” on “day one” of their administration.

5. There are stricter limits on federal funding for abortions. Last year, GOP House members—including Paul Ryan—tried to pass a law that would have redefined rape as only including “forcible rape”—which would likely exclude statutory rape and possibly date/drugged/drunk rape. This is important, because federal laws dealing with the use of government funds for abortions have typically included exemptions for pregnancies resulting from rape or incest. The No Taxpayer Funding for Abortion Act also includes other new limits, like barring tax credits for employers who choose to offer a health plan that covers abortion and making it illegal to use your own tax-exempt health savings account to pay for an abortion.

6. The Global Gag Rule returns. Romney has said he will reinstate this rule, also known as the “Mexico City Policy,” that bars any US-funded organization working abroad not only from providing abortions, but from offering referrals or even discussing abortion as an option.

7. Parental consent laws are federalized. In 2005, 2007, and 2011, Paul Ryan cosponsored the Child Interstate Abortion Notification Act, a bill that would make it illegal to take a minor to another state to avoid parental notification and consent laws for an abortion in her home state. Under the bill, a minor’s parents must be notified in writing at least 24 hours before she can have an abortion.

8. Hospitals are allowed to deny women access to abortion, even if their lives are in danger. Under current law, any hospital accepting Medicare or Medicaid and affiliated with a religious institution that refuses to provide abortion care under any circumstance is legally required to transfer a woman who needs a live-saving abortion to a hospital that will. But last year, the House passed another bill that Ryan cosponsored, the Protect Life Act, which, if passed, would allow hospitals to refuse to “participate in” or “provide referrals” for abortions.