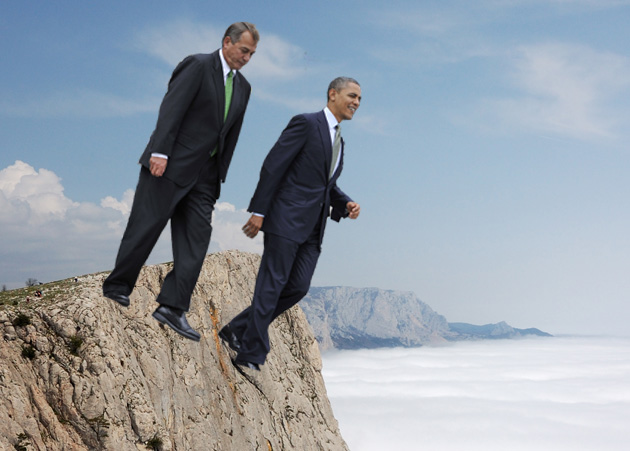 Where did this whole “fiscal cliff” metaphor come from, anyway?

It’s the handiwork of Fed chairman Ben Bernanke, the same guy who warned us about a “global savings glut” in 2005. In testimony before Congress earlier this year, he said that although it was a good idea to get deficits under control in the long term, it would be a bad idea to raise taxes and slash spending right away:

You also have to protect the recovery in the near term. Under current law, on January 1, 2013, there’s going to be a massive fiscal cliff of large spending cuts and tax increases. I hope that Congress will look at that and figure out ways to achieve the same long-run fiscal improvement without having it all happen at one date.

I didn’t realize Bernanke was such a colorful phrasemaker. So what’s the deal with January 1, 2013?

Remember the lame-duck session of Congress after the 2010 midterm elections? President Obama cut a deal with Congress that extended the Bush tax cuts, established several miscellaneous tax credits, put in place a payroll tax holiday, and extended unemployment benefits. However, all of these things expire on January 1, 2013. 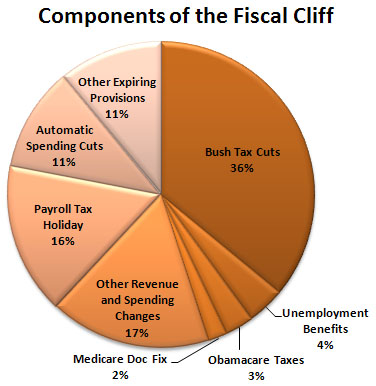 But that’s not all! Remember the debt ceiling fiasco in 2011? At the last second, President Obama cut a deal with Congress to raise the debt ceiling, but the price he paid was a big set of spending cuts that would automatically take effect unless Congress figured out a way to do something different. Congress failed, of course, which means all those spending cuts will happen on January 1, 2013. There are a few other items too, including some new Obamacare taxes that take effect, but this accounts for most of it.

So when you add it all up, what’s the price tag for this stuff?

That’s where things get a little tricky. The whole fiscal-cliff metaphor is specifically designed to sound super scary, but it’s really kind of misleading. Here are two different ways of looking at it:

You see? We’re not really going to fall off a cliff on January 1. The cumulative effect of all this stuff will be pretty small for the first few weeks. It’s only if it drags on forever that we really feel the hit.

Okay, so suppose it drags on forever. What effect would that have on the economy?

Not a good one. The Congressional Budget Office estimates that instead of growing modestly, the economy would shrink 0.5 percent in 2013 and unemployment would rise significantly. Technically, that would mean we’d be in recession for at least a few months of the year.

That all sounds very Keynesian.

Yes, it does. Ironic, isn’t it? Republicans try to avoid admitting this when they join in the doomsaying about the fiscal cliff, but the basic idea here is that a big drop in deficit spending would be bad for the economy while it’s still performing below potential.

Which part has the worst effect: the spending cuts or the tax increases? 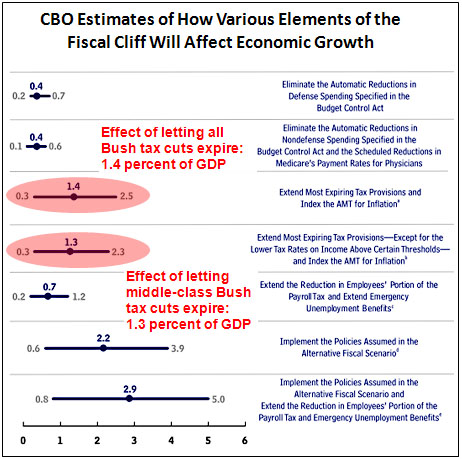 But wait a second. There are two parts to the Bush tax cuts: the middle-class cuts and the cuts for the rich.

Right. And here’s the thing: CBO figures that letting the middle-class tax cuts expire would shrink GDP about 1.3 percentage points.

But that’s almost the entire effect of letting the Bush tax cuts expire.

Right. And everyone agrees we should extend the middle-class tax cuts. So if we did that, but let the tax cuts on the rich expire, it would have virtually no impact on growth.

So that would make a ton of sense. Are we going to do that?

Good question! Republicans are dead set against it, so it’s going to be a big fight.

What about the payroll tax holiday?

Everyone seems willing to let that end, so that’s not really very controversial.

Why is that? It has a pretty big effect.

Beats me. It would make a lot more sense to extend the payroll tax holiday than to extend the Bush tax cuts for the rich, but Republicans are opposed to the tax holiday and Democrats have already caved in on this. Mostly it’s because they’re worried that extending it would set a precedent for keeping payroll taxes lower forever, and that would hurt Social Security’s finances.

Conversely, Republicans care a lot about tax cuts for the rich. At the moment, they claim they’ll kill any deal to avoid the fiscal cliff unless they get to keep them.

Yep. But they’re going to have a tough time sticking to this. Right now, because the Bush tax cuts are still in effect, the conversation is about letting them expire and thereby raising taxes. But on January 1, the Bush tax cuts disappear and everyone’s taxes automatically revert to the higher Clinton-era rates. At that point, the conversation changes: Suddenly we’ll be talking about cutting taxes on the middle class and maintaining them where they are now on the rich. And Obama can basically go on TV every single day and say that he’s ready to sign a middle-class tax cut any time, but Republicans are refusing to agree unless their rich pals also get a tax cut. Every poll ever taken shows that the public doesn’t want to give the rich a tax cut, and they’re going to be pretty pissed that the GOP is holding their tax cut hostage unless Donald Trump gets a tax cut too.

Is some kind of face-saving deal possible?

Oh, sure. Republicans want tax rates on the rich to stay at Bush levels, while Obama wants actual taxes paid by the rich to go up. It might be possible to square this circle by leaving rates at Bush levels but reducing deductions and closing loopholes on high earners. The math is a little tricky, but there might be a way to make a deal along these lines.

And what about the spending cuts?

There are two parts to this. Half the spending cuts are to defense and half are to domestic programs. Republicans don’t like the defense cuts and Democrats don’t like the domestic cuts. But there’s no telling what will happen here. It would make sense just to eliminate them all for now, and negotiate a different set of spending cuts to be phased in later, when the economy has improved. The problem is that a deal like this would basically be a “grand bargain”: a bunch of future spending cuts—including cuts to entitlement spending—plus some future tax increases, as a way of reining in the deficit. Obama tried to negotiate a deal like that back in 2011, but Republicans revolted because they refused to accept any future tax increases at all. This might change, but so far it’s not looking very likely.

So give me the nickel summary.

You bet. Here it is:

Wait a second! Did you forget about the debt ceiling?

Of course not. The debt ceiling will need to be raised early next year, and Republicans are keen to play games with it, just like they did in 2011. However, an agreement to raise the debt ceiling will almost certainly be part of the negotiations surrounding the fiscal cliff. It adds a little frisson of danger to the whole thing, but not much else.