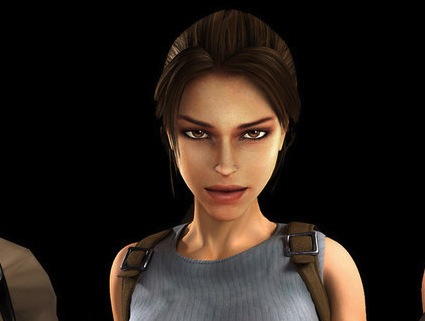 Update: The folks at Kotaku rounded up the best of #1reasontobe, notes from women in gaming on why they put up with this crap. “Because writers from other mediums treat me like I’ve come from Narnia,” says award-winning video game writer Rhianna Pratchett, “full of wisdom and insight about a strange new land.” Go check it out.

Thousands of women working in the video game industry are coming forward with stories of vicious sexism they’ve faced on the job. The Twitter hashtag #1reasonwhy sprang up overnight seemingly in response to Luke Crane, a fantasy role-playing gamer, who asked, “Why are there so few lady game creators?”

What about brogrammers? Read about sexism in Silicon Valley.

It’s a good question: While women make up 47 percent of the gaming audience, a 2005 study (the most recent comprehensive survey) revealed that more than 88 percent of the industry’s employees are male. Female game devs—and their male supporters—have some theories. To wit:

Because I was told I’d be remembered not on my own merits, but by who I was or was assumed to be sleeping with. #1reasonwhy

Because conventions, where designers are celebrated, are unsafe places for me. Really. I’ve been groped. #1reasonwhy

#1reasonwhy Once heard an Art manager say ‘We don’t need any more women, they’re more trouble than they’re worth’ as he viewed applications

I’ve had prominent designers compliment my games, while complimenting my wife’s appearance, when we develop together. #1reasonwhy

Because the folks in marketing don’t bother doing their jobs when the video game stars a lady bit.ly/U0duoy #1reasonwhy

Because when we hired a female engineer at my company, I was skeptical. She’s talented and awesome. I’m part of the problem. #1ReasonWhy

There are stories of being mistaken for a “real” developer’s girlfriend at conferences, getting passed over by mentors in favor of male colleagues with less talent, and the tedium of working on female game characters who exist to wear sexy outfits and sleep with the badass male hero. Romana Ramzan claimed she was told that a networking event during the Game Developers Conference would be “a good place for a woman to pick up a husband.”

And then there’s the cold, hard question of compensation: According to an annual salary survey of about 4,000 gaming professionals by Game Developer magazine, female animators made $26,000 less than their male counterparts in 2011, on average—female programmers ($83,333) made about 10 grand less then male ones ($93,263).

Naturally, the sexist backlash to the sexism complaints wasn’t far behind. Kotaku, Gawker Media’s video game blog, posted some of the #1reasonwhy tweets, and the clueless-comment haterade began to flow: 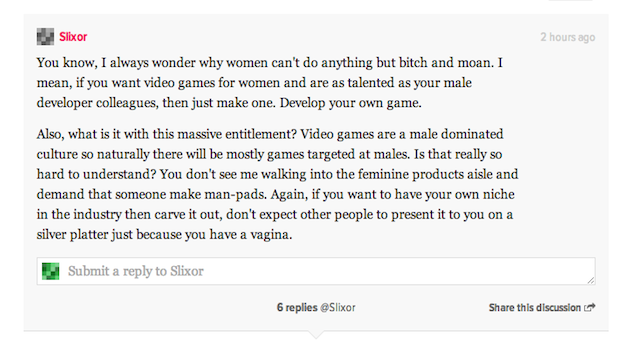 Dillon Paradis, a “game creator in the making,” according to his Twitter bio, had this to share:

I look at #1ReasonWhy and I laugh at all the feminists who think they matter. If you were good in your field, you wouldn’t be misrepresented

Obvious trolling aside, #1reasonwhy posters of both genders have done an admirable job of calling out how sexism makes it harder—and sometimes impossible—for women gamers to make games that they would want to play. A number of female engineers and artists noted that simply joining in on the hashtag and tweeting about the problem felt like a risky career move. But woman-repelling workplaces aren’t just bad for the game industry’s female employees; they are bad business, too. While the industry continues to cater to the supposed interests of teenage boys, those boys make up just 18 percent of the game-playing crowd—30 percent of gamers are adult women, according to the Entertainment Software Association, and they are the industry’s fastest-growing demographic.

Nintendo has had massive success over the last few years by attracting new female gamers through casual “crossover” titles like Wii Play and Wii Fit, but to my mind it’s a costly mistake to think the lady gaming audience is only interested in nonnarrative family-oriented games. As a teenage PC gamer in the mid-’90s, I got my parents to part with hundreds of dollars for brilliant LucasArts (yes, that Lucas) titles like Grim Fandango, Sam and Max, and Day of the Tentacle. These were sharp, literate games with tons of narrative appeal, unconventional quests, and a few really great, hilarious, non-ditzy female characters. (While none of these games were huge commercial successes, I’m not the only one who thinks they’d have been better served by the graphics capabilities of modern consoles.)

By the time I was in college, the dude-ification of the gaming industry felt rampant and repellent.

From a span of several years, when LucasFilms Games was in its prime, my parents were spending more on these decidedly unmacho titles as they were on the shooter games my two little brothers also liked. If a Grim Fandango-style game came out today with an awesome female character at the helm, I would go gaga, buy several copies as gifts, and tweet of nothing else for three months. As it stands, I haven’t purchased a new game in years.

There may be good stuff out there that I’m missing, but the nondudely LucasFilms titles seemed like a brief oasis, and by the time I was in college, the dude-ification of the gaming industry felt rampant and repellent. I haven’t bought a new title in years, but from the looks of their posts, some of these #1reasonwhy tweeters want to make games that I’d want to buy. Godspeed!