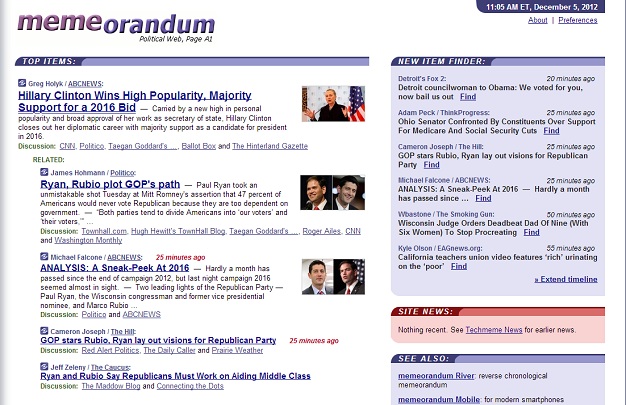 The political media is at it again, attempting to convince the general public that the just-finished 2012 presidential election was little more than the first course in a much longer and more grueling meal.

Scanning the top headlines at political punditry aggregator Memeorandum, you might hazard a guess or two about the state of politics this post-election season.

First, you might surmise that all this talk of Hillary Clinton being at the top of the 2016 food chain and the repetition of the names “Rubio” and “Ryan” adjacent to one another in headline after headline, indicates that the media is already circling the wagons around their favorite candidates.

Second, you might guess that this means there’s a deficit of current news to keep the fires burning.

Unfortunately, that second point is only half true. The world is full of important stories just begging to be covered: the escalation of violence in Syria; the horrifying “Kill the Gays” bill in Uganda and its roots in American evangelical funding; the endless War on Drugs and militarization of the police and the very real violence it sustains; the list goes on and on. And yes, they’re being covered, but it feels at times like the least important news always rises to the surface.

Politics is so often about distraction. We talk about the “fiscal cliff” using imagistic and misleading language that obfuscates the real issues with our national debt, such as our dangerous sustained level of defense spending, and creates a sense of fear around something that in no way represents any sort of actual cliff.

This is a monster of our own creation. 24 hour cable news, the blogosphere, social media…is it any wonder the 2016 election has already begun? Political news is like a shark. It can never stop swimming, even to sleep.

I’m guilty of this, of course. I implicate myself in this wide, wide net of trivia and pettiness. But surely we can do better? Surely we can, at the very least, put a moratorium on 2016 election predictions, or fawning over the handsome, charming specter of a Rubio/Ryan ticket? Perhaps we can let Hillary Clinton fade into some temporary obscurity at least until, say, 2014.

Let’s not allow the next presidential race to become a five-year engagement.