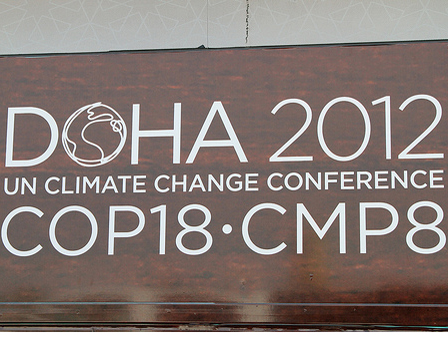 The United Nations talks in Doha weren’t expected to produce much progress In addressing climate change. But the negotiations, which concluded Saturday, failed to meet even the low expectations that had been set for the negotiations.

Talks dragged into the evening (Doha time), as parties were still deadlocked on key points like extending the Kyoto Protocol, the emission-cutting treaty adopted 15 years ago that is poised to expire at the end of the 2012, and how to raise the $100 billion in funds to address climate change promised to developing countries. But negotiators ultimately emerged with what they’re calling the “Doha Climate Gateway” (they seem to get more creative with these titles every year). Here’s what it entails, as Reuters reports:

A package of decisions, known as the Doha Climate Gateway, would also postpone until 2013 a dispute over demands from developing nations for more cash to help them cope with global warming.

The draft deal would extend the Kyoto Protocol for eight years. It had obliged about 35 industrialized nations to cut greenhouse gas emissions by an average of at least 5.2 percent below 1990 levels during the period from 2008 to 2012.

Preserving the Kyoto Protocol in a second commitment period (or KP2, as it is sometimes called) is a big deal, since Kyoto is the only legally binding global climate agreement we have. While the US and other major emitters like India and China are not parties to that treaty, it’s something. This is especially important, since at last year’s talks neogiators determined that they would not negotiate a new, legally binding treaty that includes the US and China until 2015, and that new treaty won’t take effect until 2020. Brazilian Minister of Environment Izabella Teixeira summed up the outcome pretty well in her statement to the plenary session Saturday night:

We are not fully satisfied with the outcome achieved. We wanted more. We believe more is needed. But we also believe that a Conference that ensured KP2 is, by definition, a success.

But as you can imagine, small island nations and other vulnerable countries aren’t exactly calling Doha a “success,” given that waiting around a few more years could prove hazardous to their survival. Here’s a statement from Nauru’s Foreign Minister Kieren Keke, who serves as the chair of the Alliance of Small Island States:

This is not where we wanted to be at the end of the meeting, I assure you. It certainly isn’t where we need to be in order to prevent islands from going under and other unimaginable impacts.

The biggest concern – and not just for small islands mind you – is the failure to deliver the mitigation ambition the scientific community says is essential to keep global warming from exceeding 2 degrees Celsius, to say nothing of 1.5 degrees, and the cascade of catastrophes that would follow.

Reactions are coming in from American and international NGOs that have been following the process in Doha. Here’s Jennifer Haverkamp, the director of the international climate program at the Environmental Defense Fund, pointing out that after 18 years of meetings about how to mitigate climate change, we’re now dealing with the fact that the changes are already here:

This is the next step in the UN’s increasingly reactive response to climate change. First the focus was on avoiding emissions. When mitigation efforts proved inadequate, it turned more attention to adaptation. Now, as the effects of extreme weather and rising oceans hit communities from the Philippines to New Jersey, the UN has realized it must begin to grapple with the damaging effects of climate change it had been mostly trying to avoid.

And here’s a statement from Kumi Naidoo, executive director of Greenpeace International:

Today we ask the politicians in Doha: Which planet are you on? Clearly not the planet where people are dying from storms, floods and droughts. Nor the planet where renewable energy is growing rapidly and increasing constraints are being placed on the use of dirty fuels such as coal. The talks in Doha were always going to be a modest affair, but they failed to live up to even the historically low expectations.