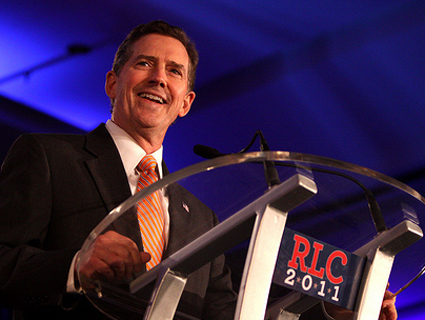 DeMint wasn’t running for president. Soon, however, he will be running the Heritage Foundation, the most influential and partisan of Washington’s conservative think tanks. Heritage isn’t exactly known for the integrity of its policy shop these days—they produced a magic beans jobs prediction to back Rep. Paul Ryan’s (R-Wisc.) budget plan and a laughably bad analysis of the new START treaty—but they’ve been very successful at helping to enforce ideological discipline within the GOP. DeMint, who spent years orchestrating primary challenges against Republican squishes and blocking potential compromises, seems suited to the gig. Despite the GOP distancing itself from Romney, with DeMint running Heritage, Washington’s leading conservative think tanks are now all lead by people who think Mitt Romney’s remarks writing off half the country as hopeless parasites are basically correct.

Nevermind that Romney was actually wrong: The largest share of the 47 percent he referred to as not paying federal income taxes are people who pay payroll taxes, while the remainder are retired people who have paid taxes all their lives and people who make less than $20,000 a year, which despite what you may have read at Heritage is not an easy way to live. DeMint’s move to Heritage shows that conservatives aren’t really interested in reevaluating this worldview, despite what you may have heard about Republican “soul-searching.”

After all, most of the think-tank leadership buys into it. The libertarian Cato Institute, by far the most intellectually diverse of these right-leaning DC institutions, settled on former BB&T CEO John Allison, a self-identified objectivist, to lead the organization after a bitter internal battle. In case you’ve been frozen in carbonite for a while and missed tea partiers holding signs praising John Galt, objectivism is the philosophy of Ayn Rand, whose vision of heroic entrepreneurs held back by a the needs of a parasitic underclass that contributes nothing to society sounds a lot like the America Romney described in Boca Raton. The New York Times reported shortly after Romney’s 47 percent remarks that his “thinking on the matter has been shaped in part by Arthur C. Brooks,” who is president of the American Enterprise Institute and who at CPAC in February called for a government that will “reward the makers, not the takers.”

Whatever impact the 47 percent tape had on Romney’s political fortunes, it’s hard to argue that he wasn’t channeling his party. DeMint’s  move to Heritage shows conservatives believe that all this message needs is more strident and unambivalent defenders.