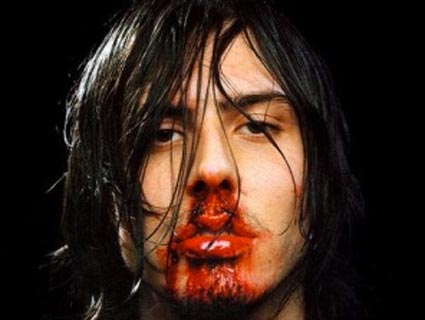 If you have a passing familiarity with rocker philosopher Andrew W.K., this is probably what you see: A guy with long hair in a uniform of scrubby white jeans who has a penchant for puking and bleeding regularly. If you’re into the deeper W.K. cuts, you’ll know that his appearance belies a quest to spread his message of relentless existential positivity (a.k.a PARTYING) far and wide. Last week, though, W.K. surprised many with the announcement that the State Department was sending him to Bahrain as a cultural ambassador.

One problem: The State Department claimed otherwise (as reported here by MoJo‘s Asawin Suebseang). And while W.K. now says US officials cancelled on him last minute, that doesn’t mean he’s ready to quit. We caught up this past week with W.K., who insists he’s still looking to get to Bahrain on his own—and isn’t taking the State Department’s snub too personally.

Mother Jones: What would your Bahraini itinerary have looked like if the trip weren’t called off?

Andrew W.K.: They just wrote to me and my manager back in September of 2011, so over a year ago, and the itinerary was a variety of activities. Instead of just going to play a concert, this was a trip that revolved around interacting with the people of Bahrain. I was going to the university in the capital city. I was going to an elementary school. I was going to music stores where musicians practice. So it really was a cultural trip more than a concert. I had never been to the Middle East before, so it was going to be my first trip to this area of the world. And I was so excited that my first trip there would be under the auspices of the US government, representing our government in a dignified and formal way.

MJ: How did the original trip come about? The State Department said it had come from a request within Bahrain.

“This was a US invitation. It wasn’t Bahrain in the end that cancelled it.”

AWK: In my opinion those comments were made by someone or on behalf of someone who had very little familiarity with the situation. We were never told anyone in Bahrain asked for this to happen directly. The subject of the email quite literally read, “State Department scheduled to bring Andrew W.K. to Bahrain for motivational speech.” I would love to know these things. This was a US invitation. It wasn’t Bahrain in the end that cancelled it.

MJ: How were you planning on dealing with cultural sensitivities that might conflict with your emphasis on partying?

AWK: As much as I always would. My goal is never to offend anyone, per se. My goal is to promote partying and empathetic feelings to human beings. Obviously someone was offended here in the US and cancelled my whole trip. Just the idea of me was offensive to someone here. As I understood, people in Bahrain are open-minded. And we’ve had a lot of outreach from citizens from Bahrain.

MJ: If you had to explain what partying means to someone who is unfamiliar with your work and has maybe only seen you via the album cover where you have blood on your face, what would you say?

“I think it’s very telling that someone would cancel this trip on the way I look or the way my music sounds.”

AWK: I’m celebrating being alive. And that is quite simply what this is all focused on. And we are lucky to have the chance to be alive and we want to live this life to the fullest, that is what partying is to me. And I think it’s very telling that someone would cancel this trip on the way I look or the way my music sounds—that they would even frown upon the idea of celebration, which is one of the common experiences shared by all people no matter where you are in the world. And especially in the United States of America, which is a place full of opportunity and openness and freedom to pursue what makes you feel good and what makes you excited. I’m very thankful to be American—and to represent this country was very exciting in that regard. I feel very let down by the country I was born in.

AWK: No, I was hoping to meet some while I was there. I was going to jam, hang out with musicians, so I still look forward to that and I still want to go. Otherwise, my heart is open. I’m not taking this personally. For all I know the State Department changed its mind to protect my safety, or some other reason. And I certainly thought about and learned more about the Middle East because of this, even though I never went. That’s the point of a cultural ambassador—to create a dialogue, and I think we accomplished that.