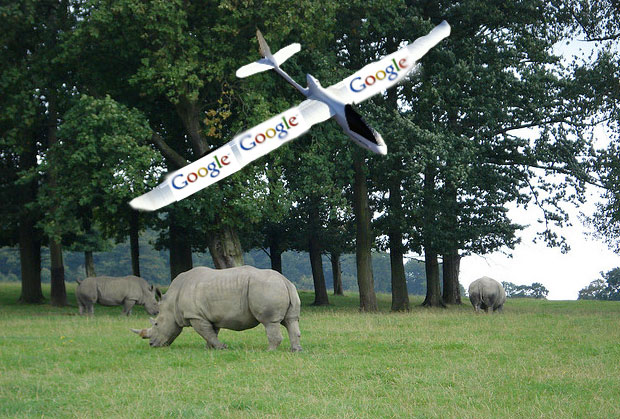 First things first: No, the World Wildlife Fund (WWF) is not using drones to vaporize poachers. But thanks to a five million dollar grant awarded by Google on Tuesday, the organization is expanding its use of unmanned aerial vehicles to track and deter criminals who illegally hunt endangered animal species around the world.

WWF spokesman Lee Poston is not calling these vehicles drones, because he doesn’t want people to confuse them with the military kind. According to Poston, they are “sophisticated radio-controlled devices like hobbyists use” that can be “controlled from your iPad or other device.” But the WWF website does call them “conservation drones.”

Prior to receiving the Google grant, the WWF had already deployed trackers in Nepal’s national parks. These drones are light enough to be launched by hand and can be programmed to fly about 18 miles at a maximum elevation of 650 feet, for almost an hour. The cameras on the drones allow rangers on the ground to spot would-be poachers, especially in hard-to-reach places.

The Google funding will enable WWF to expand its drone program in Asia and Africa to protect rhinos, which are hunted for their horns; elephants, which are pursued for their tusks, and tigers, which are killed for everything from their eyes to their reproductive organs. The grant will also be used to advance wildlife tagging technology, specialized sensors, and ranger monitoring software.

The anti-poachers are exploring other high-tech measures as well. “We are looking into how to track animal parts using things like DNA,” says Poston. “So if a ranger find a rhino horn on the ground, we can figure out what happened.”

The grant is part of Google’s flagship Global Impact Award program, which this year, is providing a total of $23 million in funding to nonprofits addressing various challenges through technology and innovation. Some of the other organizations that received awards on Tuesday included the Geena Davis Institute on Gender and Media (which recently put out a study on why women have fewer speaking parts than men) and charity: water, which increases water access in developing countries through technology.

This grant “is going to have a huge impact,” says Ian Morrison, another WWF spokesman. “The poachers and the crime syndicates that fund them are getting more and more sophisticated, and it’s time for us to step up our game too, and level the playing field.”

Note: This image is not an actual Google-funded drone.