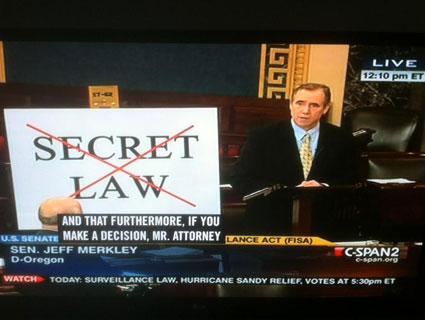 There’s nothing like a debate over warrantless wiretapping to clarify how the two parties really feel about government. On Friday, the Senate voted to reauthorize the government’s warrantless surveillance program, with hawkish Democrats joining with Republicans to block every effort to curtail the government’s sweeping spying powers.

As the Senate debated the renewal of the government’s warrantless wiretapping powers on Thursday, Republicans who have accused President Barack Obama of covering up his involvement in the death of an American ambassador urged that his administration be given sweeping spying powers. Democrats who accused George W. Bush of shredding the Constitution with warrantless wiretapping four years ago sung a different tune this week, with the administration itself quietly urging passage of the surveillance bill with no changes, and Senator Dianne Feinstein (D-Calif.) accusing her Democratic colleagues of not understanding the threat of terrorism.

“There is a view by some that this country no longer needs to fear an attack,” Feinstein said.

So what were these drastic changes sought by Feinstein’s colleagues that would leave the United States open to annihilation by terrorists? They’re mostly attempts to find out exactly how the changes to the Foreign Intelligence Surveillance Act actually work in practice. The most radical proposal, Senator Rand Paul’s (R-Ky.) amendment requiring a warrant for the government to access any digital communications, had no chance of passing but clarified just how moderate the Democrats’ proposals were by comparison.

“It’s incredibly disappointing that such modest amendments that would have done nothing more than increase transparency and accountability failed to pass in the Senate,” said Michelle Richardson of the ACLU.

The Foreign Intelligence Surveillance Act is meant to allow the government to spy on suspected foreign agents abroad, but it is written in such a manner that it allows the government to snoop on conversations involving American citizens, as long as at least one end of the conversation involves a suspected agent of a foreign group overseas. But very few lawmakers know how the law works, or even have the staff with the necessary expertise or security clearances to figure out how it works. So when respected legislators like Feinstein take to the Senate floor to say that any changes would lead to more flaming buildings and American corpses, senators take it seriously. What this means, however, is that Congress just voted to approve a largely secret law it doesn’t really understand. In the Senate, they actually voted not to know what the law does by rejecting an amendent that would have made the government state how many Americans have been spied on without a warrant.

“Americans have no way of figuring out how their laws are being interpreted,” Senator Ron Wyden (D-Ore.) said. “We don’t expect the public to, in effect, just accept secret law.”

Wyden proposed that the National Security Agency disclose an estimate of how often these powers have targeted Americans, and that if data on Americans were collected, the authorities seek a warrant before searching for their private information in NSA databases. “I guess you believe that no one is going to attack us, then it’s fine to do this,” Feinstein said. “I know there are people trying to attack this country all the time.”

Senator Chuck Grassley (R-Iowa) was more direct, arguing that the Fourth Amendment only protects Americans if they’re being targeted, not if the government just happens to be listening in. “Some people think that a U.S. person has a constitutional right not to have his communications with a foreign target eavesdropped by the U.S. government without a warrant,” Grassley said. “But that’s not how the Fourth Amendment works.” Grassley is afraid Obamacare will pull the plug on your grandma, but he doesn’t have any worries that the government might abuse its power to spy on Americans without a warrant.

Wyden’s colleague Senator Jeff Merkley (D-Ore.) wanted to force the government to issue declassified summaries of decisions made by the Foreign Intelligence Surveillance Court, which not only approves secret warrants but issues rulings interpreting the breadth of the law. Court interpretation can significantly change the scope of a law that seems plainly written. Nevertheless, when Merkley argued that Americans shouldn’t be subject to laws they don’t understand, Feinstein mocked him by holding up a copy of the FISA law and saying “this is the law. It’s not secret.”

Senator Patrick Leahy (D-Vt.) sought to make the warrantless surveillance law expire a year prior to end of Obama’s second term, instead of five years from now. It was voted down, precisely because supporters of warrantless spying understand that the longer Congress goes without debating the law, the more normal these extraordinary powers become. Feinstein explained that she opposed Leahy’s measure because “these authorities expire in 4 days.” But the bill has been ready for a Senate vote since September—Wyden had been holding it up in order to get floor votes on the minor oversight amendments the Senate just crushed.

Feinstein and her Republican allies insist that the oversight of warrantless surveillance is sufficient, which is why something as basic as disclosing how many Americans have been spied on is unnecessary. As Julian Sanchez of the Cato Institute points out, their argument relies on a catch-22: If there’s no evidence of the government abusing its authority, that must mean it never happens. Therefore, there’s no need for more oversight. If there is evidence of government abusing its authority, that also proves there’s no need for more oversight—after all, the abuses were noticed.

As the debate dragged on, however, Feinstein, growing ever more frustrated, seemed to be arguing not that the government had never abused its surveillance authority but that further disclosure could lead to the abolition of the warrantless surveillance program.

“This is an effort to make that material public, and I think it’s a mistake at this particular time because it will chill the program, it will make us less secure, not more secure,” Feinstein said. “I know where this goes, it goes to destroy the program. I don’t want to see it destroyed.”

But if the program is constitutional, and the oversight is effective, what is there to be afraid of?