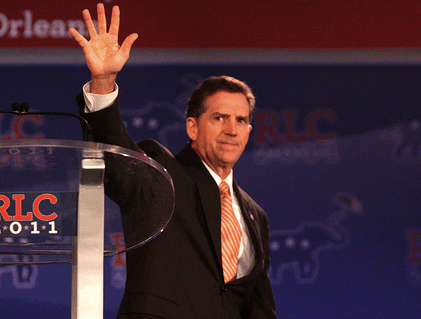 The Wall Street Journal broke the news Thursday morning that 61-year-old Sen. Jim DeMint (R-S.C.) is leaving the Senate to run the Heritage Foundation, a conservative think tank. DeMint could be giving up his Senate post as early as January, leaving South Carolina Republican Gov. Nikki Haley to appoint someone to fill out his term (cough, Stephen Colbert, cough).

In a Senate packed with off-the-wall conservative lawmakers, DeMint managed to stand out, always promising to top the craziness with…more crazy. As we bid DeMint a fond farewell, let’s relive his greatest moments:

According to the Spartanburg Herald-Journal, DeMint said this at a South Carolina rally: “If someone is openly homosexual, they shouldn’t be teaching in the classroom and he holds the same position on an unmarried woman who’s sleeping with her boyfriend—she shouldn’t be in the classroom.”

On a radio show in 2011, DeMint said: “I’ve said it often and I believe it—the bigger government gets, the smaller God gets. As people become more dependent on government, less dependent on God.”

In 2011, DeMint put an amendment into a totally unrelated spending bill that attempted to ban discussion of abortion via satellite, video-conferencing, and the internet (in other words, fully preventing women from speaking with their doctors remotely).

“Probably the most heart-wrenching experiences I’ve had over the last several days is when naturalized American citizens who have immigrated here from Germany, Iran, and other countries, they come up to me and they say why are we doing what so many have fled from?” DeMint told a conservative radio host in 2009 “Why don’t Americans see what we’re doing?”

In 2010, a proposed bill would have allowed a private group to buy property on Independence Avenue to build a women’s history museum (without costing taxpayers any money). DeMint was one of the bill’s chief opponents, and put a hold on it.

“On my way over, I was reading another story about a distant place where thugs had put 400,000 children out in the streets. And then I realized that was a story about the Chicago teachers strike,” DeMint said at the 2012 Values Voters summit in September. “But we’ve got to think of good things.”

On Fox News in 2011, DeMint said the government was “going to charge taxes on Christmas trees so they can start another government agency to promote Christmas trees. We don’t need to do that at the federal level. We can’t even afford to do what we’re already doing. And to add another tax to something and say we’re going to create a promotion agency, it just makes you want to pull your hair out.“

This statement was in response to a division of the Department of Agriculture proposing that tree importers and producers pay 15 cents per tree, to fund a promotional campaign for Christmas. (The tax was tabled.)