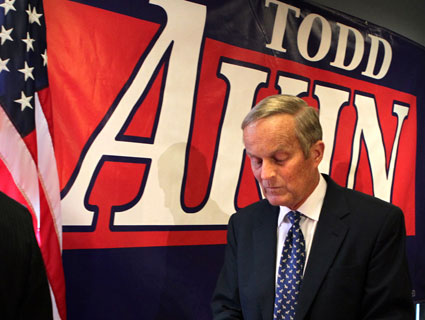 Rep. Todd Akin, the Missouri Republican who scuttled the GOP’s chances of winning the Senate with his remark about “legitimate rape,” and who predicted that same-sex marriage would lead to the collapse of civilization, has one last task before leaving the House: undercutting the repeal of Don’t Ask, Don’t Tell.

In May, the House approved a version of the 2013 National Defense Authorization Act that includes a religious “conscience clause” authored by Akin. The measure purported to protect the religious liberties of service members by preventing them from being punished on the basis of their religious beliefs “concerning the appropriate and inappropriate expression of human sexuality.” The provision is broad, and LGBT rights supporters fear it would permit discrimination against gay and lesbian service members. Under Akin’s proposal, a service member could cite his or her religious beliefs on homosexuality for refusing to serve alongside gay and lesbian colleagues, or for treating them differently from everyone else. For example, a service member could object to being housed in the same facility as someone who is gay or lesbian. Akin says this provision is necessary to prevent service members from “being persecuted for their views,” but the language could allow the persecution of service members on the basis of their sexual orientation.

“It carves out a set of special rights for those who would want to discriminate against people on the basis of sexual orientation,” says Allyson Robinson, an Army veteran and executive director of the LGBT rights group Outserve-Service Members Legal Defense Network. “What this language does is make it less clear to that unit commander on the ground how they should implement Don’t Ask, Don’t Tell repeal.”

The White House released a statement noting that Akin’s provision, and another measure banning the use of military facilities for ceremonies celebrating same-sex unions, could be “harmful to good order and discipline.”

The Senate passed a version of the 2013 defense spending bill without the Akin proposal in early December. But with both houses of Congress negotiating the final version of the bill, the two main Republican negotiators, Sen. John McCain (R-Ariz.) and Rep. Howard “Buck” McKeon (R-Calif.), want Akin’s so-called “conscience clause” to remain in the bill.

“They’re pushing pretty hard,” said a House Democratic aide familiar with the negotiations. McCain and McKeon were both fierce opponents of allowing gay and lesbian service members to serve openly. McKeon, who donated to the Proposition 8 campaign that banned same-sex marriage in California, previously threatened to scuttle a defense bill unless it contained language banning military chaplains from performing same-sex ceremonies even if they were willing to. LGBT rights supporters view the GOP’s new hard line on the Akin language as a surprise. “Despite a totally open amendment process in which more than 100 amendments were approved, no senator offered a similar amendment to the Akin language,” says Ian Thompson of the American Civil Liberties Union.

The negotiations could be resolved as early as Tuesday evening.

During the debate over repealing Don’t Ask, Don’t Tell, Republicans and other opponents of the move warned that getting rid of the policy would be harmful to unit readiness and cohesion, and would harm morale. Since repeal was enacted in September 2011, however, both the Defense Department itself and outside studies have found little evidence that ending Don’t Ask, Don’t Tell had any negative consequences at all. “My view is that the military has kind of moved beyond it,” Defense Secretary Leon Panetta told reporters in May. And LGBT rights activists now contend that the Akin provision—should it become law—could cause chaos in the military.