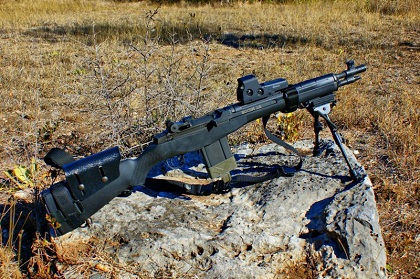 The SOCOM 16 is a civilian version of the M14 assault rifle. It has the shortest permissible barrel for civilian use under NFA guidelines.Wikipedia

As we wade deeper into the guns debate, one thing is becoming abundantly clear: This issue is just as much a part of the never-ending culture wars as gay marriage and abortion.

I’ve written in the past about the language of politics, and specifically the language of conservative (or “reactionary”) politics. People on the right and the left tend to use different language to present and enforce their ideas about the world and society, and this can create something of a barrier between liberals and conservatives. For instance, the president is often referred to by members of the far-right as a “socialist” while many members of the far-left refer to him just as disparagingly as a “neo-liberal.” You could just as easily find more libertarian types calling the president a “statist” while died-in-the-wool socialists might refer to him as a “capitalist.” Yes, he can be all these things at once, and yet none of them helps us understand his actual politics.

Obviously definitions vary wildly depending on one’s point of view. Language is simply another currency of power, and every party to a political fight seeks to exploit language in order to advance their cause. The gun debate is no exception.

Two of the most loaded terms in this debate are “assault weapon” and “gun control.” Assault weapon has a very frightening sound to it, especially for people who don’t own or understand much about guns. Gun control is similarly alarming for pro-second amendment activists, and certainly groups like the NRA utilize the term (and other more extreme language) to fan fears.

“Assault weapon” evokes images of machine guns firing off dozens of rounds each second, the sort of military weapons people are accustomed to seeing in violent films and video games. “Gun control” inspires people to line up at gun retailers to purchase as many weapons as possible before the government comes and takes them all away.

Neither of these assumptions is correct, and both serve to muddy the waters of debate. So let’s take a look at some of the current misconceptions surrounding guns and gun control, and try to have, for lack of a better phrase, a fair and balanced discussion of the issues. Full disclosure: I’m not a gun owner, and have never liked guns, and if I had a magic wand I’d erase them from the planet. But since I live in the real world, in which magic wands are regulated far more heavily than AK-47s, I’ll be happy with more practical solutions.

What exactly is an assault weapon anyway?
Many people believe that any weapon that resembles a military-style rifle qualifies as an “assault rifle.” However, most privately owned “assault weapons” are actually semi-automatic rifles with cosmetic enhancements designed to make them look like military weapons. They function no differently than a standard semi-automatic rifle, meaning that for each bullet fired one must pull the trigger. A fully automatic rifle, on the other hand, fires off multiple rounds simply by holding the trigger down.

It’s not illegal to own a fully automatic rifle in the United States. These are Class 3 weapons under the National Firearms Act, which are strictly regulated and also include short-barreled rifles; kits used to modify guns into fully automatic weapons; silencers; individual parts of machine guns; short-barreled shotguns; “destructive devices” such as molotov cocktails; and many other weapons.

Machine guns are unique in this bunch, however, as they have even tighter regulations than the rest. No machine gun manufactured after 1986 can be sold outside of police and military use, so only older models are on the market. This has led over time to greatly increased prices; most now cost many thousands or even tens of thousands of dollars. Very few machine guns are bought and sold privately, and very few are in private hands. Most are owned by collectors with very deep pockets.

Meanwhile, all sales of Class 3 weapons in America are regulated by the ATF, meaning that even private transfers have to go through official channels, unlike the sales of other weapons.

What is the “gun show loophole?”
This is another phrase that many people are unclear about. For one thing, the phrase itself makes it sound as though people can go to gun shows and purchase weapons from dealers there without any sort of background check. This is not accurate. Licensed vendors at gun shows are regulated in the same way as brick-and-mortar retailers, and their customers must undergo the same background checks they would at any store in America.

The real loophole is the peer-to-peer loophole. Individuals can buy and sell guns with no background check at all. This means that individuals can bring their own guns to gun shows and sell them to other individuals with no regulations in place. They could do this just as easily elsewhere, but gun shows are natural congregations of buyers and sellers. Some studies estimate [pdf] that 40 percent of guns in America are sold (or transferred) via peer-to-peer transactions, either at gun shows, via inheritence, etc. And, of course, sometimes peer-to-peer sales occur on the black market as well, with Class 3 weapons sold illegally.

Does “gun control” mean a ban on guns or that the government will come take your guns away?
Gun control is probably not a useful phrase when discussing, well, gun control. Nobody, least of all Americans, likes the thought of being “controlled,” especially where constitutional rights are concerned.

A better phrase might be “firearm regulations” of which we already have many, including the much more strict regulations on the sale and ownership of Class 3 weapons. Firearm regulations are important for public safety, law enforcement, and to protect responsible gun owners and non-owners alike.

For instance, the prohibitions against owning Class 3 weapons and the paperwork, fees, taxes, and other hoops associated with owning, selling, or manufacturing these weapons have resulted in far fewer fully automatic machine guns in circulation. It also means that the likely owners of these weapons will be responsible collectors rather than criminals or disturbed teenagers.

So then what should we do?
The question becomes, what sort of reasonable regulations can be applied to the nation’s vast private arsenal that would help prevent more incidents in the future?

Banning “assault weapons” is probably unhelpful at this point, since the impact of such a ban would largely be cosmetic. Banning high-capacity magazines might make more sense, but as many gun owners have told me, anyone trained with a gun can change out magazines quickly enough regardless of their capacity. Still, this is a fairly non-intrusive regulation which could have some effect at least at the margins. What are some other regulations or incentives that could improve public firearm safety and possibly reduce the number of gun deaths in this country?

For responsible gun owners this should not be a problem. Only a distaste of any and all gun laws would cause someone to question such a harmless regulation. Black market sales would still occur, but it would be less likely for certain unstable individuals to acquire weapons this way, and every little bit helps.

2) Use incentives to encourage responsible gun ownership.
Incentivizing safe gun ownership practices could also have positive long-term effects. Some countries, such as Canada, have gun storage laws that require guns and ammunition to be stored in separate places and place the responsibility of access to these safes on the owners themselves. That might be difficult to enforce in America. However, making gun owners liable for their gun storage after the fact could provide a negative incentive toward poor storage practices. Positive incentives, such as tax breaks for gun safes, could also be implemented to encourage the safe and responsible storage of guns.

This might help prevent young people from accessing their parents’ weapons, which not only leads to some mass shootings, but also to accidental deaths which are statistically more problematic.

Mandatory safety courses might also help in this regard.

Mind you, these are very broad prescriptions. The president has devised a much more detailed list of ideas (both for executive action and congressional approval) all of which are more sensible than placing armed guards at schools, even if not each proposal will necessarily be effective (such as a ban on the aforementioned “assault weapons.”) Proposals such as better training for first responders, closing the private sales loophole, and increasing mental health funding, however, are all excellent ideas that Congress should pass. A review of certain weapons not covered by the NFA’s Class 3 restrictions might also be worth undertaking.

None of the broad ideas listed above, if implemented, would deter responsible gun owners from owning firearms. Meanwhile, they would encourage responsible ownership while discouraging irresponsible or dangerous people from unsafe practices or possession of deadly weapons in the first place. On the other hand, none of these regulations would necessarily stop a determined mass shooter. The problem with mass shootings is that they are hard to predict, difficult to stop, and very easy to comment on in hindsight. Maybe no regulation will stop them, but it can’t hurt to implement solutions that might help diminish them.

Where is the debate headed?
Hopefully both parties in Congress can work together to implement a compromise that is effective and sensible rather than simply shutting down the debate before it’s begun, something that at least some House Republicans appear determined to do, with several already calling for impeachment over Obama’s executive actions.

As the debate rages on, confusion over definitions will likely only grow more intense. With the nation’s leading gun lobby refusing to do anything other than rile up its base, it will take less politicized gun owners to help drive the conversation toward something at least resembling a productive discussion. Extremism will get us nowhere, and that’s an unacceptable outcome when there are lives at stake.