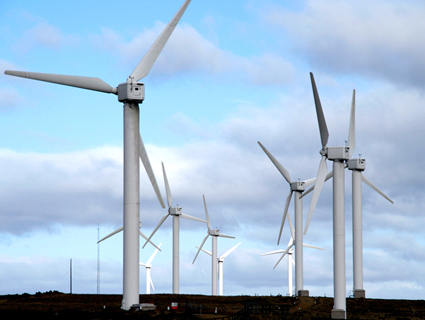 In the midst of this week’s fiscal cliff hullabaloo, with tax hikes for many Americans, tax breaks for Big Oil, and a superstorm of righteous outrage over withheld storm aid, you’d be forgiven for not noticing the climate win that slipped in at the eleventh hour: a long-awaited extension of the wind energy Production Tax Credit, a federal incentive that has for many years been the bread and butter of the wind industry, providing $1 billion each year to keep wind competitive against heavily-subsidized fossil fuels.

Despite being a record-setting year for wind installations, 2012 was a nail-biter for many in the industry, who feared Congress would axe the credit and send the industry from boom to bust, as has happened several times in the past when the credit has not been extended. The industry’s trade group was a clearinghouse for grim prognostications: Some 35,000 jobs lost and up to a ninety-percent drop in wind projects, should the credit not be passed. Even with the extension, the industry’s financial backers were so spooked by last year’s uncertainty that investments are almost sure to fall in 2013.

“We’ve effectively killed 2013 by waiting this long to extend [the PTC],” Jacob Susman, CEO of wind installer OwnEnergy, told me a few months ago.

And while the extension was an excuse for wind folks from Colorado to Iowa to Boston to pop an extra bottle of champagne, the industry ain’t out of the woods yet: The recent extension is only for one year, which means the battle to wring money from Congress will need to be fought all over again in just a few months. Indeed, the complaint one hears most often from industry leaders is that the constant political kowtowing necessary to secure this essential tax credit makes it nearly impossible for the industry to secure long-term growth. That’s very different from fossil fuels, whose benefits, as my colleague Andy Kroll points out, are “baked into the tax code.”

But this extension comes with at least one big improvement: In the past, to secure the credit, wind projects had to be delivering power to the grid before the credit’s expiration date at year’s end. That led to a huge push to get projects up and running in the final months of 2012, but also threw up a barrier to any projects that got started too late. This version sets a lower bar: The credit is now available to any projects that break ground in 2013, giving everyone from turbine manufactorers to installers to investors much more breathing room on a realistic timescale, which David Roberts at Grist says is equivalent to extending the old version for two or three years.

The challenge for Big Wind this year will be to work with Congress to find ways to keep the industry competitive in the long term, while unleashing it from year-to-year political turmoil.

“The extension is a very important piece of legislation,” industry researcher Matt Kaplan told the Financial Times. “The big question, though, is what comes next.”