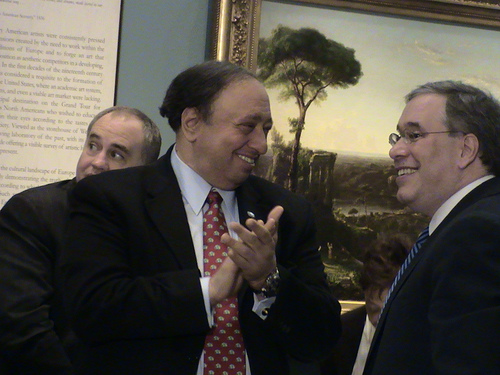 John Catsimatidis, the controversial billionaire Republican whose business empire includes real estate, an oil refining company, and the Gristedes supermarket chain, is running for mayor of New York City this year. For real. He told me Friday morning that he plans to officially announce his candidacy at a press conference on Tuesday.

Catsimatidis flirted with entering the 2009 mayoral race, going so far as to hire staffers and set up an exploratory committee. But he never jumped in,  and Michael Bloomberg went on to narrowly defeat city comptroller Bill Thompson. (Bloomberg is term-limited and cannot run again.) Late last year, Catsimatidis started a campaign account for the 2013 race and talked publicly of exploring options, sparking speculation that he would again flash some leg before ultimately retreating.

Catsimatidis, like Allon, used to identify as a Democrat. In the 1990s, he raised huge anounts of money for President Bill Clinton’s reelection campaign. But he jumped to the Republican Party in 2007 because, he explained at the time, doing so gave him clearer path to the general election, with several prominent Democrats rumored to be running. Since then, Catsimatidis has stuck with the GOP and blasted Barack Obama as an inexperienced, ineffective, anti-business president. In December, he drew a comparison between singling out wealthy Americans for tax increases and the Holocaust. “We can’t punish any one group and chase them away,” he asserted on a local teelvision show. “We—I mean, Hitler punished the Jews. We can’t have punishing the 2-percent group right now.” (He subsequently backed away from the Hitler analogy, adding, “I think the rich should pay more in taxes, I agree with that 100 percent, but everybody should feel the pain a little bit.”)

Catsimatidis, not surprisingly, backed Mitt Romney in 2012, raising millions in campaign cash in the New York area for the Romney-Ryan ticket. (He still attends fundraisers for Democrats, he says.)

This Sunday, Catsimatidis is hosting a fundraiser for Senate Minority Leader Mitch McConnell (R-Ky.) at his apartment. Castsimatidis notes that this is his way of thanking McConnell for not impeding the $60 billion Hurricane Sandy relief bill that passed the Senate in December. Asked why he is fundraising for McConnell, who voted against the first Sandy relief bill, Catsimatidis says the Kentucky senator could’ve done much to kill the bill, but elected not to do so. “What should I do instead? Kick sand at McConnell [for voting against the measure]?” he asks. “No, I say thank you.”