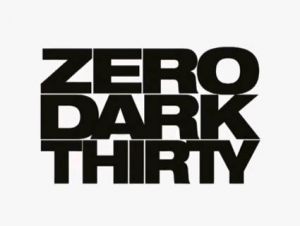 As the criticism over the misleading torture scenes in Zero Dark Thirty has intensified, the filmmakers and their defenders among the nation’s film critics have fallen back on increasingly strained rationalizations for why the film unfolds in a manner that is at odds with the public record.

Specifically, a lengthy Senate investigation and the CIA itself have determined that the agency alias of Osama bin Laden’s courier was not identified via one of the agency’s so-called enhanced interrogations. Yet that is exactly what the film portrays in this clip, originally posted by blogger Matt Cornell (H/T Greg Mitchell).

The detainee in the film isn’t being tortured at the moment he gives up the courier’s alias, the clue that led the CIA to OBL’s secret compound. He already had been tortured, and he starts spilling names only after his interrogator threatens to hang him up by his arms again. Some defenders of the film, such as Mark Bowden, have said it is faithful to the facts, arguing that the torture of Mohammed al-Qahtani had “focused” the CIA’s attention on the courier.

If that’s true, it would at least be a defensible rebuttal—although the public record leans against any prominent role of torture in ferreting out bin Laden. And to my knowledge, Zero Dark Thirty screenwriter Mark Boal has not actually made this argument. Neither has director Kathryn Bigelow, who has simply insisted that depicting torture is not endorsing it—as if her critics were idiots incapable of understanding that. Indeed, Salon‘s Andew O’Heir, one of the film’s many defenders, recounts documentary filmmaker Michael Moore at a recent awards dinner blaming “a tendency among many liberals to leap to conclusions and resist deep thinking.” So if you object to Zero Dark Thirty‘s inventing a historical role for torture where none has been proven even as it makes a claim to quasi-journalistic accuracy, you’re an uncultured philistine.

Rather than defend the scene above as faithful to the public record—or whatever Boal was told during his meetings with the CIA—Boal has insisted that it is not an endorsement of torture:

“I’m not saying the film is a documentary of everything that happened, but it’s being misread,” he said. “The film shows that the guy was waterboarded, he doesn’t say anything, and there’s an attack. It shows that the same detainee gives them some information, which was new to them, over a civilized lunch. And then it shows the [Jessica Chastain] character go back to the research room, and all this information is already there—from a number of detainees who are not being coerced. That is what’s in the film, if you actually look at it as a movie and not a potential launching pad for a political statement.”

Boal doesn’t seem to understand his own movie. I’m not sure what kind of messed-up lunches he’s been going to, but I don’t usually face having my lunch mate string me up by my arms if my repartée is inadequate. Moreover, what Boal refers to as “detainees who are not being coerced” is actually a montage of men being hung, hooded, and stripped of their clothing—not all of them are being coerced but it’s clear that many of them are.

Boal’s rationale isn’t that the scene is historically accurate—see quote above—but that it doesn’t show torture producing key intelligence. Except that only the most (ahem) tortured interpretation of could conclude that it shows anything else.