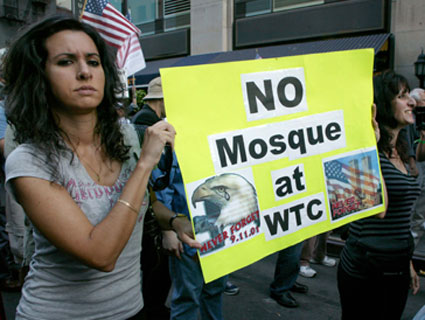 Over the last four years, a die-hard cadre of activists and their allies in Congress have dragged the Republican party into a fever swamp of Islamophobia and barely-concealed anti-Muslim bigotry. In their paranoid scenario, Islamic Shariah law is creeping into American courts; the Department of Justice has come under the sway of the Muslim Brotherhood; and the president’s engagement ring includes secret writing that indicates Muslim loyalties.

But after a November election that saw three of the party’s loudest voices on “creeping Shariah” defeated—and the GOP presidential nominee ignore the issue entirely—the anti-Islam movement within the Republican party may have peaked. Wary of further alienating a once-promising conservative constituency, mainstream Republican leaders have sought, publicly and behind closed doors, to distance themselves from the loudest of the Muslim-bashers in their midst.

“They have gotten a bit of bad odor,” says GOP power-broker Grover Norquist, who has pushed to change his party’s tone on Islam.

Randa Fahmy Hudome, a former Bush administration official, Washington lobbyist, and prominent Muslim Republican, notes: “There is a self-policing factor in the Republican party, when some members get a little off base on some of these issues. That’s the state of play right now.”

A turning point came in July, when Rep. Michele Bachmann (R-Minn.), along with four Republican colleagues, signed a letter demanding an investigation into the Muslim Brotherhood’s supposed infiltration of the State Department. The letter singled out a top aide to Secretary of State Hillary Clinton, Huma Abedin. Bachmann and her colleagues, deploying tenuous evidence and guilt-by-association, charged that Abedin should not have been given a security clearance because of alleged ties to Muslim radicals.

Days later, Sen. John McCain (R-Ariz.) had condemned Bachmann’s letter from the floor of the Senate, calling it “unwarranted and unfounded” and “scurrilous.” Speaker of the House John Boehner piled on, calling the letter “dangerous.” The chair of the House intelligence committee, Rep. Mike Rogers (R-Mich.), emphasized to USA Today that though she served on his committee, Bachmann’s allegations did not have the committee’s imprimatur. Sen. Marco Rubio, the Florida senator and tea party favorite widely touted as a potential 2016 contender, publicly denounced the allegations promoted by Bachmann and her allies, like former Reagan official and longtime anti-Shariah activist Frank Gaffney.

Behind the scenes, GOPers worked to smooth over hurt feelings. Rep. Keith Ellison (D-Minn.), who in 2007 became the chamber’s first-ever Muslim member, says several Republican House members quietly approached him to apologize for the Abedin episode. Norquist, who runs the influential group Americans for Tax Reform, says that following the letter controversy, “We have heard back from a bunch of Hill staffers—’We are keeping our guy away from Gaffney and those guys, they’re crazy.'”

Gaffney has been blacklisted from the American Conservative Union, which hosts the annual CPAC confab, since 2011, after accusing Norquist and an associate, Suhail Khan, of aiding the Muslim Brotherhood. He’s also become persona non grata at the Weyrich lunches, the weekly conservative strategy sessions first initiated by the late social conservative guru Paul Weyrich. His insistence on accusing anyone who deviates from his anti-Shariah line of terrorist sympathies has put him on the outs with the Republican establishment. (Gaffney did not respond to requests for comment.)

The Abedin letter prompted the most public break the party leadership had made from the anti-Muslim fringe since George W. Bush was president. During the Bush years, a vocal anti-Islam movement on the right was kept in check by a Republican administration that went out of its way to note the distinction between the average Muslim and the extremist fringe who carried out the 9/11 attacks. (There was a political motivation, too: Bush backers credited Muslim voters with helping turn Florida red.)

But as Bush’s popularity waned during his second term and the administration grew desperate for allies wherever it could find them, the rebukes of anti-Muslim figures like Pat Robertson came to a stop. “Or if it happened,” Norquist says, “we stopped hearing about it.”

When Barack Obama took office, the dam broke. Anti-Muslim activists were on television and leading protests in the streets, spreading conspiracy theories about the president’s birth and his administration’s supposed stealth Islamist agenda. Since 2009, two-dozen states introduced legislation to prohibit the non-existent threat of Shariah law from state courts. Five of them passed. Rep. Peter King (R-N.Y.), the chairman of the House committee on homeland security, held four hearings on the alleged radicalization of the American Muslim community. Conspiracy theories about American Muslims seeking to impose Saudi-style Islamic law drove communities nationwide to attempt to block construction of mosques, and in New York, the proposed Islamic Community Center in lower Manhattan triggered an election-year scandal in 2010.

By elevating fringe figures and their political allies into the public view, the anti-Islam movement’s success may have been its undoing. And even before the GOP establishment’s public criticism of Bachmann, there were signs that some Republicans had grown uncomfortable with the rhetoric of the Muslim-bashers.

One private intervention came during the summer of 2011, when then-GOP presidential candidate Herman Cain attended one of Norquist’s weekly, off-the-record breakfasts, a gathering for DC’s conservative elite. The assembled big-shots were disturbed by some of Cain’s comments on the campaign trail about Muslims. A Think Progress reporter had captured him boasting that he would never appoint a Muslim as a member of his cabinet. Weeks later Cain had argued that cities like Murfreesboro, Tennessee—where activists were attempting to block a new Islamic center—should be allowed to outlaw the construction of mosques.

“It really bothers me when you say this, because that’s scary,” Norquist recalls one of the participants, who was Jewish, saying. Cain sought to reassure his hosts that only Muslims would be subjected to a loyalty test before serving in his administration. “Oh no, not Jews—just Muslims,'” he said. But Norquist’s other guests were insistent: “You’re not getting it.”

After the meeting, Cain’s tone shifted noticeably. He took a much-publicized visit to a mosque in Northern Virginia to make amends. (Cain, contacted through his publicist, did not respond to a request for comment.)

There are also indications that some Republicans who warned the loudest of an Islamist threat have had a change of heart. In 2009, Rep. Sue Myrick (R-N.C.) held a press conference on Capitol Hill to warn of a plot by Islamic extremists to infiltrate Congress by applying for internships—a plot that was detailed in a conspiracy-laden book called Muslim Mafia by P. David Gaubatz and Paul Sperry. Myrick had written the foreword for that book.

Two years later, in September 2011, she invited Mohamed Elibiary, then the head of a Muslim nonprofit, to a meeting at her office to offer an olive branch. “She let me know that she doesn’t hold any bad feelings towards the community,” Elibiary says of their hour-long meeting, “and that some of the previous things, like her writing the foreword for the Muslim Mafia book, was done through bad advice she received.” (Myrick, who is retiring in January, did not respond to multiple requests for comment.)

It wasn’t Myrick’s only attempt to make things right. She conveyed a similar message to Ellison. “I don’t think she ever knew what she was really getting herself into,” Ellison says. “She was a little stunned that she would be associated with hating a religious minority group. I think she re-evaluated a number of things, and I think she’s far less aggressive than she used to be.”

The biggest wake-up call for the GOP’s Muslim-bashing lawmakers came from voters. In South Florida, long a hotbed for anti-Islam politicians, the state’s two most high-profile voices on the issue, Rep. Allen West and onetime state house majority leader Adam Hasner, both lost congressional races in November. West, who has said that Islam is a “totalitarian, theocratic political ideology,” hosted a meeting on Capitol Hill in 2011 alleging that the Muslim Students Association was a Muslim Brotherhood front. Hasner had warned tea party groups about the dangers of “Shariah-compliant Islam” and “multiculturalism.”

“She was a little stunned that she would be associated with hating a religious minority group,” Ellison says of Myrick.

West and Hasner weren’t the only anti-Muslim stalwarts to be vanquished. Rep. Joe Walsh (R-Ill.) lost to Iraq War veteran Tammy Duckworth (D-Ill.) after warning of a radical strain of Islam spreading through Illinois suburbs. Walsh’s backers, including anti-Muslim blogger Pamela Geller, passed around a video of Duckworth, who lost both of her legs and injured her right arm in Iraq, covering her hair during a visit to an Islamic cultural center in Illinois, implying that she was too sympathetic to Muslims.

Certainly the damage to the GOP—and its relations with the Muslim community—won’t be easily repaired. As a new study published in the American Sociological Review notes, the Republican Party’s tacit endorsement of its loudest anti-Islam elements—and conservative media outlets like Fox News that aired, promoted, and legitimized this fear-mongering—had the effect of mainstreaming what were once fringe theories. In a poll taken by the Arab American Institute in August, a majority of Republicans expressed an unfavorable view of Muslims. And in August, delegates at the Republican National Convention voted to include a plank in their platform affirming their opposition to Shariah law.

“I think it’s a little too early to tell whether the tide has changed or not,” says Ellison, the Minnesota Democrat. The GOP crusade against Islam has “certainly stalled. Will it [flare] up again or will it continue to stall or maybe decline, I don’t know that.”