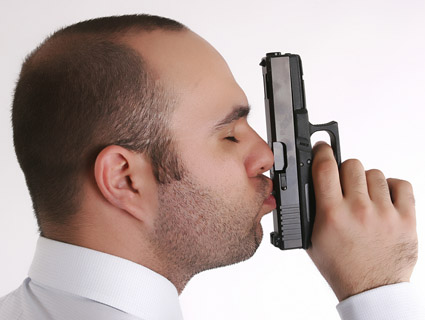 A new survey conducted by the National Rifle Association finds that—surprise!—NRA members really, really like the NRA and its policies. More specifically, it found that 98 percent have a favorable view of the gun-rights organization and its absolutist stance. On the flip side, 93 percent have an unfavorable view of President Barack Obama; New York Mayor Michael Bloomberg squeaks by with an 80 percent disapproval rating. Moreover, the NRA finds its members overwhelmingly reject gun-control measures that nobody in Washington is seriously proposing.

Beyond the Saddam-like approval ratings, the survey of 1,000 NRA (PDF) members shows that the vast majority “are united in their desire for Washington to focus on keeping firearms from the mentally ill and to reject unconstitutional gun control measures that infringe on Second Amendment rights.” More than 90 percent support keeping firearms away from the mentally ill, 89 percent oppose an assault-rifle ban, 83 percent oppose a ban on high-capacity clips, and 82 percent back the NRA’s proposal to put “armed security professionals” in every public school.

And the one-sided responses keep coming as the survey tosses out some wacky hypothetical gun laws: 92 percent of NRA members say they oppose “government confiscation of certain semi-automatic firearms…through a mandatory buy-back program,” and 92 percent also oppose “a new federal law banning the sale of firearms between private citizens.” When presented with Obama’s claims that “a balanced approach” toward reducing gun violence is needed, 79 percent say they still suspect “his real goal is to pass sweeping gun control regulation that will take away our 2nd Amendment rights.” (Related: New research shows that the more informed political conservatives are, the more likely they are to believe in conspiracy theories.)

The organization says the survey is “the only legitimate survey of NRA members in existence,” suggesting that external surveys, such as this one conducted for Bloomberg’s Mayors Against Illegal Guns—by longtime Republican pollster Frank Luntz—are bunk. That survey found that 74 percent of NRA members support requiring criminal background for all gun purchasers. (Currently, around 40 percent of gun sales are conducted without background checks due to an NRA-backed loophole.)

If the NRA’s survey is accurate, it suggests that its members are not only totally in sync with its leadership, they are also far more gung-ho than most gun owners or conservatives. A recent survey by the Pew Research Center finds widespread support among gun owners for some of the proposals shot down in the NRA survey. Some 90 percent of gun owners told Pew that they support keeping guns out of the hands of the mentally ill. But from there the two surveys split: Pew reports that 54 percent of gun owners support a ban on semi-automatic weapons, 49 percent support a ban on high-capacity clips, and 63 perecent want more armed guards or police in schools. These numbers roughly line up with the responses from self-identified Republicans and men—who presumably make up the bulk of the NRA’s members.

The NRA trumpets its new survey’s authenticity, but who makes up the rank and file it purportedly samples? Good luck drawing a bead on that—the survey provides no information on the respondents’ gender, age, race, or other key demographics. However, it does record that 35 percent of respondents live in rural areas, suggesting that NRA members are more than twice as rural as the US population as a whole. And unfortunately, the survey does not provide any clues about the NRA’s true size; with a sample of 1,000 and a margin of error of 3.09 percent, the group could have anywhere from 2 to 5 million members—or even the 4 million-plus it currently claims.