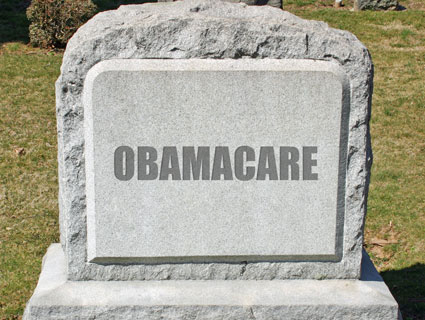 Since Obamacare was enacted in March 2010, House Republicans have voted dozens of times to repeal it. And no, the Supreme Court decision upholding the sweeping health care act hasn’t stopped those efforts. While these kinds of moves are pretty much symbolic at this point, the law’s conservatives foes are making one more push that they are pretty sure will finally do the trick. Too bad it won’t work.

The socialism-killer, the Obamacare haters say, is the states’ power to refuse to set up health insurance exchanges, the online marketplaces where people who don’t get insurance through their employer will be able to shop for coverage and pick up federal subsidies to help pay their premiums. If states don’t set up their own exchanges—and most Republican governors have already refused to—the federal government will do it for them. Still, conservative news sites and advocacy groups are spreading the word that this spells the end of the Affordable Care Act. “States’ Refusal to Establish Exchanges Could Undo Obamacare,” says the Daily Caller. “Obamacare in Peril as GOP Governors Refuse to Run State Exchanges,” says PolicyMic. The tea party group FreedomWorks has launched a snazzy campaign with a website called BlockExchanges where you can consult an “action map” to find out “where your state stands on resisting the Obamacare exchanges” and join the “last stand in the fight against the Left’s health care takeover.”

“It’s a Republican fantasy,” says Ethan Rome, executive director of Healthcare for America Now, which backed Obamacare. The block-the-exchanges arguments “are all grounded in same lack of fact.” Nonetheless, their proponents have a muddled bunch of reasons for why they will prevail, centering around cost, administrative burden, and a fun legal theory.

The Department of Health and Human Services has said that because more than half of the states will not create their own exchanges, the federal government will have to set up more than it expected. Some on the right are claiming that the added expense from this will doom the law. “The Obama administration cannot afford to absorb these costs,” asserts Tony Lee at Breitbart. “HHS officials must be sweating,” Dean Clancy, legislative counsel at FreedomWorks, opined last month at the Daily Caller.

Except that there is no added expense. HHS has budgeted for 23 million people to get health insurance through the exchanges regardless of whether they are federal- or state-run. The federal marketplaces are “scalable to accommodate as many states as need be,” according to an HHS spokesperson.

“This was law democratically enacted, challenged in the Supreme Court, and passed the test, and now [Republicans] are trying again. They’re desperate.”

Other Obamacare foes admit they’d rather have the blame for the exchanges’ inevitable failure land on the feds rather than the states. Conservative pundit Dick Morris has sent out more than 40,000 petitions urging folks to protest the marketplaces because they are “likely to be an administrative nightmare…all of our fears of federal incompetence will probably be realized when these new exchanges are established, [and] if the exchanges are federal, Obama will get the blame which he will richly deserve. The incompetence of federal regulation will be manifest and the frustration will cause many to turn against the Obamacare law.”

HHS says the exchanges will be up and running in time to meet the deadline when all Americans must have health coverage. The Department “is confident that every state will have an exchange in place by January 1, 2014, run either by the state, HHS, or as a partnership,” says an HHS spokesperson. Timothy Jost, a health care law scholar at the Washington and Lee University School of Law who regularly meets with HHS officials on implementation of the legislation, says the department has known for some time that it was likely that many states would not set up exchanges, and that “they’re on track and ready to go.”

But probably the most widely touted reason given for why obstinate Republican governors will be able to take Obamacare down is a legal theory pushed by conservative scholars like Michael Cannon, the health policy director at the libertarian Cato Institute. It goes like this: Congress only intended the subsidies and tax credits that help consumers buy health insurance to be available through state-created, not federally created, exchanges. If these benefits aren’t available in states with federally run exchanges, the argument goes, then other key components of the law, like the requirement that employers offer health insurance, and that most people must buy insurance, also fall apart in those states.

Jonathan Gruber, who helped write former presidential candidate Mitt Romney’s Massachusetts health care law as well as the Affordable Care Act, calls this theory a “screwy interpretation” of the law. “It’s nutty. It’s stupid,” he says. And beyond that, “it’s essentially unprecedented in our democracy. This was law democratically enacted, challenged in the Supreme Court, and passed the test, and now [Republicans] are trying again. They’re desperate.”

Gruber and Jost both say the interpretation conservatives are peddling has nothing to do with congressional intent. There is language scattered throughout the bill, Jost says, that refers to state-established exchanges, but as a whole, it’s obvious that the law treats state and federal exchanges equally. “If you don’t know anything about reading statutes, you assume that the way courts do it is by taking a sentence here and a sentence there,” he says. “But if you look at it in context, the whole statute hangs together.” If Cannon’s interpretation is right, Jost says, it would mean that Congress wrote “the law to set up federal exchanges and then said they can’t do anything.”

Nonetheless, Cannon’s idea has real traction. He has been trotting around the country urging governors to resist implementation of the marketplaces. On Tuesday he testified at the Florida statehouse (as did Gruber, who presented the opposing position). Oklahoma Attorney General E. Scott Pruitt has filed a lawsuit challenging whether federal exchanges have the power to distribute tax credits and subsidies. He wants the court to invalidate an IRS rule that plainly states that federal exchanges have the same powers as state exchanges. More lawsuits could be on the way, but Jost points out that a new Supreme Court ruling made this Monday will make these kinds of cases futile.

It’s unclear whether those pushing this kind of legal reasoning know that it’s fatally flawed and are using it just to spite Obamacare, “but these poor states don’t know any better,” Gruber says. “It’s a very unfortunate thing that states that probably would do better with a state exchange will get a federal exchange because Cato is able to convince them,” Jost says.

Then again, the last-ditch campaign to kill Obamacare may be doing more damage to the small-government cause than to the states. “By refusing to participate in running their own exchange, the conservative refuseniks are making the federal system bigger,” Rome says. “It’s an obvious irony of their own making.”