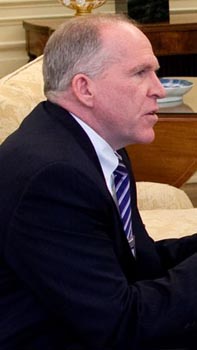 White House Counterterrorism adviser John Brennan briefs the president in the Oval Office in 2010. <a href="http://www.flickr.com/photos/whitehouse/4579705814/" target="_blank">Flickr/White House </a>

Two top senators have promised to ask John Brennan, Obama’s nominee to head the Central Intelligence Agency, about his views on torture before they vote on whether to confirm him to the post.

“I will be discussing with Mr. Brennan the Intelligence Committee’s recently completed report on CIA detention and interrogation operations from 2001 to 2009 and will ask how he would respond to the report’s findings and conclusions if confirmed,” Senator Dianne Feinstein (D-Calif.), chair of the Senate Select Committee on Intelligence, said Monday. A spokeswoman for Senator John McCain (R-Ariz.), an outgoing member of the committee, said McCain planned to question Brennan about his views on torture and the Senate report in writing. The Senate Intelligence Committee recently completed a three year review of the CIA’s detention and interrogation policies during the Bush administration, but the report has not been released to the public. (An unclassified version of the report may be released at some point in the future, after the Senate hears from the CIA and the White House about whether they think that’s wise.)

McCain also said Monday that he planned to scrutinize “what role [Brennan] played in the so-called enhanced interrogation programs while serving at the CIA during the last administration, as well as his public defense of those programs.” Brennan previously defended coercive interrogation other than waterboarding.

The CIA’s handling of its contacts with the filmmakers behind Zero Dark Thirty, a movie dramatizing the hunt for Osama bin Laden, could also come up. Feinstein, McCain and Senator Carl Levin (D-Mich.) sent a letter to the acting director of the CIA, Michael Morell, asking for information on the Agency’s cooperation with the filmmakers, because the film left the “clear implication that information obtained during or after the use of the CIA’s coercive interrogation techniques played a critical role in locating Osama Bin Laden.” The recently approved Senate intelligence committee report comes to the opposite conclusion, saying that those techniques did not help in locating the Al Qaeda leader. If the CIA doesn’t respond to the senators’ request before Brennan’s confirmation hearing, the movie could come up as an issue.

Morell released a statement in December critiquing Zero Dark Thirty for taking “significant artistic license, while portraying itself as being historically accurate.” Specifically, Morell wrote, “the film creates the strong impression that the enhanced interrogation techniques that were part of our former detention and interrogation program were the key to finding Bin Laden. That impression is false.”