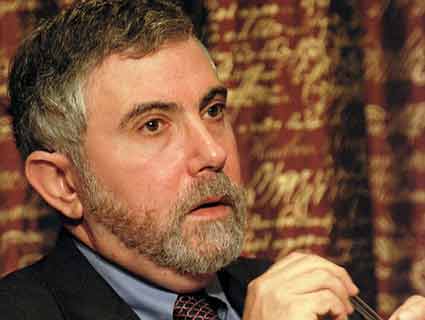 There are few political commentators who excite such passion (whether admiration or, on the other end, rage) as New York Times columnist Paul Krugman. The reason seems obvious: He writes directly about one of the most central issues in politics—the economy—and does so decisively and definitively. The man is, after all, a Nobel laureate in the field. But unlike so many other scientists and experts, he also happens to have a way with words and little inclination to pull punches.

Krugman’s latest book, End This Depression Now!, makes a strong case that the current focus on cutting budget deficits is misplaced. An economic crisis like this, with lingering high unemployment, demands a big infusion of government stimulus, argues Krugman. In contrast, cutting spending or imposing austerity only worsens things—just as we’ve seen of late across Europe.

How sure is Krugman about all of this? And how do we know that he’s right, and his very, very-sure-of-themselves opponents are actually dead wrong?

I recently had the privilege of interviewing Krugman about precisely this for 30 minutes on the Point of Inquiry podcast, which I cohost. Because we focus on science, I framed the discussion around what counts as science in economics—and conversely, what counts as pseudoscience. For example, I asked, how about the idea that cutting taxes increases revenue to the government? Krugman’s response: “That’s pure crank…nobody believes that, except the entire Republican party.” (Ouch.)

“The evidence is in. Every place that has imposed austerity has seen a really sharp economic downturn.”

And what about the idea that the 2009 stimulus bill failed to create any jobs? “That’s a very marginal position,” Krugman said. A few economists have supported it, he explained, but the majority of experts in the field think the stimulus, although not necessarily strong enough, do think it had a substantial effect.

Krugman’s central point is that Keynesianism is well established in economic science, meaning that under the present, depressed economic conditions, the US government needs to spend to stimulate the economy. By contrast, cutting spending, or imposing austerity, is a terrible blow to a struggling economy. “We’ve had incredible, teeth-rattling austerity in Greece and Ireland,” Krugman explained on the show, “and the evidence is in. Every place that has imposed austerity has seen a really sharp economic downturn.”

So, we asked, if Keynesianism thinking is the key to fixing our present economic woes, then why won’t people listen? Why are we currently so obsessed with deficits?

Krugman’s answer was twofold: People make up their minds about economics based on heuristics and shortcuts—for instance, the misleading metaphor that likens government finances to the budget of an individual family—and Keynesianism can be complex and counterintuitive. It also runs up against the popular notion that the government shouldn’t lean on the scales, because a fair system is one in which people get ahead or fall behind based on their own merits, without external help. As Krugman explained, that’s not actually how it works at all—you can fail in this world for reasons that are totally beyond your control:

The economy is an interactive system. Money flows in a circle. My spending is your income, your spending is my income. And that means that your destiny has a lot to do with what other people are doing. You can lose your job, you can be in big trouble, not because we’ve done anything wrong, but because there’s not enough spending and the economy is depressed.

For more from our discussion, including Krugman’s views on whether economic reason actually has a chance of prevailing against ideology, listen to the full episode of Point of Inquiry here.