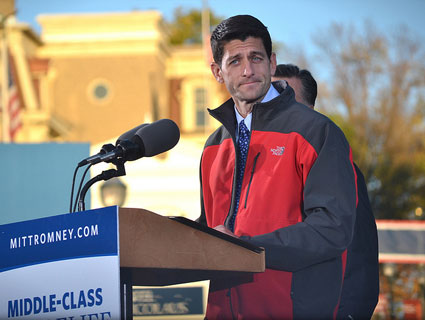 Rep. Paul Ryan (R-Wis.) is taking back what he said about “takers”—well, kind of.

In his second inaugural address Monday, President Barack Obama told Americans, “The commitments we make to each other through Medicare and Medicaid and Social Security, these things do not sap our initiative, they strengthen us. They do not make us a nation of takers; they free us to take the risks that make this country great.” My colleague David Corn called that line a slap in the face of the tea party, but it was targeted at one person in particular—Ryan, Mitt Romney’s ticket-mate, who has a long habit of decrying the gap between the “makers and the takers” in America.

On Tuesday, Ryan took the president’s bait during an appearance on Laura Ingraham’s radio show. When guest host Raymond Arroyo played a tape of one of Ryan’s “makers and takers” comments and asked Ryan about Obama “implicitly” attacking him, Ryan responded that Obama had set up a “straw man.” He insisted that he believes Social Security and Medicare are “not taker programs.”

One problem: These assertions contradict what Ryan has said in the past about “makers” and “takers.” When my colleague Brett Brownell and I reported on Ryan’s “makers and takers” comments in October, we reviewed multiple examples of Ryan’s use of the phrase. Here’s how he used it in a 2011 interview with conservative Star Parker [emphasis added]:

Right now, according to the Tax Foundation, between 60 and 70 percent of Americans get more benefits from the government than they pay back in taxes. So, we’re getting towards a society where we have a net majority of takers versus makers.

The Tax Foundation study that Ryan is referring to includes government benefits “from all sources,” including Medicare, Social Security, and even national defense. This covers many benefits that go beyond actual checks—the Tax Foundation study derives its “60 to 70 percent” figure in part by assigning Pentagon spending as a “benefit” to each American family proportional to that family’s income. If the Tax Foundation hadn’t included Medicare and Social Security (and national defense, which Ryan might also hesistate to categorize as a “taker program”), the “between 60 and 70 percent” statistic Ryan cited would be significantly lower. Ryan can’t claim that 60 to 70 percent of Americans are “takers” and assert that Social Security and Medicare don’t count as taking.

The Parker interview wasn’t the only time Ryan talked about makers and takers in a way that suggested he thinks Social Security and Medicare recipients are takers. Here’s another example, from Ryan’s June 2010 appearance on “Washington Watch” with Rep. Walter Jones (R-N.C.)—a clip that’s on Ryan’s official YouTube page:

Right now about 60 percent of the American people get more benefits in dollar value from the federal government than they pay back in taxes. So we’re going to a majority of takers versus makers in America.

Again, the only way to claim that 60 percent of Americans are “takers” is by including Social Security and Medicare in your calculations. Clearly Ryan, who is a potential 2016 presidential candidate, now doesn’t want to deride those pillars of the social safety net as “taker programs.” But he can’t remake his record.